You have to be careful when you're writing a blog on the world-wide web, for you never know who is reading! Back on February 7th, I wrote a post about the immature King Eider that is currently wintering with us at Cape May and I commented on how I had been unable - from a quick scout round - to find a field guide that illustrated the plumage that the bird was currently in. This was not a comment on field guides, for illustrating every possible plumage would make for a pretty hefty tome. It was more a comment on just how hard it can be to identify a bird sometimes.

Well, Dave Nurney, a British birdwatcher who is well-known on the other side of the Herring Pond for his illustrations in bird books and magazines, recently emailed me to tell me that he had noticed the same problem in the UK, and had been addressing this through a series of identification articles that he had been working on with Dominic Couzens in Birdwatching Magazine (this being the UK publication, not the US one). These articles have led to a book which is due for publication this coming spring, called I.D. Insights: Identifying the more difficult birds of Britain & Europe. Dave's illustrations aim to cover more of those 'half way' plumages that many species go through as they gradually progress from juvenile to adult and below is the plate that he painted for one of the original magazine articles. 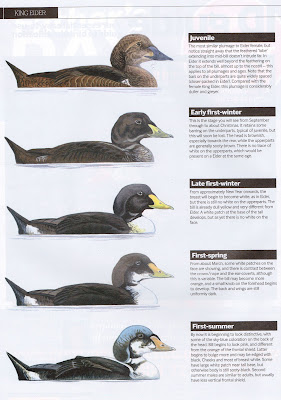 Male King Eider plumages during the first 12 months of life. Cape May's King Eider currently looks pretty much like the 'first-spring' illustration shown here; if he stays for a few more months, look for the bluish color starting to come on the head. Above illustration © 2012 Birdwatching Magazine/Dave Nurney.


Recent Sightings
If you are out and about over the next few days, keep an eye out for the male King Eider, who has recently been residing at the west end of the Cape May Canal, usually around the stone jetty at the mouth of the canal on the Higbee Beach side, though viewable from either side of the canal. A Common Eider has been present there too. A second King Eider has been reported from the coastguard base, again with Common Eiders. Along the bayshore, the Black-headed Gull continues and is most reliably seen from the sand bar off the west end of Miami Avenue in Villas. There's a good gathering of birds here most of the time and good viewing appears to be best shortly after high tide, as the water starts to pull back. Other birds here include plenty of Forster's Terns and good numbers of shorebirds, including Black-bellied Plover and occasional Red Knot. At nearby Cox Hall Creek WMA, Don Freiday recently reported an Eastern Phoebe and the same site remains a good spot for a great mix of sparrows, finches and an assortment of other birds, including Rusty Blackbirds.

If you can tackle the walk, a Golden Eagle continues to be reported periodically from Tuckahoe WMA (the banks are still undriveable after Hurricane Sandy damage, but you can walk in) and, even further afield, a Lesser Black-backed Gull was a nice find on 15th at Maple Avenue, Dividing Creek, Cumberland County.

Keeping us abreast of what is happening further offshore than us landlubbers usually venture, Tom Johnson's research work is currently turning up good numbers of auks out there. Tom's sightings on 12th included a Black-legged Kittiwake, Common Murre, Atlantic Puffin and 487 Dovekies. 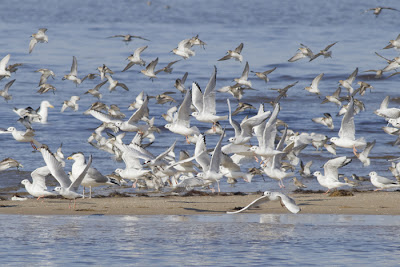 A wonderful melange of gulls, terns and shorebirds await you at Miami Beach in Villas [photo by Sam Galick]. 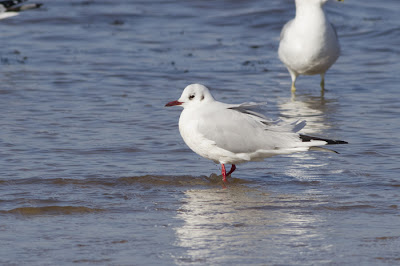 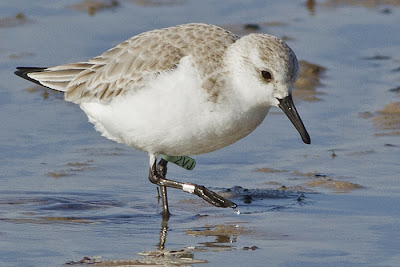 While you are at the beach, keep an eye out for banded or otherwise-marked birds. Such research projects rely heavily on citizen science to get sightings of marked birds, and this information can provide vital data on bird movements. This Sanderling wears a typical leg flag on the upper part of its left leg - the color of the flag and the alphanumeric code should be reported; here it is 2VJ on a light green flag. You can send all your sightings in via the USGS website [photo by Sam Galick].
Posted by Mike Crewe at 4:32 PM