Lunchtime today, I did a quick tour round of some duck spots, mainly because February is one of the most interesting months for ducks. Though the surface-feeders have often been thinned out locally by cold weather, the diving ducks can be present in good numbers still and it is often during these cold spells that odd ones turn up on smaller ponds and lakes, allowing closer than usual views. While scanning through some mixed flocks, I was also reminded that many first-winter diving ducks are in the middle of their often lengthy and protracted molt, which sees the males very slowly change from generally dull, female-type plumages into their more gaudy, adult-type garb. While this molt makes them interesting to people with a one-track mind like me, it can also be the one of the reasons why they can appear so tricky to people still trying to learn how to tell them apart.

As I scanned through a flotilla of Ruddy Ducks, I soon became aware that barely two of them were the same; the males in particular had vastly varying amounts of rufous coming into their plumage, as well as an array of different-sized cheek patches. Buffleheads too were rather complex. Adult males are nice and easy. But what about all those female types? Some are now showing much more white in the wing... The molt is so protracted that it is impossible for field guide publishers to find the space to show all the possible variations - and that's when the trouble begins. Just take a look at our wintering King Eider: 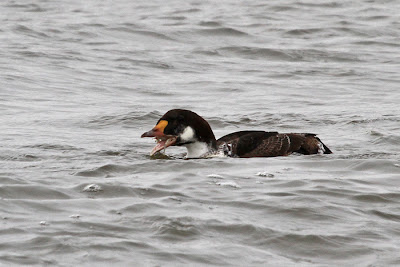 This first-winter male King Eider is wintering among the stone jetties off St Mary's at Cape May Point and is very slowly molting from an all dark bird into a vague resemblance of future glories to come. I did a quick scan through all the various field guides and other readily-available references at the CMBO store and I couldn't find a single book that would convince you that this is a King Eider! [Photo by Mike Crewe] 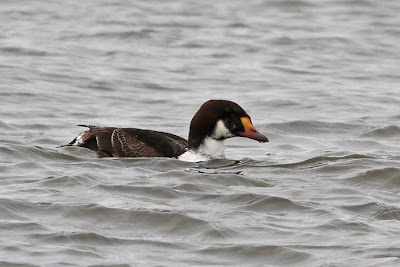 Compare our bird here with the photo in our post of December 12th 2012 and you will see that the white feathers of adulthood are very slowly increasing. Here, the bird has extra white now on the face, all of the front of the neck and throat, and also toward the back of the body. The bill seems just a fraction brighter too [photo by Mike Crewe].

So you could be forgiven for struggling to get to grips with this bird; the secret is to look at pictures of juvenile and adult birds and try to imagine what a bird part way between the two might look like. Do this for all similar species and you may well resolve your problem; in the case of eiders, adult male Steller's and Spectacled Eiders are not white on the chest, so they're ruled out, while male Common Eiders are white (not black) on the back and there is no sign of any white coming through on the back of our bird - the fresh-looking feathers on our bird are jet black and contrast with the brownish feathers of the wings. Don't forget other features too though, and with ducks that almost always means checking the bill for shape and color.

Another ducky conundrum came up with two Common Mergansers at Lake Champlain in Villas. Identifying the two birds present to species was pretty straightforward, but deciding whether they are female or male is less easy. Again, looking in the field guides doesn't help much as you would immediately plump for two females. But look closer (and if you click on the picture below, hopefully it will enlarge enough for you to be able to see the features!) and you will see some tell-tale signs: 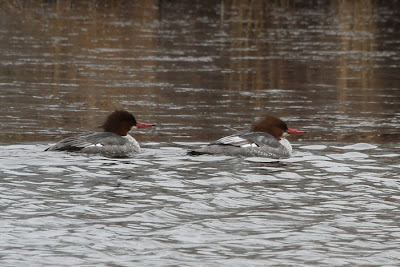 If you can zoom in close enough (*see below) to these two birds, you will see that they show not just a white chin, but also a small white patch of feathers at the base of the bill, separated from the chin patch by a dark bar. This ages them as first-winter birds. So, now that we know about the protracted molt, we can start to look for other clues. The right hand bird clearly has some very pale inner secondaries and this immediately tells us that it is a male. The left hand bird has the same face pattern (though difficult to see here), but the wing look darker. I would say that this second bird, from this view, could be either a male or a female, though there's a strong possibility that these two are already paired up so it may well be a female [photo by Mike Crewe].

When it's cold and you're looking for some thought-provoking birding from the comfort of your car, give your local diving ducks a good going over and see what you can come up with.

This article comes to you as volume 1 of things to do when you run out of Leonard Cohen records...

* Hint, to get a proper look at the pictures on our blog, you may have to change the settings on your computer to get rid of that daft slideshow thing that Google invented that prevents you from selecting a single picture and enlarging it...
Posted by Mike Crewe at 3:33 PM