Caracara Conundrum Continues - and other news

The New Jersey caracara conundrum continues; on February 6th, Sue Bennett Canale contacted me to say that she had seen a Crested Caracara that day, on a roadside pole in Galloway Township. Now, whether this is the bird that was at Cape May not so long back, or the bird that had been at New Gretna - or whether these were all one and the same bird - and whether these were all the same, different or otherwise from the Salem County bird (are you still following this?!), is anyone's guess. Whatever the facts may turn out to be, suffice to say that a Crested Caracara continues to be reported from Atlantic County and was still present to Saturday 9th at least. Many thanks for all those who emailed me with their sightings, and apologies for not having time to reply individually to all.

During this period, the bird has been seen most consistently right at the intersection of S. Odessa Ave and W. Duerer St., usually sitting on roadside poles. This intersection is just north of the intersection between Rt 30 (White Horse Pike) and 575 (S. Pomona Road). With just a small-handful of tunnel-visioned folks giving birdwatchers a bad name by trespassing at the recent Northern Lapwing spot in New Egypt, I feel duty-bound to add that this bird is adjacent to active farmland, and we respectfully ask any visiting birdwatchers to self-police themselves - for the sake of the reputation of our hobby. 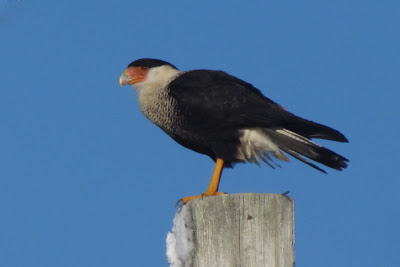 Sounds like everyone had a great time at the Cumberland County Winter Eagle festival yesterday, despite a pretty keen wind. Though owls were in short supply this year, a good number of other birds put on a great show and there was certainly enough Bald Eagles to go round.

In other news, the immature male King Eider continues at Cape May Point, as do Orange-crowned and Nashville Warblers in the state park, Red Crossbills  and the Eurasian Collared Doves at the point and a Tricolored Heron, which has been seen intermittently on Ocean Drive near Two-mile Landing. At Cox Hall Creek WMA/Lake Champlain, an adult male Common Merganser joined the two immature birds there just for the day on Saturday, with the two immatures continuing today. A nice flock of Rusty Blackbirds is wintering there too, as well as a great selection of sparrows and other birds. 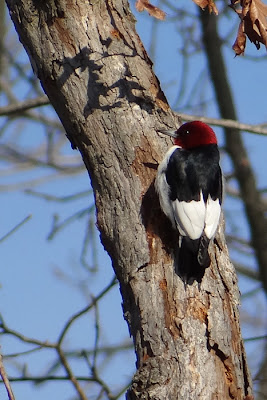 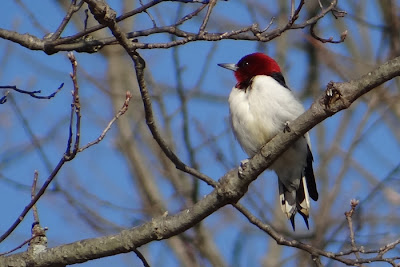 Marvin Hyett sent me these two awesome photos of a Red-headed Woodpecker near Vineland, in Cumberland County. Though this species seems still to be in decline, little pockets of birds do hang on in our region, so they are always worth keeping an eye out for. Let's hope the day doesn't come when your only New Jersey Red-head of the year is on your licence plate!! [Photos by Marvin Hyett]
Posted by Mike Crewe at 5:18 PM