Something for the Weekend...

The weekend doesn't look as though it's going to be too cold here, but there's a high chance of rain looming for Saturday. If you are keen to get out and get birding at Cape May - and why wouldn't you be! - there's plenty to keep you occupied here. Glints of sunshine in the past week have started the Northern Cardinals singing in backyards and the Red-winged Blackbirds displaying in the marshes. This morning at the South Cape May Meadows, I noticed some 30 or so Yellow-rumped Warblers feeding on the ice; this is the biggest group of this species I have seen so far this year and maybe they are starting to think about moving. American Robins are moving through the area in large numbers, with many males testing their vocal chords, and Red-tailed Hawks seem to be snuggling up to each other and doing all that 'pair-bonding' stuff. Spring isn't quite around the corner yet, but you can see it out there on the horizon I reckon. Here's a few ideas for the weekend: 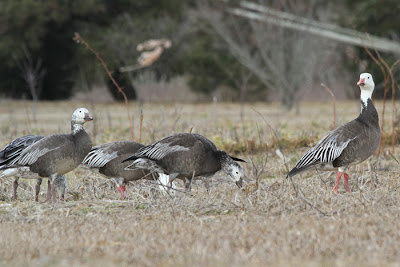 Keep an eye on Snow Goose flocks for something different among the white masses. This family of two adult and four first-winter blue morph Snow Geese was reported by Sam Galick at The Rea Farm on Stevens and Bayshore in West Cape May this morning. This dark color form of Snow Goose is uncommon but regular at Cape May, though a whole family is unusual. Note the clean white head and bright pink bill and legs of the adults, while the youngsters have mottled heads and pinkish gray bill and legs [photo by Mike Crewe]. 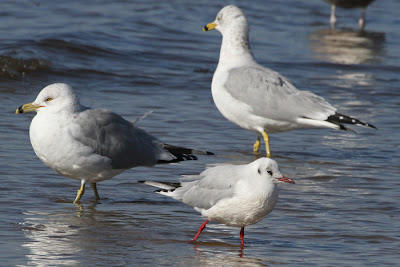 The adult Black-headed Gull, seen here with two Ring-billed Gulls, continues to hang out on the beach at the north end of Villas. A falling tide soon after high tide seems to be the best time to look for it. The wing pattern closely resembles that of Bonaparte's Gull, but look for the red bill and legs and slightly paler back [photo by Mike Crewe]. 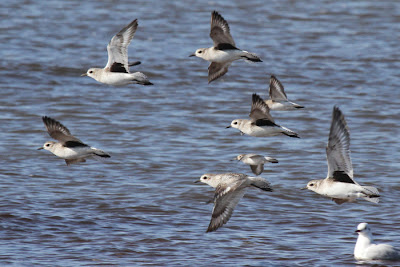 If you're looking for the Black-headed Gull, be sure to enjoy the shorebird spectacle also taking place along the bayshore now. Close views of Black-bellied Plovers give good opportunities to spot the black 'armpits' of these chunky birds [photo by Mike Crewe]. 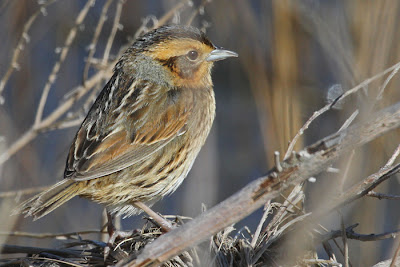 The highest tides of the month, associated with the full and new moons, are the best time to check the saltmarshes for wintering marsh sparrows. The next high tides are due early next week so it's a good time to scan along the edges an hour either side of forecast high tides for these ace skulkers. This Nelson's Sparrow was at Jake's Landing Road recently - look out for Saltmarsh and Seaside Sparrows too, as well as Clapper Rails [photo by Mike Crewe]. 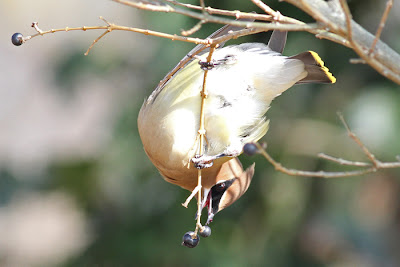 If you are walking around urban areas, keep an eye out for flocks of Cedar Waxwings polishing off the last of the season's berries. Watching them can be a lot of fun as they turn acrobatics to get at the last little fruits, dangling on the ends of the thinnest branches. This one is tucking into privet berries at the Pavilion Circle in Cape May Point [photo by Mike Crewe]. 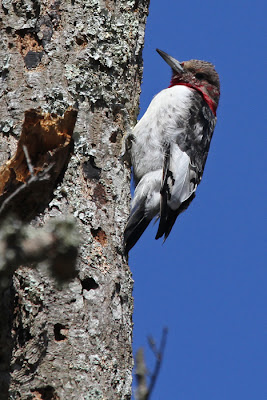 Cox Hall Creek WMA is always a great place to bird during the winter, when a nice mix of sparrows, blackbirds, finches, bluebirds and other birds can be found and enjoyed. This first-winter Red-headed Woodpecker was still present a couple of days ago at least, having spent the winter stashing food in dead tree trunks. Looks as though that red head is just starting to creep in now [photo by Mike Crewe]. 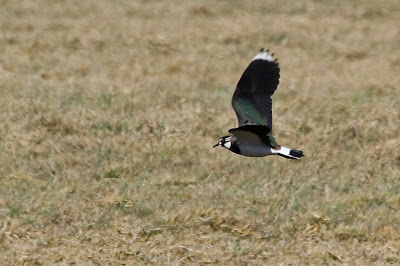 Having had a tricky knee issue lately, I've been getting ever more desperate for birds that can be viewed without a walk! Suffice to say that I had pretty much run out of new things to watch at Cape May so, under heavy disguise, I ventured out of the county and up as far as New Egypt in Ocean County to see the three Northern Lapwings that have been present for some time there now. This is a very common bird where I come from, but still a great one to see and well worth the visit if you have not already done so. The birds are wintering with Longhorn Cattle on Brynmore Road, about a mile and a half south-east of New Egypt [photo by Mike Crewe]. 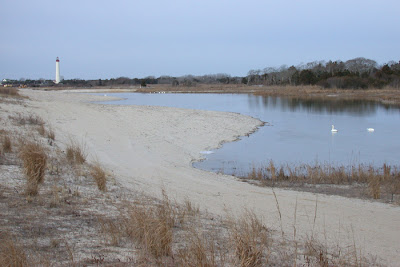 Last but by no means least, don't forget that our Friday evening walks at The Meadows start today at 4:30PM. Do come and enjoy some great birding, but while you are there, also notice the great work that has been carried out to maintain the trails and habitats. The main trails have all been elevated slightly and re-graded after the effects of Hurricane Sandy, while the Plover Ponds (seen above) have had a lot of encroaching vegetation removed. While removing plants on a nature reserve may seem odd, we have to remember that wildlife habitats need to be managed, or they will all end up looking the same and the wildlife that requires special conditions will lose out. These ponds need to be kept open to maintain their value as post-breeding feeding areas for Piping Plovers, so invasive, non-native willow and poplar seedlings have been grubbed out and the pond margins re-graded [photo by Mike Crewe].
Posted by Mike Crewe at 11:51 AM