February continues its dreary way along as we strum our fingers and wait for March. However, there's certainly birds out there to be enjoyed. A quick look out of my office window even now reveals a young Red-shouldered Hawk lurking menacingly close to the Northwood feeders, while a Hermit Thrush performs all kinds of acrobatic contortions in its attempts to feed on the Greenbrier berries hanging all shiny and inviting.

Out and about in the County, there is much to see; yesterday I spent some time out in the field for the first time in quite a while, as Megan, Richard Crossley and I took around another birder that was visiting the US from Britain - yes, my wife had to endure three Brits at once yesterday! Our friend David Lindo markets himself as The Urban Birder (look him up on line!) and is making great inroads getting people from inner city areas into enjoying their local open spaces and wildlife. Cape May Point State Park still has a fine selection of birds and, though recent cold weather has pushed many of the ducks off to more southerly climes, some approachable Lesser Scaup and a lone Tundra Swan - sadly being bullied by the Mute Swans there (isn't it time we dealt with the ecological disaster of Mute Swans here?) - were nice to see. Two Snow Buntings were feeding along the dune edge. At Sunset Beach, our local pair of Bald Eagles looked fabulous perched on the concrete ship; the female was making fishing sorties along the tideline and successfully catching small fish to eat. Plenty of Long-tailed Ducks were in the bay too. Up at Stone Harbor Point, at least nine Western Sandpipers can be found among the nice Dunlin flock there and at least two Semipalmated Plovers are with the Sanderlings. We also witnessed a Razorbill fly north right along the tideline, then return south again shortly afterward. There seems to be a small movement of Razorbills taking place offshore today, with Tom Reed reporting at least eight off Avalon this morning and another scattering off Two Mile beach, including one flock of ten birds.

From the Coastguard Unit, Chris Hajduk's reports include a Black-headed Gull on 11th, two Common Eiders on 13th and continuing Great Cormorants on the offshore pilings. Up to 12 Horned Larks are also wintering on grassy areas within the base. The best way to view birds here is either from the north end of Cape May at Poverty Beach (do not go beyond the Coastguard signs though) or from the jetty at Two Mile Beach, on the north side of Cold Spring Inlet. Last Sunday, Horned Larks were also showing well at Cape May Airport. 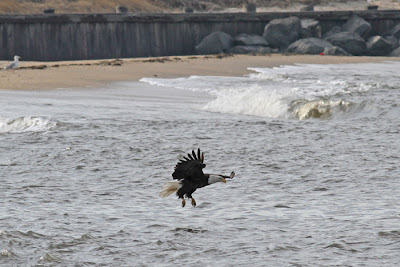 The female of our local Bald Eagle pair showed great skill and grace in being able to hunt small fish in the shallows off Sunset Beach yesterday [photo by Mike Crewe]. 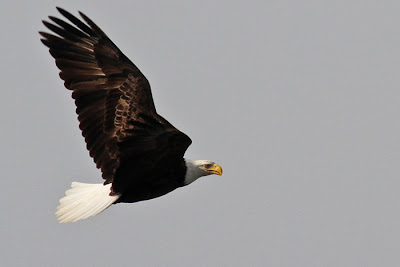 When you can get great views of Bald Eagles like this, then Cape May is certainly the place to be in February [photo by Mike Crewe]. 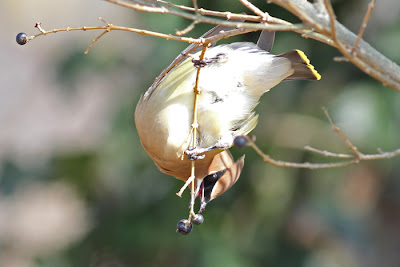 A small group of Cedar Waxwings has recently been working through the last of the privet berries in the circle gardens at Cape May Point [photo by Mike Crewe]. 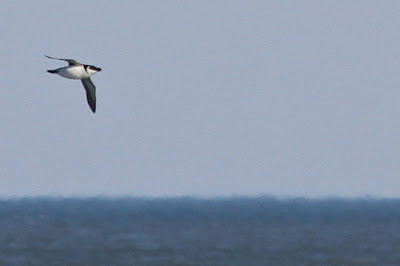 A Razorbill scuttling along the tideline at Stone Harbor Point yesterday [photo by Mike Crewe]. 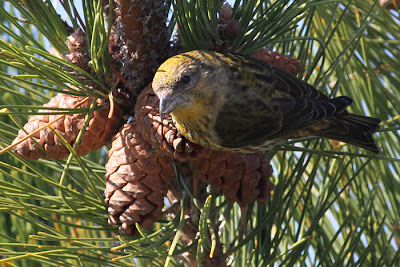 A party of up to 11 Red Crossbills (type 3) is still hanging out in the Japanese Black Pines in the dunes at Cape May Point. Keep an eye out for them, feeding acrobatically on the pine nuts. This odd-looking bird still wears the streaks of juvenile plumage but appears to be getting a few red feathers coming through now, so it looks as though it's a young male [photo by Mike Crewe]. 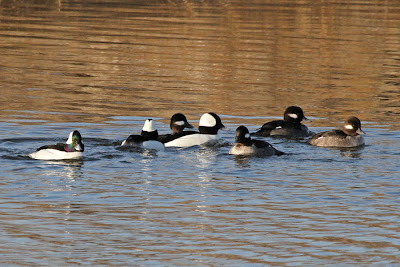 Buffleheads are common wintering birds in South Jersey, but still make a good subject for photography on a sunny day [photo by Mike Crewe]. 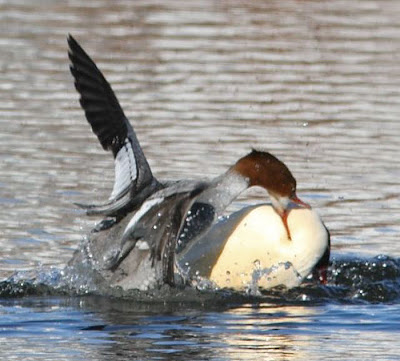 While on the subject of ducks, it looks like the Common Mergansers have been getting a bit feisty with each other on Lake Champlain recently [photo by Beth Polvino].
Posted by Mike Crewe at 1:21 PM