If there's one thing about bird identification that comes up more often than anything else on our regular Cape May walks it's this - don't rely on a single feature to identify a bird. You can, of course, pick up on a single feature to get you started - yellow legs on a shorebird, double wing bars on a warbler, streaks on a sparrow etc, but that should be your starting point, not your end game. On a recent walk, one participant was confused; we had told her that American Oystercatcher looks like it is carrying a carrot thanks to that long orange bill, then we told her the same thing for Royal Tern. If they both have this feature, she asked, then how was she to tell them apart?

If you know your birds well, this might seem like a rather odd question, as you will know that the rest of these two birds is completely different. Yet it is not a silly question, for time and again I come across people who do try to identify a bird based on a single feature and this can so often lead to disaster! In the photos below, I offer up a couple of recent examples where relying on a single feature would have resulted in a wrong identification. 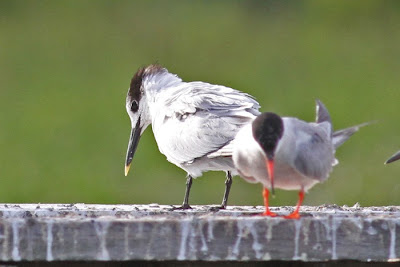 Case number 1: Sandwich Tern is our only tern with a yellow-tipped, black bill. See that feature and you know that you have a Sandwich Tern. This bird was at Bunker Pond just this past few days [photo by Mike Crewe]. 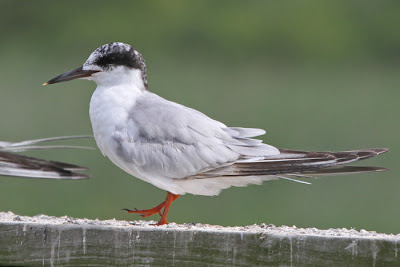 Also on the railing at Bunker Pond, another tern with a yellow-tipped, black bill. So another Sandwich Tern right? Nope, not this time... a quick check of the rest of the bird immediately reveals orange legs and a very strange head pattern for Sandwich Tern, with no sign of a crest. This is in fact a second calendar year Forster's Tern; such birds usually have all black bills, occasionally with a limited amount of orange at the base. However, birds bill are rather like our finger nails in that they continue to grow throughout their life. General wear and tear prevents the bill from becoming elongated and mishappen. The tip of the bill is often pale simply because the newly-grown section has not acquired any color pigment yet, so a pale tip to the bill is quite a ommon thing to see. Check this photo with the Sandwich Tern above and you will see differences in the size, shape and color of the amount of pale between the two birds. The moral here is - don't forget to check the whole bird [photo by Mike Crewe]. 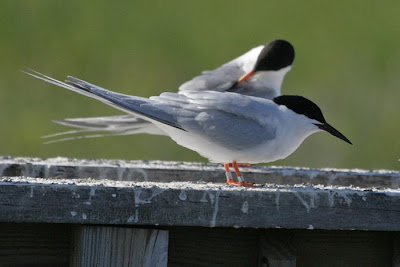 Case 2: A Roseate Tern on the railing at Bunker Pond. Easily told as a Roseate Tern by the all black bill and - remember that little trick I told you about in earlier posts? Roseate Terns have bands on both legs... [photo by Mike Crewe]. 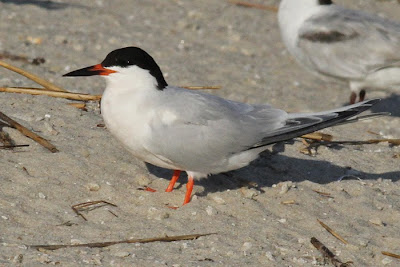 So what is this? Bright red base to the bill and no bands errrrrr, Common Tern? No, this is a Roseate Tern too! Again, you can use bill color (and even presence of bands if you like) to get you started, but always check the whole picture just in case. This is a Roseate Tern, photographed at the state park a few days ago. Roseate Terns are trapped and banded regularly as part of research projects into the species, but not every bird gets caught, so expect the odd one not to have bands. The amount of red on the bill is very variable in this species too, though I would say that this bird is pretty much at the reddest end of the range. A good guide here is the shape of the red patch on the bill. In Roseate Tern, the division between red and black forms a strong zigzag pattenr with usually much more red on the upper than on the lower mandible. In common and Forster's the division is more even [photo by Mike Crewe].

Now is a great time to be out looking at terns at Cape May. A Sandwich and up to four Roseate Terns have been hanging out at the point lately, along with a good number of Royal Terns and masses of Common and Forster's Terns. This morning came reports of two Caspian Terns joining the throng, while small numbers of Black Terns are now starting to appear too.

The first American Redstart of the fall for my office window list right now tells me it really is time to be out in the field - see you out there!!
Posted by Mike Crewe at 2:00 PM