Early August is a special time to be in South Jersey, for it's now that the Purple Martins start to wander from their breeding sites and meet up with each other at traditional gathering spots. These movements usually involve relatively short distances, as birds find each other, gather in small groups and begin to head to favored staging areas before they begin their migration in earnest. These gathering locations usually fulfil two major requirements for the birds; somewhere to feed and somewhere to sleep. Over the years, Purple Martins have settled on Mauricetown in Cumberland County as being a perfect location for them. The Maurice River provides extensive stands of Common Reed and Wild Rice for the birds to roost in, while the Delaware Bayshore provides plenty of insects to feed on.

This coming Friday, August 2nd and Saturday, August 3rd, the place to be is the Maurice River bridge on Rt 670, between Mauricetown and Rt 47/347 to enjoy the amazing spectacle of thousands of Purple Martins gathering at their evening roost. Interpreters will be there from 7PM to dusk to help you enjoy this wonder of the natural world. If you are heading for the shore on Friday, this is a great way to break that drudge of a journey!

Better still, why not join one of the great boat trips on the Bodacious, a trip that will take you along the Maurice River to get the very best of front-seat views of the Purple Martin Spectacular. For full information, click here. Treat yourself to front line enjoyment of an event that only takes place over one weekend each year - don't miss out!! 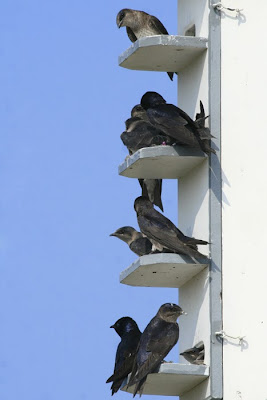 Purple Martins are fledging from boxes and gourds all over the Northeast right now and well-fed juveniles are making their first tentative flights that will take them to traditional staging areas such as the Mauricetown roost in Cumberland County [photo by Mike Crewe]. 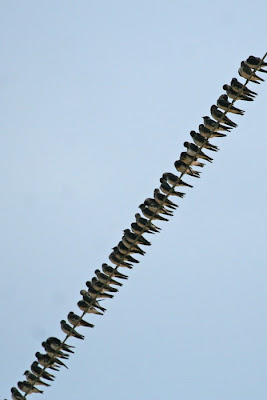 The first indication you might get of martins starting to gather is when they begin to line up on utility wires on the edge of town. Though these lines of birds can be eyecatching, they are nothing when compared to the swirling spectacle of tens of thousands of birds preparing to bed down for the night in the reed beds on the Maurice River [photo by Mike Crewe].

Recent Sightings
Occasional sightings of single Roseate Terns continue to come from the Cape May Point beaches from time to time and a Black Tern was present there on 28th; July 31st also saw two Gull-billed Terns dropping in to Bunker Pond at the state park for a short while in the morning. The Meadows continues to hold good shorebird numbers, though water levels are getting very low and the rain currently falling outside the window will be a welcome top up! On July 27th, at least five Stilt Sandpipers were present at The Meadows. Small numbers of Little Blue and Green Herons, Glossy Ibises and Black-crowned Night Herons are arriving at the point and at least five Solitary Sandpipers passed over our Wednesday walk at the state park this week. July 22nd produced a count of 250+ Whimbrel at Stone Harbor Point and shorebird numbers at Brigantine continue to increase, with the odd White-rumped Sandpiper, Long-billed Dowitcher and Marbled Godwit being reported from there.

With just two weeks to go until our 2013 Morning Flight count starts, Sam Galick tells me that warblers are already on the move; Yellow Warblers are present at many locations around Cape May Point now and Sam noted 53 flying past Higbee Dike on the morning of July 30th. A few American Redstarts and both Northern and Louisiana Waterthrush have been noted from the dike too. 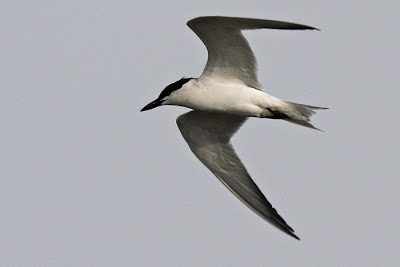 Gull-billed Tern at Bunker Pond on July 31st. Now is a good time to be checking tern flocks for something a little different. Gull-billed Terns are rather different to most tern species in that they favor small frogs and dragonflies as food rather than fish. Look for them patrolling the edges of lakes, especially those with lilypads on, as they swoop to take food off vegetation or from the air rather than plunge-diving for fish [photo by Mike Crewe].
Posted by Mike Crewe at 2:48 PM