Terns in the news

Seems like everyone has been tern watching this weekend, as numbers of several species of these birds have been steadily increasing this past few days. Up to two Roseate Terns and 10 or so Royal Terns have been hiding among the tern gatherings on the beach at Cape May Point State Park, where up to at least 1600 Common Terns have been estimated recently. The Roseates remain elusive but are best looked for either on the beach near the bunker, or on the railing on the south side of Bunker Pond. Gatherings of birds at Stone Harbor Point are also providing good birdwatching opportunities now, with flocks of Whimbrel stopping by, while Tom Magarian reported five Roseate Terns and around 400 Royal Terns there this evening. Adult Sanderlings - some still in full breeding dress with rich, rusty faces - are flocking to tidal beaches now and the first Parasitic Jaeger of the season was reported from the rips on 3rd. 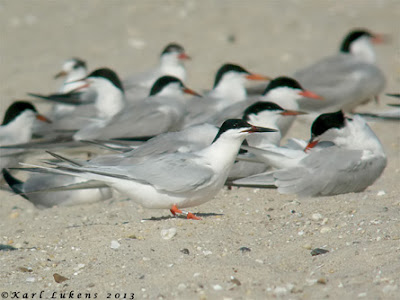 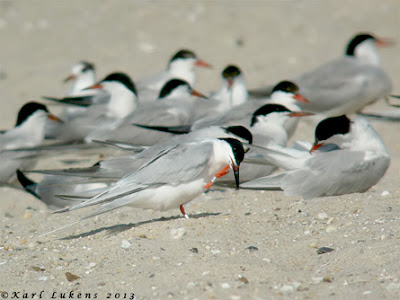 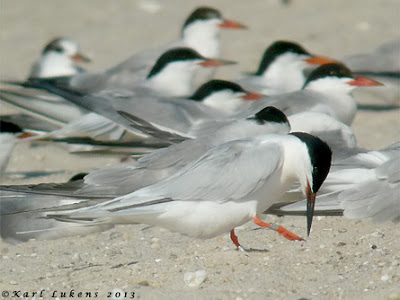 Karl Lukens sent me these shots of one of the Roseate Terns on the South Cape May Beach at the state park today. Roseates can lose themselves surprisingly well in a large flock of Common and Forster's Terns, but look carefully for a long, fine-pointed and mostly black bill, overall pale appearance and a diagnostic pale stripe along the top of the fold wing, produced by a white trailing edge to the flight feathers. Oh, and if all else fails, Roseates are being well-studied and you can usually reckon on any Roseate Tern that you find having bands on both legs - a great ID feature!!
Posted by Mike Crewe at 12:51 AM