Warblers up the stakes

A few cooler mornings, a layer of dew on the grass and it can only mean one thing - it's time for the warblers to drop in at Cape May. The past few days has seen a nice array of fall warblers passing through the point and, though numbers are still low, variety is certainly there. Last Thursday the first fall Northern Waterthrush for my garden was tail-wagging its way along a tree branch and my office window provided me with a rather mottly-looking, molting adult Tennessee Warbler. One or two American Redstarts are pirouetting around the ivy clumps and Black-and-white Warblers are peering up and down the tree trunks. Our recent walks have certainly been getting a flavor of fall about them too; Friday's Higbee Beach walk was highlighted by finds of both Chestnut-sided and Mourning Warblers, while the evening Meadows walk produced a Black Tern, plus three Common Nighthawks feeding at sundown. Perhaps the same three were seen feeding over the area again the following night and enjoyed by those who stopped in to look at the Wilson's Phalarope that was there on the evening of 24th. The same or another Wilson's Phalarope was at Higbee Dike this morning (25th), while other treats at The Meadows have included intermittent sightings of a Great Horned Owl and up to 300 or so Black Skimmers. The CMBO walk at The Beanery was full of goodies on 24th, including Black-billed Cuckoo, Least and Great Crested Flycatchers, two Bald Eagles and an extravaganza of Ruby-throated Hummingbirds. Sunday's walk at Cox Hall Creek WMA added to the warbler show with Northern Parula and Nashville Warbler among the mix of species.

Merlins and a few Peregrines continue to infiltrate the area (two Peregrines were on the water tower at the coast guard unit on 22nd) and an early Philadelphia Vireo was at Higbee Beach on 24th. A Cattle Egret was munching grashoppers at Bunker Pond on 24th and, a little further afield, Black-necked Stilt and Marbled Godwit were at Heislerville on 23rd and a Lesser Scaup was a surprise find at Brigantine on 22nd. 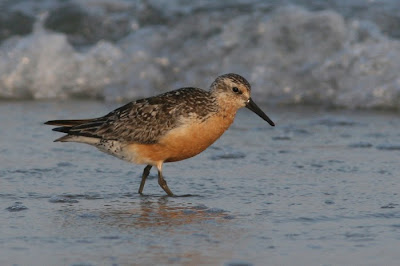 A few Red Knot are drifting through our area now and are well worth keeping an eye out for this month as they are likely to be adults, still sporting their cinnamon underparts [photo by Jesse Amesbury] 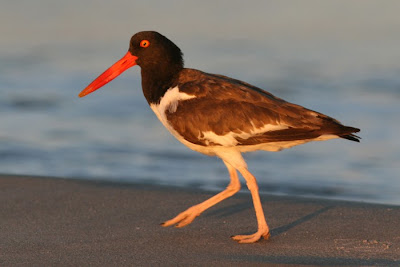 American Oystercatchers always make for interesting photographic subjects; this picture reminded just how high a percentage of oystercatchers that have black marks on the yellow iris of the eye - and I have no idea why... [photo by Jesse Amesbury] 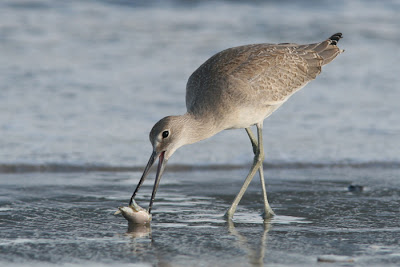 If you still have the impression of Eastern Willets carved on your mind after a summer on the bayshore, take a look out on the beaches now and you may notice a difference. Most of our local breeding population of Eastern Willets has already headed south and is already being replaced by Western Willets. These western birds are longer legged, longer and narrower billed and overall more graceful-looking than our local birds [photo by Jesse Amesbury]. 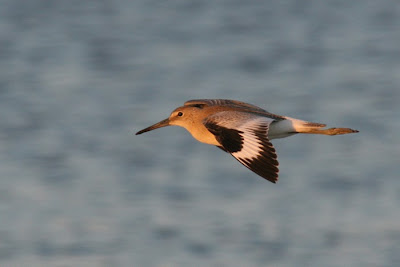 It always pays to be cautious when identifying Willets to subspecies as there are so many potential pitfalls. This bird was photographed toward sunset, giving it a warm, amber glow which needs to be taken into account when comparing shots. The bill on this bird looks a little shorter and stouter than the bird above, but this still apears to be a juvenile Western Willet and perhaps the bill hasn't quite finished growing yet [photo by Jesse Amesbury]. 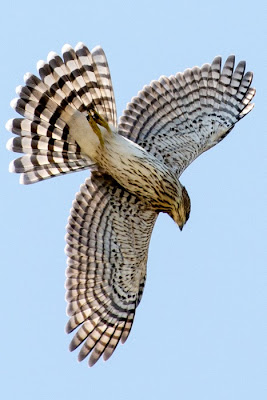 And as if we could forget that autumn in Cape May is all about the hawks too! This juvenile Cooper's Hawk took a tight turn right over the Hawkwatch Platform and was clearly wondering where you all are - another two weeks folks! [Photo by Ed Russell]
Posted by Mike Crewe at 10:21 PM