Good birding continues to get better at Cape May, as is so often the way in mid-August. Our walk at the state park this morning revealed two Northern Shovelers and two Blue-winged Teal fresh in on Bunker Pond, while two Caspian Terns kept us entertained - especially the youngster that played with a stick! Numbers of passage shorebirds continue to increase and, with water levels finally dropping now at the state park, we should hopefully get a few more things dropping in and staying for a while. A White-rumped Sandpiper was at The Meadows on 16th and Wilson's Phalarope and American Golden Plover continue at Brigantine. The first Sharp-shinned Hawks and Merlins have been noted in both Atlantic and Cape May counties over the past few days and herons and egrets are certainly on the move, with several reports of American Bitterns from a range of sites recently.

Songbird passage continues to pick up, with Eastern Kingbirds building up in number at Higbee Beach WMA and a few early Bobolinks starting to bound over the point. Warblers will only continue to increase - both in number and in variety - over the next few weeks; Michael O'Brien reported a fly-over Cape May Warbler on Stevens Street on 20th, while Sam Galick's posts on our Seasonal Research blog will keep you up to date on the great variety of warblers that are passing Higbee Dike (as well as keeping you up to date on Atlantic City Airport flight schedules and the latest puppy news it would appear!!!). 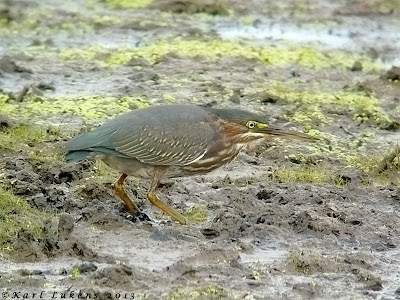 A sign of the advancing season is when the youngsters start to turn up. Green Herons have seemed to have had a great year in South Jersey this year, judging from the number of birds I have been seeing this summer. This juvenile, with its streaky neck and speckled wing coverts may well have come from a nest somewhere locally and was one of many highlights on our Meadows walk last Friday evening [photo by Karl Lukens] 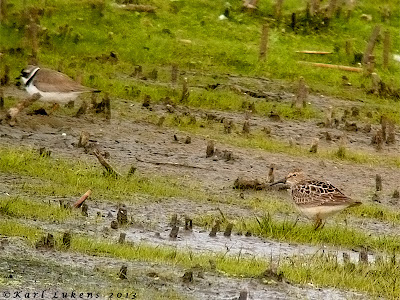 Locally, shorebird variety has been best at The Meadows so far this season - here a Semipalmated Plover shares space and time with a Pectoral Sandpiper [photo by Karl Lukens]. 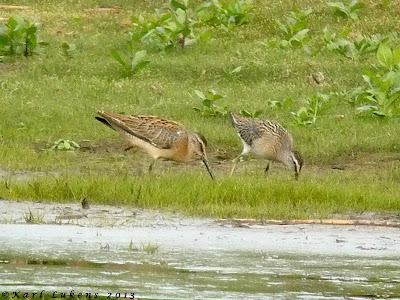 A sign of things to come - the first juvenile shorebirds from the Arctic are starting to pass our way now - here a couple of young Short-billed Dowitchers get their first taste of Cape May fare at The Meadows [photo by Karl Lukens]. 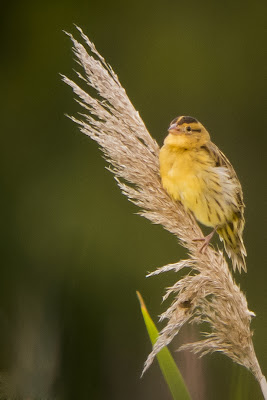 Thousands of Bobolinks pass through Cape May every fall, but so many of them are just little blips flying high overhead. This individual chose to pose for our group at The Meadows on Monday and was much appreciated by all [photo by Hugh Simmons].
Posted by Mike Crewe at 5:09 PM