Morning Flight kicks off in style

Our Swarovski Optik-sponsored 2013 Morning Flight project at Higbee Dike doesn't officially start until August 15th, but that doesn't mean that the birds will wait until then! This year, Sam Galick returns to count for us again, which is great news since Sam is already getting out there and noticing some early migrants passing through.

Perhaps most surprising so far was the count of 53 Yellow Warblers on the morning of July 30th, while there has been an interesting movement of Northern Waterthrushes going through already - typically I would expect such early-season birds to be Louisianas, but there has been the odd triple-figure count of Northerns by mid-August in some years, so this is not overly unexpected. Shorebird numbers have not been high yet, but there is certainly good diversity, with the likes of Whimbrel and Black-bellied Plover - even a Red Knot - joining larger numbers of Semipalmated and Least Sandpipers.

And under the heading of 'if you don't go out you won't see anything', Sam's presence proved worthwhile with the discovery of a juvenile Bonaparte's Gull on August 6th at the ferry terminal - a sighting even six weeks later than this would be considered early!

In previous posts, I have mentioned how digital photography is offering us new identification tools for dragonflies, simply by allowing us to photograph distant shapes and zoom in to see the detail; this practice is certainly paying dividends with birds too, and perhaps nowhere more so than at Higbee Dike, where fast-moving blips in the sky are being turned into identifiable photos of birds, even of species where very few flight shots taken naturally in the wild currently exist. Here's a few of the photos that Sam has sent me from this season so far. 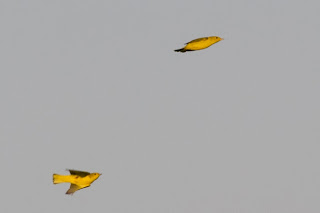 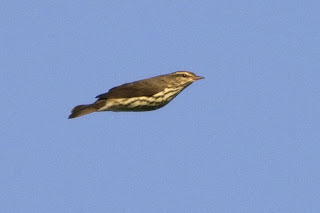 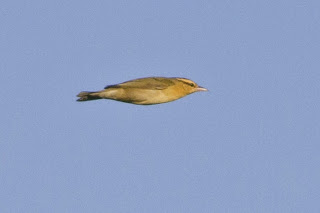 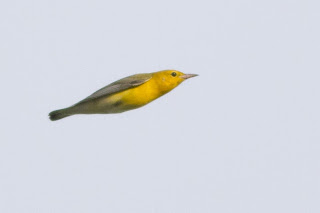 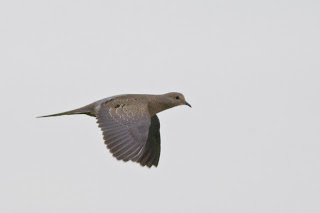 Test yourselves on the photos and see how you do! From top to bottom they are Yellow Warblers, Northern Waterthrush, Worm-eating Warbler, Prothonotary Warbler and Mourning Dove. A high ISO rating, coupled with the need to hand hold the camera and pan makes for grainier images than one would like, but I think that the results are remarkable. Look at the diagnostic yellow undertail of the Yellows, the Waterthrush's supercilium shape, the Worm-eating's overall plain appearance with dark eyeline and the Prothonotary's large bill - all good ID features. The Mourning Dove I like as it shows nicely the pale feather tips that produce a scaly pattern to juveniles at this time of year [photos by Sam Galick].

Recent Sightings
At least one Sandwich Tern has been reported from the tern flocks at Cape May Point, being first noted on 5th and still present this morning. Up to four Roseate Terns are currently being seen at the point, while Stone Harbor Point has been holding at least four Sandwich and two Roseate Terns lately. An American Avocet was seen briefly at Bunker Pond at 6AM on 5th, before heading off to Delaware; the ponds at the state park are too deep to attract shorebirds now, but it is still worth checking out The Nature Conservancy's South Cape May Meadows on Sunset Boulevard for some good shorebirding. There's even some good birding to be had out on the barrier islands; this past two days I have been surveying beaches out there (and boy, are they devoid of anything natural!!) and have enjoyed Yellow Warblers migrating past the ferris wheels, Brown Pelicans and Whimbrel moving offshore and watched the shaky first flights of a fledgling Peregrine...

Once our Morning Flight Project begins officially, we shall be posting counts regularly on our Seasonal Research blog, which will also carry data from the Hawkwatch and Seawatch projects. This year we are grateful to Swarovski Optik for sponsoring all three of these important research programs.
Posted by Mike Crewe at 2:10 PM