WATERFOWL THROUGH RAPTORS
It seems that most of the remaining Brant have vacated the Cape-- only 12 were seen during an aerial survey of Atlantic coast marshes between Wildwood and Ocean City 23 May (NJDFW). A male Common Eider surprised observers at CMP 23 May (BB, m. ob.). All three scoter species continued to linger around CMP through the week; a few hundred Black Scoters were still present in Delaware Bay between CMP and Reed's Beach (m. ob.). A White-winged Scoter was noted at Avalon 20 May (GDw). Red-throated Loons finally moved out this week, with an apparent last date of 19 May (m. ob.). The Red-necked Grebe remained at Champlain Drive in Villas through 23 May (BP). As is often the case, Brown Pelican has been rather scarce this month. A single was seen from CMP 23 May (AC). At least 6 Mississippi Kites could be found over CMP and West Cape May 17 May, with at least 10 seen 18 May (m. ob.). Sightings of at least one individual continued through the week. Swallow-tailed Kites also made an appearance this week, when two individuals passed through Cape Island during the afternoon hours 17 May (fide RM). At least 50 Broad-winged Hawks circled over CMP during northwest winds 18 May (m. ob.). 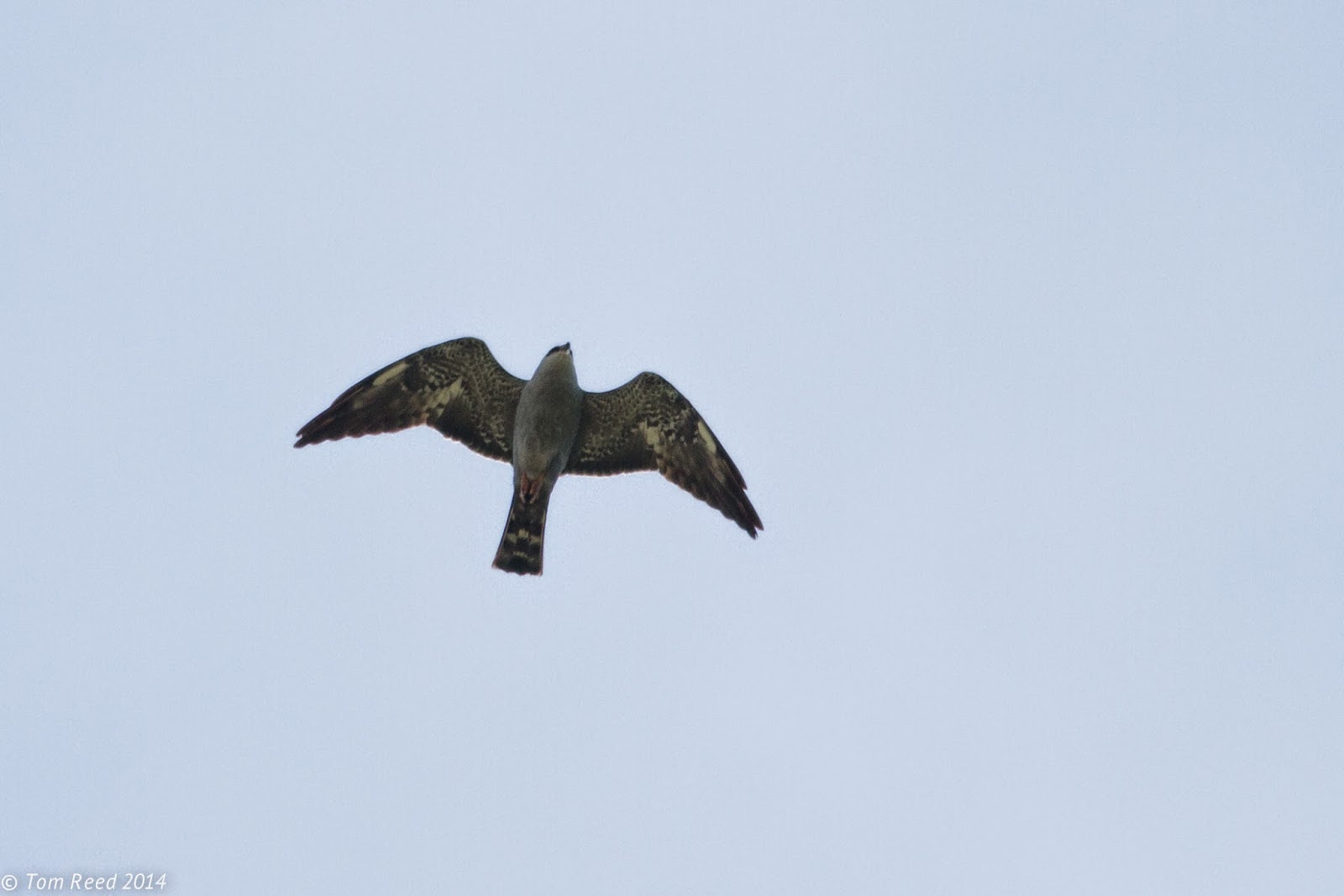 [Mississippi Kite over Rea Farm/Beanery, 20 May. Photo by Tom Reed.]

SHOREBIRDS THROUGH SKIMMER
Rare in spring, a male Wilson's Phalarope performed nicely at SCMM 20 May (TR, VE, m. ob.). A Stilt Sandpiper was also present there 19–21 May (m. ob.). White-rumped Sandpiper became a daily sight at SCMM through the week, with a max of 4 birds on 22 May (TB). A group of 5 appeared at High's Beach 23 May (WK). A couple lingering Wilson's Snipe were noted at West Cape May 17 May (RH, KH). Parasitic Jaeger became a bit less reliable this week, but was seen from CMP on several dates (m. ob.). Exceptional in spring, a Long-tailed Jaeger was carefully studied as it traveled north and west past CMP 18 May (VE). A Roseate Tern put in a brief appearance at Bunker Pond, CMPSP 19 May (MO'B, LZ, m. ob.). A Black Tern entertained observers at CMP 20 May (MP, m. ob.), and at least two Lesser Black-backed Gulls remained on the CMP beachfront through the week (m. ob.). Numbers of Common Terns and Black Skimmers slowly increased, with 100 Commons and 40 Skimmers seen in the Hereford Inlet area 23 May (NJDFW).

[Wilson's Phalarope at SCMM, 20 May. Photo by Michael O'Brien.]

DOVE THROUGH SPARROW
A Eurasian Collared-Dove, perhaps the same individual as previously noted, was seen along Seagrove Avenue, CMP 20 May (RC). At least three Black-billed Cuckoos could be found at CMPSP 19 May (m. ob.). A Pileated Woodpecker was briefly heard calling near Green Creek 20 May (SG). Another uncommon spring migrant, a Yellow-bellied Flycatcher was noted at West Cape May 23 May (MG et al.). Willow Flycatchers returned to known breeding areas, such as CMPSP and Corson's Inlet State Park this week (m. ob.). CMP's Black-capped Chickadee was last noted 17 May (m. ob.). A backyard in Avalon hosted a Gray-cheeked Thrush and a Canada Warbler 21 May (GDw). There have not been many reports of Kentucky Warbler this spring-- one was heard just north of "the bridge" at Belleplain 17 May (TJ). Notable migrant warblers included a Mourning Warbler near Green Creek 22 May (SG), 2 Bay-breasted Warblers at Belleplain 21 May (MO'B, LZ), Tennessee Warbler at Belleplain 18 May (MO'B, LZ), and multiple reports of Wilson's Warblers at Cape Island 19–22 May (m. ob.). Late Savannah Sparrows were noted at Belleplain 20 May (m. ob.) and at SCMM through at least 22 May (m. ob.). 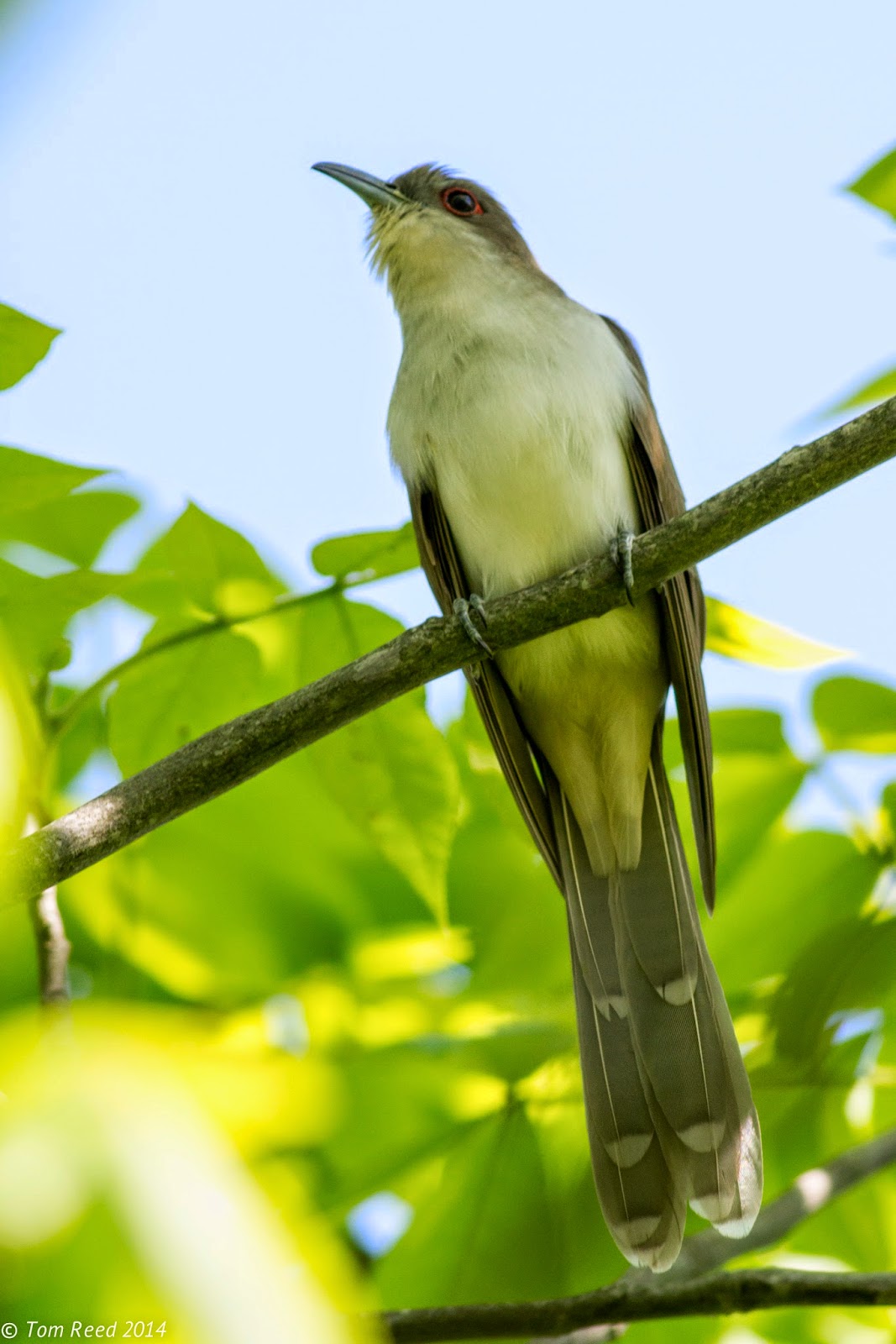 [Black-billed Cuckoo at CMPSP, 19 May. Photo by Tom Reed.]