Weather: The period opened with mild conditions, featuring mostly sunny skies and west/northwest winds 26–27 Apr. Clouds increased through the day 28 Apr, ahead of a large and complex storm system that affected the area 29–30 Apr. This storm brought periods of heavy rainfall and gusty east winds that occasionally surpassed 30mph. The raw conditions gradually weakened through the overnight hours 30 Apr–1 May, as winds shifted to the south and dense fog formed over many areas. Skies gradually cleared through the rest of 1 May, and more substantial sunshine and mild temperatures returned to close out the period 2 May.

WATERFOWL THROUGH IBISES
A small collection of dabbling ducks remained at Cape Island through much of the period, highlighted by a male Eurasian Wigeon that lingered with 7 American Wigeon at CMPSP/SCMM through at least 1 May (m. ob.). A pair of Northern Shovelers could still be found at SCMM as of 30 Apr (m. ob.), and multiple pairs of Gadwall might be setting up shop at SCMM. Small numbers of Green-winged Teal remained at CMPSP, SCMM, and at several locations along the Delaware Bayshore through the period (m. ob.). In the diving duck department, decent numbers of Black and Surf Scoters were still migrating past CMP most days (m. ob.), along with the occasional Red-breasted Merganser and Long-tailed Duck. A flock of 8 White-winged Scoters there 2 May was a bit late for so many (VE). Three Hooded Mergansers were also tardy at SCMM 1 May (VE, TR). Wild Turkeys continued to occupy CMP, where they are generally rare, with at least 2-3 individuals present through 2 May (m. ob.). Red-necked Grebes haven't completely left yet-- 2 were at Champlain Drive, Villas 27 Apr (BP) with a single remaining 1 May (SG), while another was still in the back-bays near Wildwood 2 May (VE, BL et al.). A low-density spring migrant, an American Bittern was reported at SCMM on several occasions, most recently 2 May (m. ob.). Several Cattle Egrets continued to be seen along Route 9 in Swainton (m. ob.), while another was near the intersection of Goshen Road & Goshen-Swainton Road 30 Apr (TR). A large flock of Glossy Ibis, peaking at approximately 400 birds, took up residence at Dias Creek 27–30 Apr (m. ob.). An adult White-faced Ibis was a member of this flock 30 Apr (TR et al.). 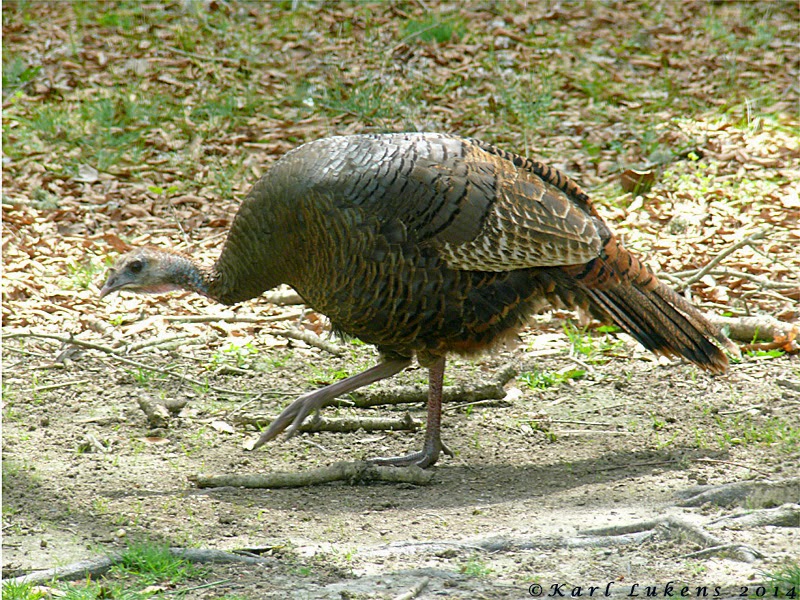 RAPTORS THROUGH TERNS
Northwest winds on 26 Apr produced a movement of at least 9 Bald Eagles over CMP (TR et al.). A short-lived hawk flight on 28 Apr included 12 Red-tailed Hawks, two of which crossed the bay toward Delaware (CS). At least 3 Northern Harriers and 7 Merlins were on the move over Cape Island 2 May (m. ob.). Shorebirds migrated past CMP throughout the week, with small numbers of Willets, Least Sandpipers, Short-billed Dowitchers, Semipalmated Plovers, and yellowlegs seen most days (m. ob.). A flock of 210 Whimbrel were in the marshes along Avalon Boulevard 30 Apr (TR), and another 125 were near Jarvis Sound 2 May (VE, BL et al.). An adult Little Gull flew north past Avalon with 20 Bonaparte's Gulls during the height of the coastal storm 30 Apr (TR). Lesser Black-backed Gulls were again regular at CMP and Stone Harbor Point throughout the period (m. ob.). The Glaucous Gull continued at SCMM until 28 Apr, when it was found dead (m. ob.). Least Tern arrived on a typical date of 1 May, when 2 were encountered at CMPSP (TR).  Caspian Tern is a scarce spring migrant, therefore one flying north past CMP 26 Apr was notable (DL, GD, TR). A Gull-billed Tern, uncommon at CMP, flew over Yale Avenue 28 Apr (GD). The year's first Black Skimmer was photographed at Cape May City 30 Apr (MP), and Royal Terns were noted at CMP and Avalon 2 May (m. ob.). 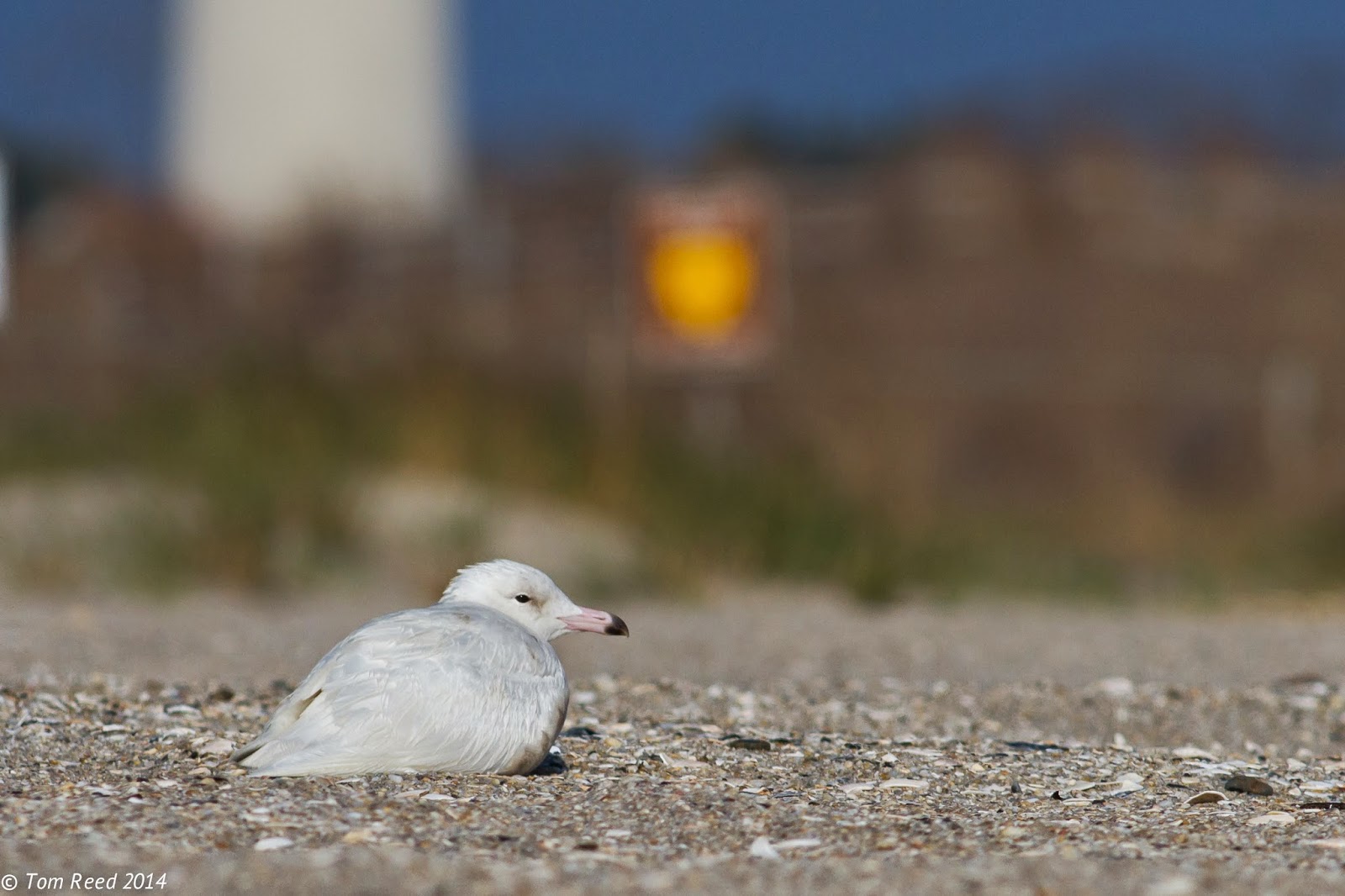 CUCKOO THROUGH BUNTINGS
The first Yellow-billed Cuckoo made its presence known at Higbee Beach 2 May (m. ob.). Chuck-will's-widows and Whip-poor-wills were finally reported with some regularity throughout the peninsula, and Ruby-throated Hummingbirds also filtered in to various locations, with many arriving 2 May (CS, pers. comm.). Red-headed Woodpeckers were noted at several locations 2 May, including 5 that migrated north over CMP (GD et al.). A Pileated Woodpecker was a surprise at Higbee Beach 1 May (TB). The bird was flying north, low over Field #1, and may still be in the area. A Cave Swallow was described at Lily Lake, CMP 29 Apr (VN), and CMP's Black-capped Chickadee continued its stay, last noted 2 May (GD). The foggy conditions of 1 May produced a noticeable fallout of songbird migrants at Cape Island, particularly at CMP. Included in this concentration were 400+ Yellow-rumped Warblers, 300+ White-throated Sparrows, 40+ Indigo Buntings, 20+ Orchard Orioles, 15+ Ruby-crowned Kinglets, 10+ Blue-headed Vireos, 10+ Northern Waterthrushes, 2 Blue-winged Warblers, a Yellow-throated Vireo, and a Hooded Warbler (TR, VE, MC et al.). Other locally notable migrants included 2 Summer Tanagers at CMP 1 May (RC), a Least Flycatcher at Hidden Valley 2 May (TR), and a Grasshopper Sparrow at Higbee Beach 2 May (MP, m. ob.). The spring's first Bobolinks appeared out of the fog at CMPSP 1 May (TR). Breeding bird arrivals included Acadian Flycatcher at Belleplain 26 Apr (PB, m. ob.), American Redstart at Belleplain and Peaslee WMA 28 Apr (m. ob.), and Yellow-breasted Chat at Higbee Beach 1 May (VE). Lastly, a male Painted Bunting visited feeders at 627 Seagrove Avenue, CMP on 26–27 Apr (KL, m. ob.). 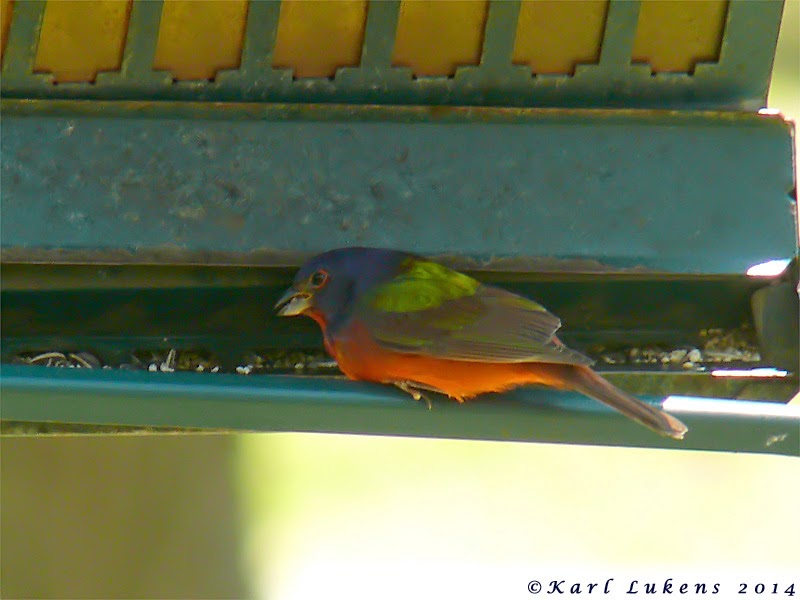