The World Series of Birding truly is an extraordinary event, offering a wonderful mix of excitement, competition, stress, camaraderie, fund raising and sheer madness! CMBO's Century Run Team (and we would be the first to admit that we do 'World Series Lite'!) certainly had a fun day, notching up 139 species. Not a bad total you might think, yet it was well down on what the big boys got...

New Jersey is one of the smallest states in the union and yet the sheer variety of birds here during migration periods is truly remarkable and the World Series of Birding certainly highlights that fact. Our hats go off to the overall winners, the Cornell Redheads, sponsored by Cornell, who notched up an impressive 218 species on a route that took in the whole state. Closer to home, CMBO's Century Run total was well beaten by Swarovski SPNI Champions of the Flyway - a team made up of local tour de force Tom Reed and a group of very savvy birders from Israel. These guys managed an awesome 178 in Cape May County alone - the same area that we were restricted to. But, while big lists equal more money for conservation, it is fair to say that most people take part for the fun of it and - for me at least - one of the real highlights of the event is not the day itself, but the trials and tribulations that are shared at the brunch the next day.

Tales of missed opportunities, birds that didn't show and all manner of minor knocks and scrapes are fun to share, but an added element (and increasingly so these days) is the stream of stories that trot out from the youth teams. There can be no doubt that encouraging the next generation to get outside and enjoy birds is a healthy step in the right direction and sponsorship and support for youth teams from the likes of Carl Zeiss Optics, Cornell Lab, Cape May-Lewes Ferry and a number of youth centers and bird clubs is leading the way.

Overall, 255 species of birds were notched up collectively in the state of New Jersey on May 10th - a remarkable total and one which is only a handful of species short of what it has taken me all year to reach so far! Looking down the cumulative list for all teams is always interesting and - perhaps not surprisingly - the most obvious thing that stands out this year is the unusually high number of species normally considered to be winter visitors here. Such species are usually missed on World Series day or, at very best, are only seen by a handful of teams, but it is telling that this year all the loons and grebes were easily seen by most teams, all of the waterfowl but three were notched up and all of the sparrows bar one fell to sharp eyes on the day. In addition, a look at the species that were added as 'write-ins' to the list shows that this year's batch - Red-necked Grebe, Tundra Swan, Rusty Blackbird and Common Eider - would all normally be considered winter visitors. And after the prolonged winter and cold spring that we experienced in the eastern USA this year, it's not surprising that such species were readily found - it's only a shame, perhaps, that someone couldn't pull out a Snowy Owl; now that would have been a top find in May!

Although World Series Day indicates that spring is well and truly pushing us headlong into summer, it is certainly not the case that spring migration is over. Damp and dreary weather today may have slowed down the migration train, but Mark Garland still pulled the 'big one' out of the hat today by finding a Scissor-tailed Flycatcher on the South Cape May Beach and we still have the full exuberance of the horseshoe crab season to come. Events throughout this month form part of our Cape Maygration season and there will be many more days of exciting birding down here in South Jersey over the coming weeks. As a tempter to get you here to enjoy the fun (as if you haven't already booked!) here's a few pictures from World Series day and from a few days either side - the birds are here, it's time to start enjoying them! 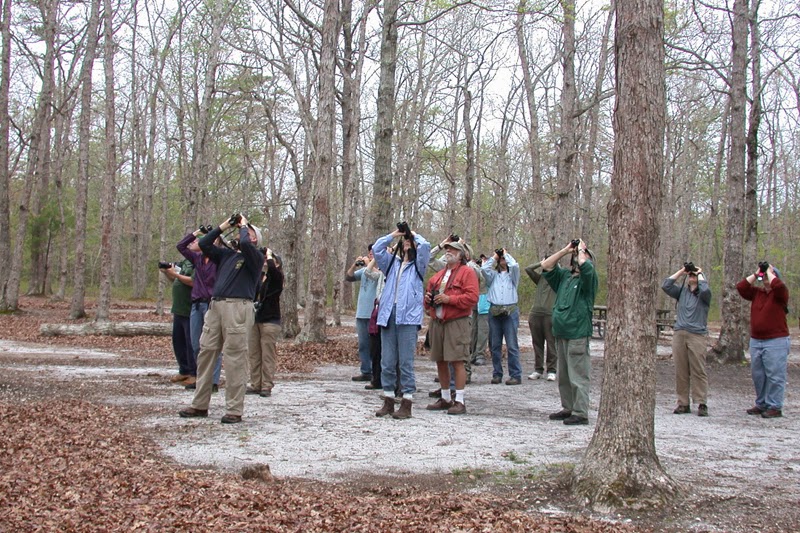 Just to show we were all pulling our weight, here's our Century Run team seeking out Summer Tanager in Belleplain State Forest - a great team effort guys!! [Photo by Mike Crewe] 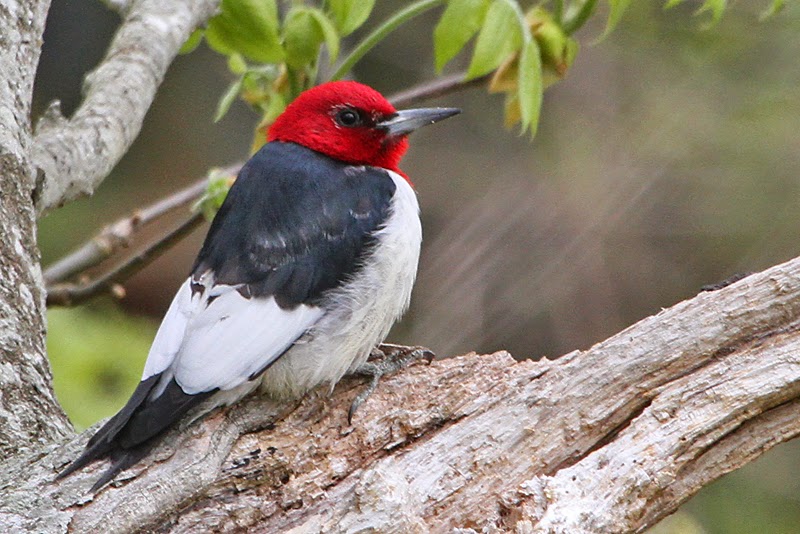 Having moved offices recently (I always work on the premise that a moving target is harder to hit!) I find myself starting a new 'office window list'. Though I can't now see the busy Northwood Center feeders, I do have a more commanding view of the property and this Red-headed Woodpecker was a welcome addition to the ever-growing list (currently on 97 folks!) [photo by Mike Crewe]. 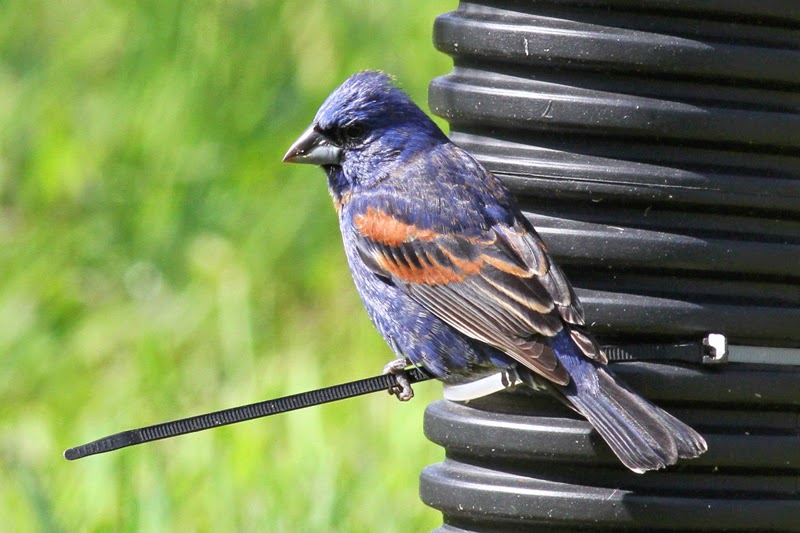 Cape May has increasingly less open space as abandoned farmland continues to disappear unchecked under new housing (funny, I thought we already had a water shortage in Cape May!!) and birds such as Blue Grosbeak are becoming ever more localized in our area. However, CMBO's walk participants have been enjoying some fabulous views of this gorgeous bird lately [photo by Mike Crewe]. 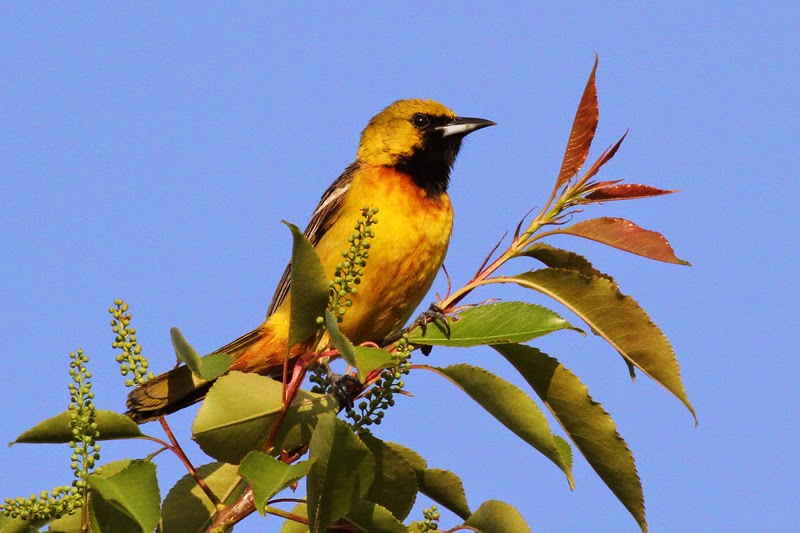 Now and again you find a bird that doesn't immediately jump out at you from the pages of your field guide and, more often than not, this can be down to constraints of space in the book. Singing birds tend to catch the attention more easily and a peculiar bird at this time of year may well be a first-year male from one of a number of species where such individuals don't acquire their full breeding plumage. This odd looking bird is a first-summer male Orchard Oriole, one of several that can currently be seen well at degraded or only semi-natural habitats such as Cape May Point State Park and Higbee Beach [photo by Mike Crewe]. 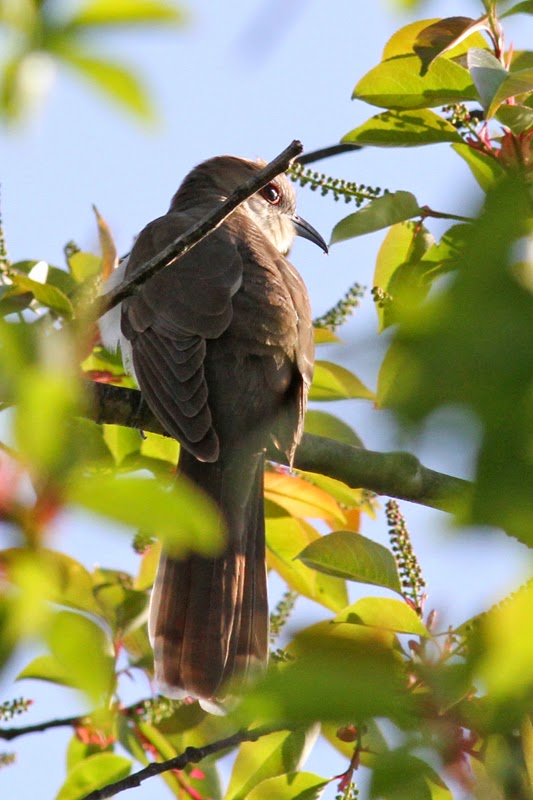 On any day in May it is worth being out in the field as things are changing almost by the hour. After feeling we had cleaned up pretty well in Cape May County on World Series day, less than an hour at Higbee Beach first thing the next morning provided us with no less than 10 species that we had not found the day before - including this Black-billed Cuckoo [photo by Mike Crewe]. 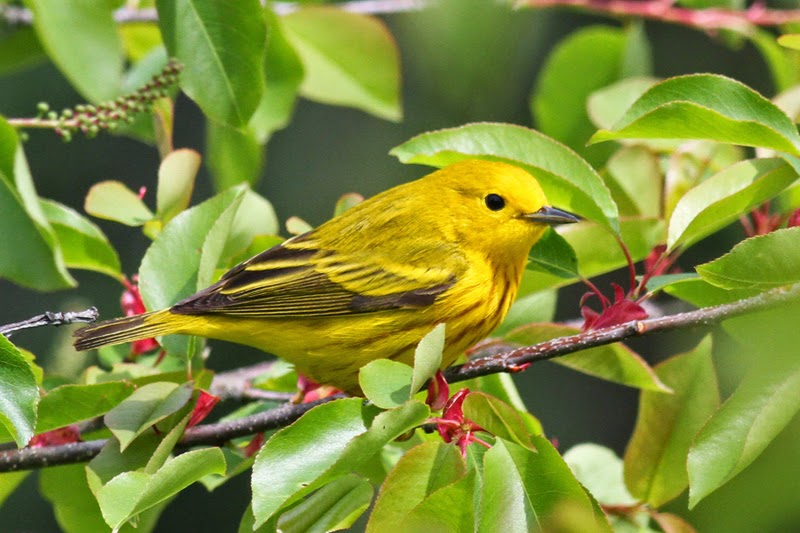 Meanwhile, back at the office window! Male Yellow Warblers certainly live up to their name at this time of year and good numbers can currently be enjoyed around Cape May [photo by Mike Crewe]. 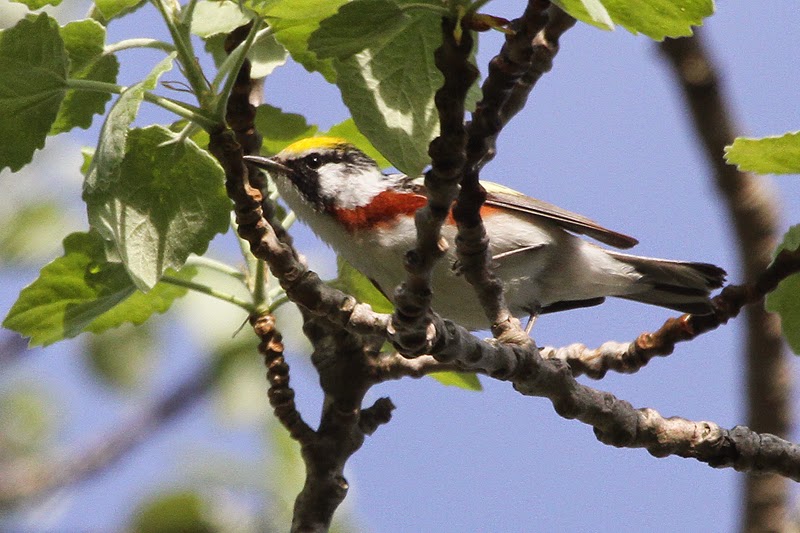 It's not over until it's over... the warbler festival will continue for a while yet, with birds such as this Chestnut-sided Warbler appearing over the last couple of days around Cape May Point [photo by Mike Crewe]. 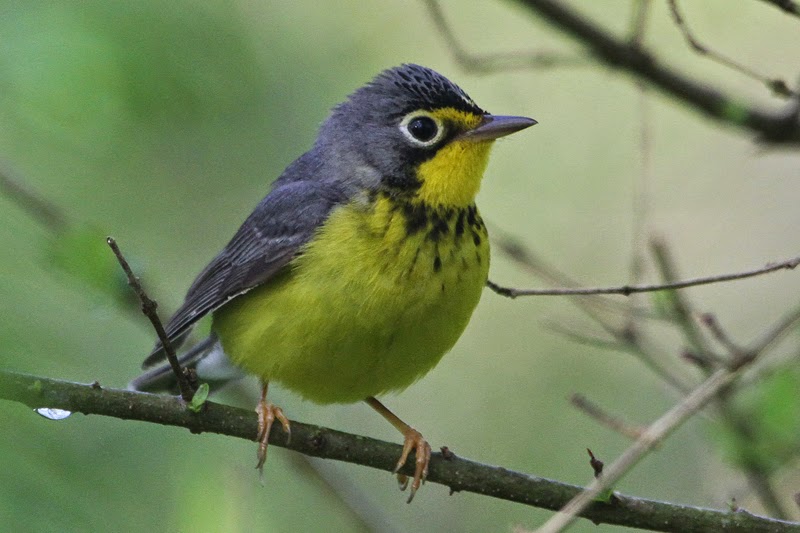 Patience really can be a virtue... Canada Warbler is up there in the top five for me when it comes to American wood-warblers, but I've never been able to manage a decent shot of this species, which spends a lot of time skulking in thick cover. Luck came my way at Higbee Beach on Sunday morning, however, when this bird posed beautifully in a quiet corner for me. Note - no bird call app, no feeder, no water drip - just field craft :-) [photo by Mike Crewe]. 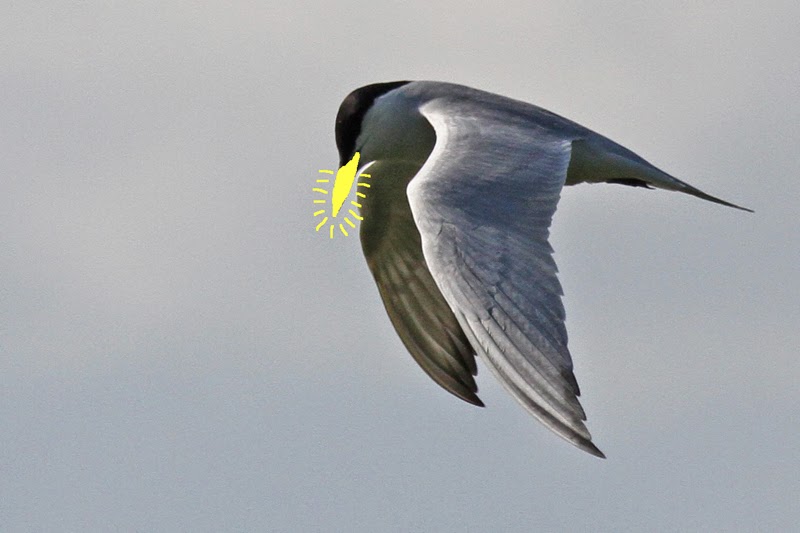 And finally (as the media often say).... The World Series of Birding often attracts great newspaper and radio coverage - for which we are eternally grateful as it certainly helps to get the message out there. But just occasionally the message gets a little distorted on the way. The Philadelphia Inquirer gave us great coverage this weekend, but caused me great angst when they published that we saw a Gold-billed Tern! Since it would be a first for New Jersey, I will no doubt have to write a description to get this bird onto our list, so I thought I would share a photo of our bird. Hmmm, maybe we should hold the event on April 1st in future!!!! [Photo by Mike Crewe, courtesy of Photoshop]