[American Robin with Black Cherry, Del Haven over the weekend. The native cherry is universally acclaimed as one of, if not the best wildlife plants. Click to enlarge photos.]

Something happened with my big black cherry on July 1, roughly - apparently, all the cherries ripened more or less on the same day, and the onslaught of birds, from American Robins to even hover-gleaning Laughing Gulls, has been constant. Find a cherry, or a fruiting mulberry, in mid-summer, and you will find the local breeders - including fancy ones like tanagers and orioles. Grow one, and you'll attract them to your yard, and you might not even need to plant one, since the birds are apt to "pass" a seed in your yard. My weeding rule of thumb is not to pull it until I'm sure I don't want it, and the cherries are one reason why. I should warn you, though - expect a mess, on your deck, car, or anything else under a cherry in summer.

[Juvenile plumage in Northern Mockingbirds is short-lived - they lose the breast spots quickly.]

[Gray Catbird inspects his options. The catbirds and American Robins often hover-glean cherries, i.e. hovering in front of a laden branch and snatching their choice.] 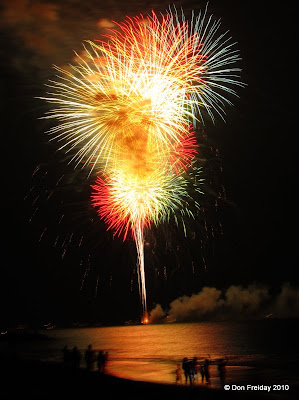 [Cape May Ferry Terminal, North Cape May last night.]
Posted by Don Freiday at 7:25 AM