Of Shorebirds, Harriers and Other Winged Things 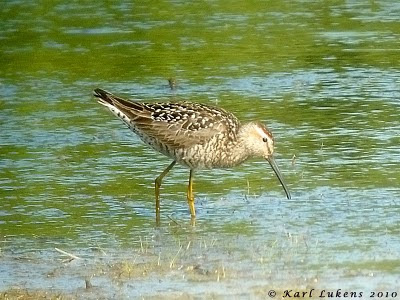 [Stilt Sandpiper seen during this morning's 'Bird Walk For All People' at
Cape May Pt. State Park. Photo by Karl Lukens.]

Results from this morning's walk at the State Park are up on the Field Trip Reports page. I spent the morning on the bayshore marshes of northern Cumberland County, searching for evidence of breeding Northern Harriers as part of an ongoing survey.

The marshes along Seabreeze Road (click for map) hosted a growing number of shorebirds, including small groups of Greater Yellowlegs, Short-billed Dowitchers and Least Sandpipers. A single Least Bittern called once, and there were at least 5 Willow Flycatchers singing from vegetated islands in the marsh. The frequent sound of "bink" rained down from above, as several flocks of Bobolinks passed over. There was also a substantial northward movement of dragonflies, dominated by hundreds of Swamp Darners (our largest dragonfly), but also including small numbers of Wandering Gliders and Black Saddlebags. Subsequent stops at Husted Landing and Bay Point produced comparable results, but alas, no Harriers.

Determined not to completely dip on the target bird, a stop along Gandy's Beach Road finally produced a Harrier, and a recently fledged youngster at that. A fine way to end the morning.
Posted by Tom Reed at 2:00 PM