Bug of the Day: Robber Fly 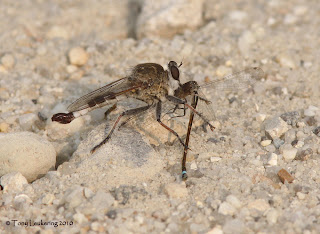 The family of robber flies (Asilidae) comprises a group of nearly 1000 species in North America, alone. The Kaufman Field Guide to Insects of North America describes them as being "to other insects what falcons are to other birds: swift predators on the wing." That book's introduction of the family continues with "Many act like flycatchers, perching on logs, foliage, twigs, or on the ground, cocking their heads at insects passing overhead, and dashing out to apprehend a victim." In this picture's case, the victim is a damselfly -- a group not known for aerial speed.

The robber fly depicted is of the genus Efferia (probably albibarbis), "an enormous genus" of some 100 species in North America. The genus is most diverse in the West, but this species is, I believe, relatively common in Cape May Co., as I've photographed it on multiple occasions (though multiple species may certainly be involved). The grayish-silver bands on the abdomen and the "conspicuous bulbous claspers" at the abdomen's tip are both good field characters of the genus. I included this picture (taken 7 July 2010 at Cape May Point SP), rather than others, because this fly's victim is an odonate, which is a group that has a considerable following among birders. The individual is a spreadwing (genus Lestes) and almost certainly a male Sweetflag Spreadwing, a species that has recently emerged in large numbers at various coastal-plain ponds.
Posted by Tony Leukering at 9:26 AM