Migrants + Report from the Arctic 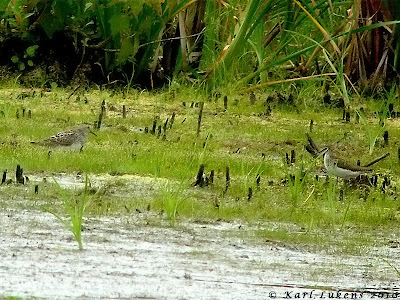 Mike Crewe's field trip report on this morning's Cape May Point Walk is worth the read - nice morning, with shorebirds and migrant Yellow Warblers zeeping overhead. To that Vince Elia adds an adult Least Flycatcher at Higbee Beach with a mixed flock of migrant Yellow Warblers and local Prairie Warblers. Vince says he had 25 Great Blue Herons on Bunker Pond this morning, but Mike's report only has 23, so I don't know who to believe. . .

In other news, the following information came across my desk while I was away. I quote part of Ron Pittaway's email to a shorebird group: "Reports from the Canadian Arctic indicate a generally much better breeding year for most shorebirds compared to the late snow melt and cold nesting season in 2009. Map shows the Canadian Arctic is mostly snow free and the sea ice in Hudson Bay is almost gone whereas ice remained well into August in 2009. . . Counting juvenile shorebirds south of the breeding grounds will give an indication of breeding success in 2010, which is a good reason to learn how to distinguish the age classes. . . -Ron Pittaway, Minden, Ontario"

This report contrasts with last year's difficult breeding season for shorebirds, which seemed to show in the form of a decided lack of southbound juveniles last summer/fall. The first juveniles of Arctic and sub-Arctic nesting shorebirds will begin appearing here at the very end of the month, probably in the form of a bright orangy Least Sandpiper or a speckly Lesser Yellowlegs.

[This juvenile Killdeer, part of a family group I found in Salem County this morning, shows marks we repeat like a broken record when explaining how to tell juvenile shorebirds from adults. The upperparts feathers are of uniform condition (because they all grew in at the same time and none have yet molted) and have pale fringes, giving the bird a scaly look. Many juvenile shorebirds are much more boldly marked above than this, with broader contrasting feather edges. This is a young juvenile, with some wispy natal down feathers showing at the nape, upper and undertail coverts, and tail, something not seen on the long distance migrants when they get here. Both juvenile and adult shorebirds are present by the time our shorebird workshop rolls around in August, offering a great chance to practice aging.]
Posted by Don Freiday at 4:28 PM