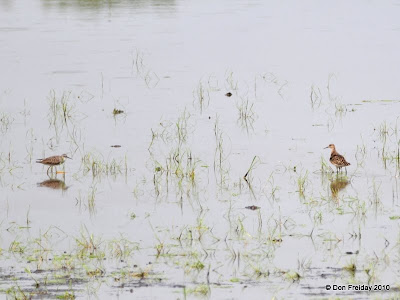 "Don, do you know about the Ruff?" I was talking to the CMBO shorebird workshop group about banded plovers, as we watched a Killdeer, when Michael O'Brien came over and sort of whispered this to me. No, we didn't know - our workshop group had just reached the Bear Swamp Pool at Bombay Hook NWR, DE, and hadn't scanned it yet - but needless to say, very quickly a bunch of people got their life Ruff! Shortly after, a Wilson's Phalarope was discovered - there is some debate as to which Cape May vagrant-birder spotted that one, but it was pretty cool to see Ruff and WIPH next to each other. This all came down during CMBO's Bombay Hook Workshop, across the bay in Delaware. A few Wilson's Storm-petrels were had on the return trip from the Cape May-Lewes Ferry near dark after the workshop. Our list from the refuge - which included 92 species, among them American Avocet, Black-necked Stilt, both eastern races of Short-billed Dowitcher and numerous Long-billed Dowitchers, Stilt Sandpiper, etc. - is up on Field Trip reports. Mark Garland and/or I lead this one almost every year, but if you can't wait there are just a few spaces left on the August Shorebird Workshop, with Michael O'Brien and Pete Dunne.

A few of us gathered on the Higbee Dike this morning for a flight that would have had everyone complaining. . .if it were mid-August or later. Conditions after the cool front (can't quite call it cold) were very good, but a few Yellow Warblers, a few American Redstarts, a single Prothonotary Warbler, and a few other this-and-thats were "all" we could muster.

Chris Hajduk had an adult Lesser Black-backed Gull at Poverty Beach yesterday. There was a 2nd cycle (i.e. a first cycle just starting to molt) at Port Mahon, DE yesterday and the day before. 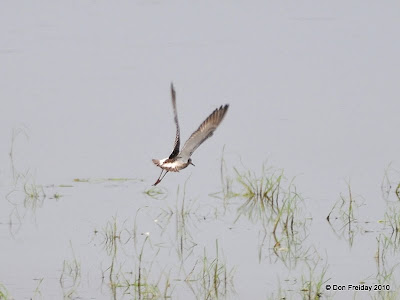 [Ruff in flight - note the u-shaped white patch on the rump, and the gleaming white underwing. This is a bird easily picked out from a flock in flight.]

[An unusually marked Semipalmated Sandpiper, with normal ones and a Western Sandpiper (back left bird) yesterday at Bombay Hook. This kind of thing can result from a mutation or appear in a bird that received a blunt trauma injury that damaged pigment-producing cells, e.g. being hit by a Peregrine or flying into a wire.]

[American Redstart in a glide, this morning at the Higbee dike.]
Posted by Don Freiday at 3:50 PM