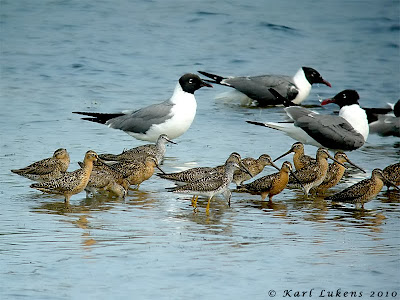 [This is an interesting photo of Short-billed Dowitchers and Lesser Yellowlegs from Karl Lukens, taken yesterday at Cape May Point State Park. Counting just dowitchers from the left, #'s 1, 3, 6, 7, 10 & 12 are of the eastern subspecies griseus, and the rest are of the brighter central Canadian subspecies hendersoni. One wonders how long these birds have been traveling together - Michael O'Brien suggested they met up in Cape May or not far away when I asked him about it. You can't always be sure of subspecies, especially in the mid-Atlantic where intermediates seem to be more common than they are at the ends of their ranges. The left two birds make for a nice comparison, far left being griseus, 2nd from left hendersoni. Hendersoni has more orange below, is evenly spotted or with short bars on flanks and sides, brighter on the upperparts, and has well marked wing coverts. Remember, if you use plumage to i.d. shorebirds to subspecies or species, you have to age them first, because juvenile and non-breeding birds look different from these adults. On the other hand, size and shape characters are always good - for example, we can tell these are Lesser Yellowlegs with the dows because they are about the same as the dows in body size. Greater Yellowlegs is noticeably larger than a dowitcher. If you want more on this, there could be no better place to get it than from Michael on our August Shorebird Workshop. Click to enlarge photo.]

It's really started, southbound migration I mean. Yes, there have been ibis, dribbles of shorebirds, and landbirds too, e.g. the Bobolinks of late or the Yellow Warbler on Monday in the meadows, but Karl's photo (above) stopped me - a pack of migrants. Today I had a flock of 45 Short-billed Dowitchers over the Garden State Parkway. Like Mike said below, every day is different until winter. But you can never step in the same Cape May twice, regardless of season.

A favorite sighting on this morning's Bird Walk for All People was the family group of Barn Swallows, 5 young out with their parents, obviously new young with not only stubby tails but fleshy yellow gapes, clearly recent fledges. The swallows spent some time perched on the ropes near the plover pond. Perhaps thanks to the cloud cover, the locals were singing well, including a vocal and visible Song Sparrow along the dune path (maybe they're working on a late summer brood?), Blue Grosbeak, Indigo Bunting, etc. The dowitchers and yellowlegs were still about, with Least Sandpipers and Killdeer, including a fledgling. The second plover pond had a fledged Piping Plover, and the near-grown American Oystercatcher chick was with its parents out on the beach towards the meadows. 10 Great Blue Herons on Bunker Pond were also noteworthy. The full list is up on field trip reports - we had enough activity along the dune trail that we never made it into the woods.