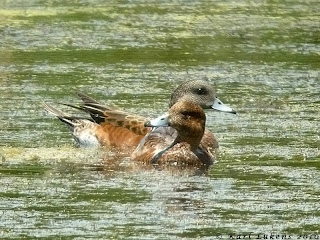 [Click on image to see a larger version. Karl Lukens took this picture of the Eurasian (in front) and American wigeons yesterday (9 July) at Cape May Point SP.]

This morning, Vince Elia noted the continuing presence of the record-early American and Eurasian wigeons at Cape May Point SP, found yesterday by Sam Galick. They were in the east Lighthouse Pond. Vince also found a Western Sandpiper and two Gull-billed Terns on Bunker Pond in the Park. The late-morning rain here probably negatively impacted the amount of birding effort, but perhaps the rain also knocked some stuff down; hopefully, others have had more time today than I have to search for such things.
Posted by Tony Leukering at 4:51 PM