Summer's heat has settled in to Cape May and a post-breeding season, pre-migration lull could easily take a hold if you just take your eye off the ball for a second. But Cape May always has something to offer, and our weekly walks continue to provide a wonderful array of wildlife experiences. At this time of year, the best rewards come from coastal wetlands as migratory shorebirds continue to move through. Unfortunately, good habitat for shorebirds is hard to find this year as occasional overnight downpours are keeping water levels high, but The Nature Conservancy is to be commended for efforts to keep conditions at The Meadows as close to ideal as possible.

It's still a little early for juvenile shorebirds to be passing through Cape May on their way south from Arctic breeding grounds, but juvenile Spotted Sandpipers, with their dapper wing bands, are starting to show up having fledged from nests much closer to here than the Arctic. Most other shorebirds, however, continue to appear as rather scruffy-looking adults; and these are fascinating to study as field guides don't tend to illustrate such birds, so there's not only an extra challenge in identifying them at times, but also much to be learned. These birds will be in the midst of losing their breeding colors and growing fresh, non-breeding plumage. The molt cycle, again, is an area that field guides generally steer away from. But birds - especially larger non-passerines such as gulls and birds of prey - spend a significant amount of their annual cycle going through a molt of some sort, so learning to identify birds when they are in these transitional phases can be challenging, but useful. So, here's the week's highlights, a mixture of surprise finds and thought provoking birds... 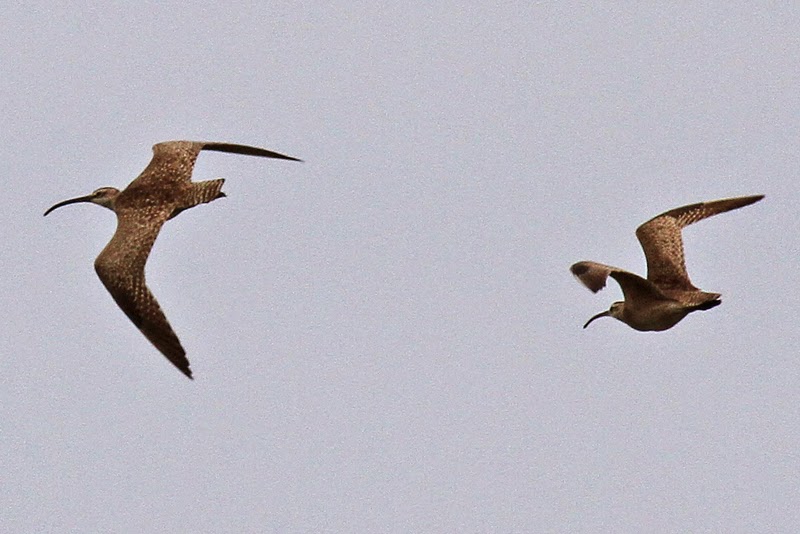 Keep an eye on the skies - some shorebirds really don't hang about. A flyover bird may seem daunting to identify, but there's plenty of clues to work with. If you keep in mind which parts of the bird to look at, it can be done quite quickly and efficiently. In these birds, check bill length/shape, presence/absence of a pale rump, presence/absence of a wing bar... these all dark birds with long, decurved bills are easily identified as Whimbrels - to brush up your shorebird skills, you might like to try our shorebird workshop with Michael O'Brien - there's no better way to learn these fascinating birds [photo by Mike Crewe]. 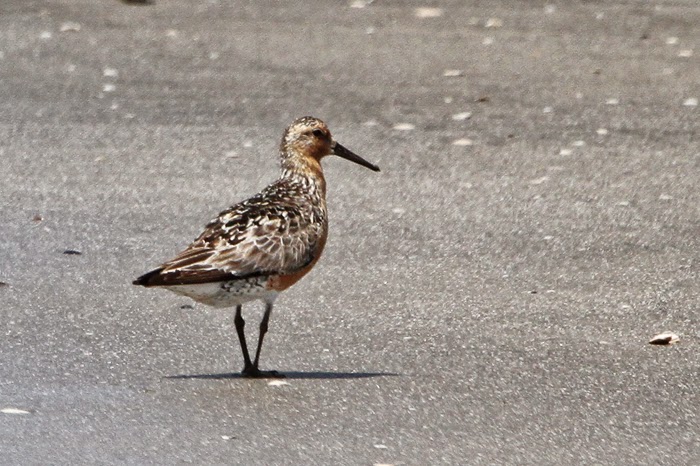 Stranger on the shore - Red Knot can look very odd at this time of year; the pale edges have all worn off on the upperpart feathers, leaving a heavy, dark appearance and the rich rufous underparts are stained and sullied. After a complete molt, this bird will be a dapper pale gray but for now, well, he doesn't look like the picture in the book. So try and use consistent features to aid your identification - judge size compared against other nearby birds, judge bill length relative to head length and judge leg length relative to body size. To my eyes, Red Knot are chunky, medium-sized shorebirds with a mid-length bill (not too short, not too long and about the same length as the head from bill base to nape), while the legs are stocky but short and always look just a little too short for the size of the bird - a unique combination [photo by Mike Crewe]. 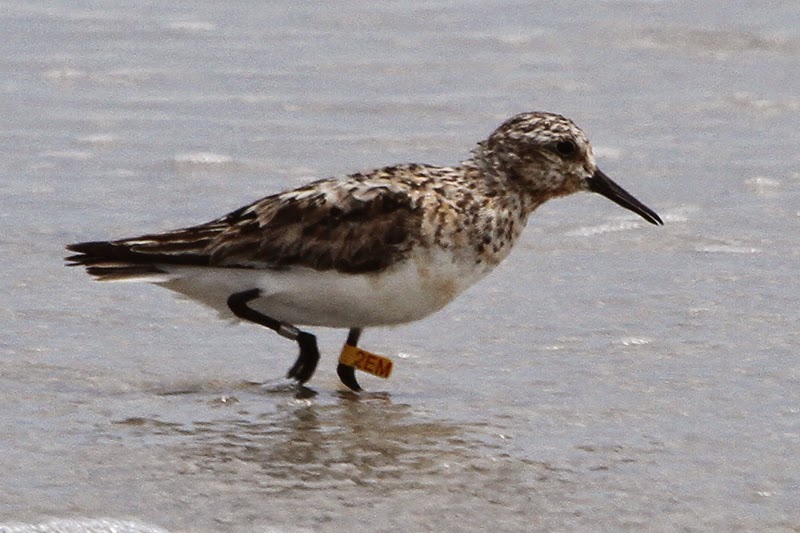 Make your birding count. Sanderlings are a long way from the pale gray and white birds of winter right now, so look for a dull brown back and - especially - washes of reddish brown around the face and chest. Sightings of returning adults at this time of year can be of increased significance if the bird is wearing a color flag, for the observation can be submitted online and will add valuable information to a growing database of knowledge on these global wanderers. The color of the flag tells you the country that it was tagged in - yellow on this bird indicates Guyana - so this bird is already of great interest. Hopefully my sighting of E2M at Stone Harbor recently will tell researchers a lot about its movements; if you find such a bird yourself, you can enter the information at the Banded Bird website [photo by Mike Crewe]. 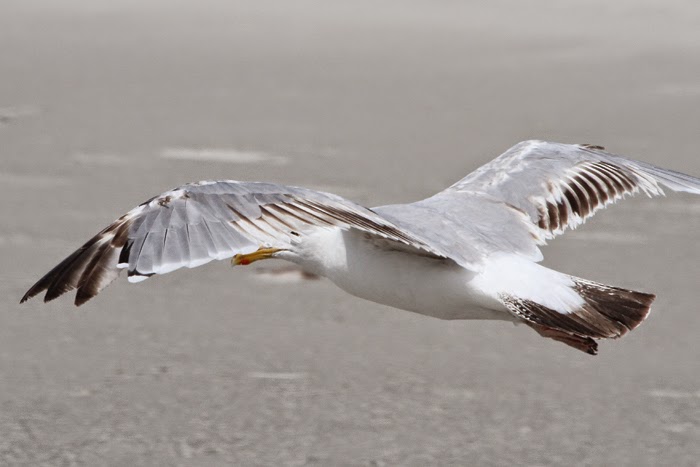 Now is the perfect time to start trying to understand molt in birds, for now they are in the thick of it. Check out the gulls on the local beaches and you will soon find some scruffy looking individuals that will help you unravel what is going on. Birds such as this third calendar year American Herring Gull are ideal since it is at this age that this species finally swaps the brown primaries of a youngster for the gray, black and white ones of adulthood. This makes spotting the difference between old and new feathers a lot easier, because the contrast is easily seen - this bird has three outer primary flight feathers still to switch out for new ones - notice how each feather is molted sequentially, not all at the same time, so that the bird's flying ability is not affected. The first new feather just in from the three outer, old ones, is clearly much shorter and still growing [photo by Mike Crewe] 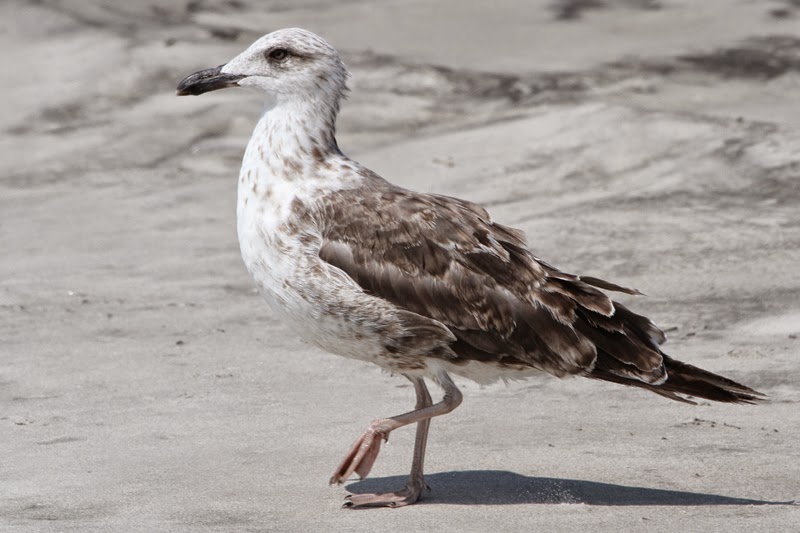 Throughout the summer, there is plenty of opportunity to study Lesser Black-backed Gulls, as these essentially Old World birds now seem settled on this side of the pond. Here in Cape May, we are not far off the same latitude as NW Africa, where large numbers of immature, non-breeding Lesser Black-backs spend their summers before they are finally old enough to breed, so it's not surprising that we get a few here now. To seek them out for study, try Stone Harbor Point or the South Cape May Beach. Though both sites are heavily disturbed by tourism, with patience you can usually pin one or two for study or photos for a short period at least [photo by Mike Crewe]. 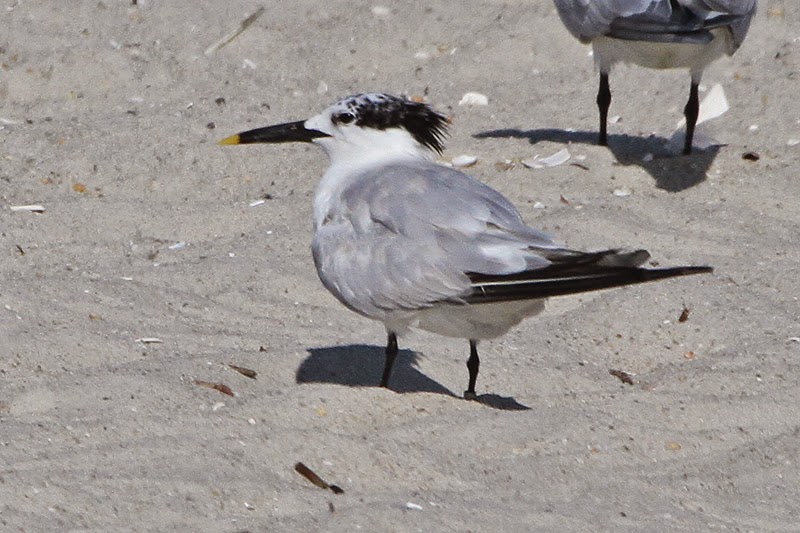 While out looking for shorebirds, keep an eye on the tern flocks that shift around Cape May Point looking for a bit of peace and quiet. One or two Sandwich Terns usually show up at this time of year, but they remain elusive and flighty here. As seen here, look for a bird with a shaggy hair cut and black bill, tipped with yellow. This bird is banded, so it is not the same individual as was present at Bunker Pond recently [photo by Mike Crewe]. 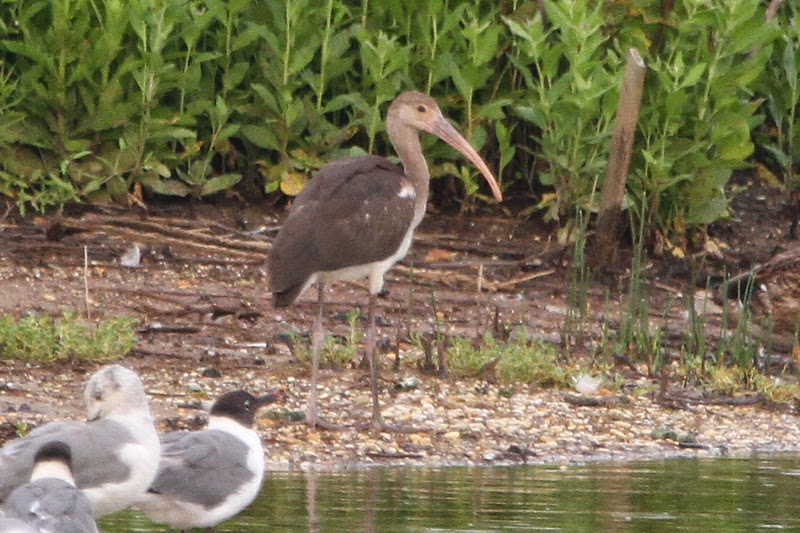 Another recent visitor, this juvenile White Ibis wandered up from the south and was seen at The Meadows on Sunday evening, then again briefly on Monday morning. It was last seen feeding on a rain pool off Stevens Street on Monday, before heading toward Pond Creek Marsh... maybe it's still out there [photo by Mike Crewe]. 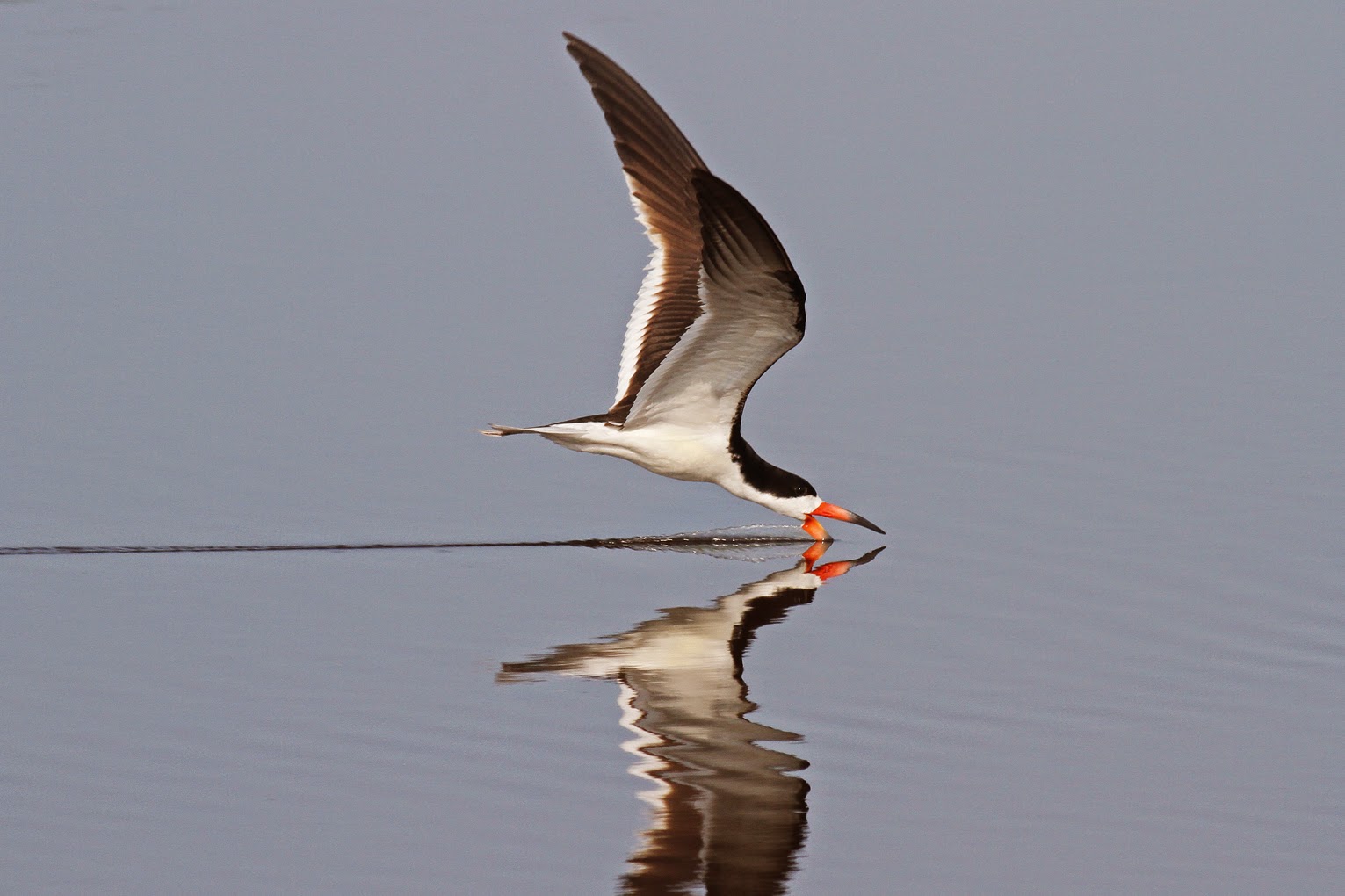 And finally... photos of molting birds and of rarities can be educational or have scientific value, but don't forget to just enjoy photographing birds for art's sake sometimes... Black Skimmers favor The Meadows in the evenings and can put on a great show at times [photo by Mike Crewe].


DON'T FORGET - coming up - Purple Martins at Mauricetown, August 8 & 9, Shorebirds workshop with Michael O'Brien, August 13 & 14, Butterfly workshop with Will Kerling, August 21... and so much more - just check out our Activities Calendar.
Posted by Mike Crewe at 5:57 PM