At the risk of sounding as though I am saying "I told you so" - I told you so!! Well, predicting bird arrivals is a very tricky thing; weather conditions have to be just right, including wind direction, wind strength, lack of precipitation (or, if it does rain, the right amount in the right place at the right time) and, of course, the birds have to be in the right place at the right time to be delivered to us. After suggesting that Higbee Beach would be the place to be this morning, I got panicky about the forecast 14mph winds, set to last all night. Perfect migration conditions for songbird flights generally require a light head wind, not gusty double-figures...

However, it all turned out good this morning. The annoying thing about Cape May (I know, I know, even paradise has problems!) is that there are always choices to be made when it comes to where to head for first thing in the morning; the dune line at the point can be excellent in the right conditions, as can Sunset Beach, and Higbee Beach. Then at Higbee's, do you go to the fields or the dike? Tom Reed tells me that the point was pretty quiet today, so I did make the right decision in heading for the fields - but the dike was pretty impressive too I hear. Overall, Higbee Beach provided some great early-season birding this morning, with exciting movements of Red-winged Blackbirds, Cedar Waxwings, Bobolinks and Eastern Kingbirds. The latter species is building up nicely in the fields too (a traditional staging area, where the birds are currently feeding on this year's bumper crop of Black Cherries) and we saw around 150 Easterm Kingbirds today - though the wheeling around of the main flock made accurate assessments tricky.

In the fields, Yellow Warblers, American Redstarts and Indigo Buntings seemed to be the main species on the move, but there were Black-and-white Warblers too, a handful of Common Yellowthroats and a few Worm-eating Warblers. Our first juvenile Chestnut-sided Warbler of the season was nice to see and David La Puma later reported a Blackburnian Warbler from the parking lot. Flycatchers usually feature early in the season and create headaches for most of us as they really are just too darned similar to each other for comfort. A probable Willow Flycatcher toyed for our attention for some time, but a nicely teed up Olive-sided Flycatcher gave no such problems.

If you missed this morning's activity, tomorrow morning looks promising too, as north-west winds are forecast to last another 24 hours. If you want some help and guidance with your migrants, or just some good company, join our CMBO walk which departs the Higbee Beach parking lot at 7AM tomorrow morning (easily found at the dead-end, western end of New England Road, just south of Cape May Canal - see you there! 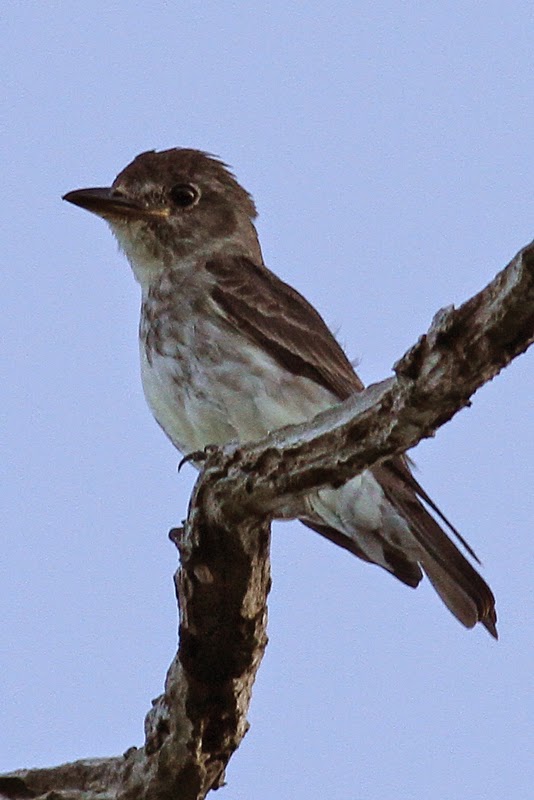 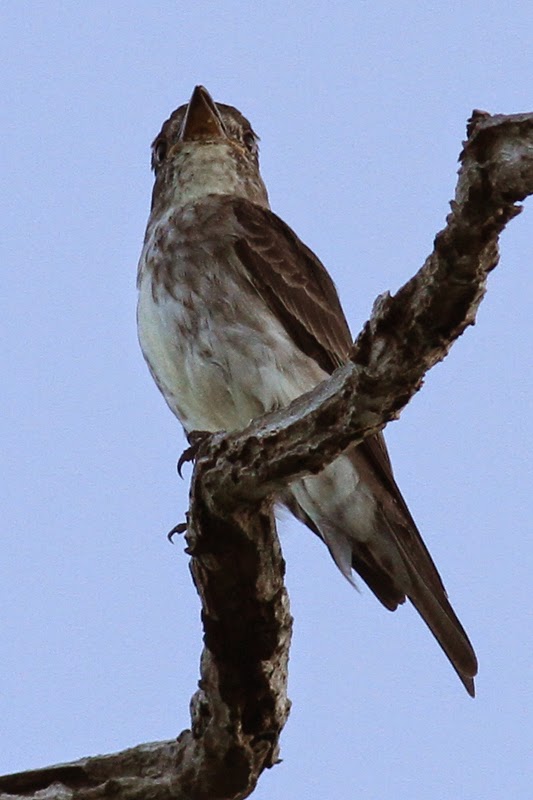 Arrrg, a Fall Flycatcher!! Many of the flycatchers seem impossible to deal with in the fall but, with some species, there is hope - don't give up too soon!! This Olive-sided Flycatcher was found by my wife this morning and there is much about it that helped us to identify it pretty quickly. Olive-sided is not one of those hideous Empidonax flycatchers, it's a Contopus - which immediately offers us hope! Start by ignoring the detail and look at the outline of this bird; look how disproportionately big the head and bill look and how short the tail appears - all good Olive-sided clues. When it comes to plumage, notice the dark marks on the undertail coverts, but note especially the smudgy, dark breast sides. These are classic Olive-sided features; many books mention the appearance of a dark vest, but I think of the dark chest of an Olive-side Flycatcher like this; imagine a car mechanic working on a car with oily hands; the phone rings, he needs to answer it - where does he wipe his hands? Down his chest! And the greasy finger marks are streak, not evenly dusky like the pattern on the chest of an Eastern Wood Pewee. One final clue to the identity of this bird - notice how it is sitting right up against the sky, atop a dead snag - classic Olive-sided Flycatcher behavior [photos by Mike Crewe].
Posted by Mike Crewe at 12:24 PM