waterbirds, shorebirds and birds to come...

After a week of very stressful north-easterlies, the weather looks set to provide us with a new suite of birds over the coming 48 hours - which should alleviate tension in the birding community at Cape May!! Despite a lack of the much hoped-for north-westerlies, there's been plenty of great birding around Cape May to keep all but the most jaded of birdwatcher happy. Wild Turkeys continue to set new all time high counts south of the canal, pre-migration heron roosts give ample opportunity to enjoy the spectacle of mass gatherings of birds, and shorebirds continue to add variety to many of our weekly walks. Tom Reed has been reporting in his weekly round-ups in this blog on the spectacular heron roost that has been readily watchable from Stone Harbor Boulevard over the past few weeks. Numbers are starting to fall away a little now as the smaller herons (Little Blues and Tricoloreds) began their southward migrations, but there's still plenty of Great and Snowy Egrets and Double-crested Cormorants to make a sunset visit worthwhile. You can view the birds coming in to roost by watching northward from the Scotch Bonnet bridge, half way along Stone Harbor Boulevard (Rt 657).

The warbler flight has yet to really pick up, but American Redstarts and Northern Waterthrushes are showing good intent and several Cape May Warblers put in an appearance this morning. Numbers should continue to increase over the coming few weeks... 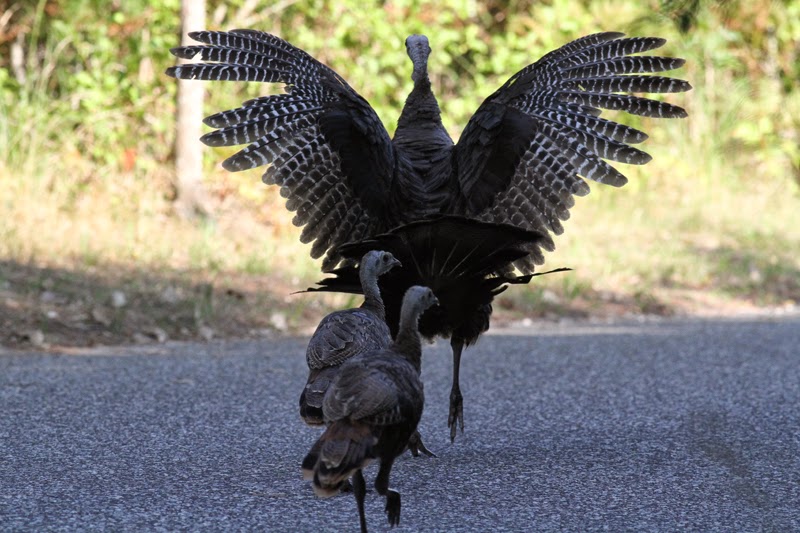 Wild Turkeys continue to establish themselves firmly south of the Cape May canal. This female with two youngsters strolled casually down the road outside the Northwood Center recently, pausing to feed on Autumn-olive berries. Yes, everything is a bitter-sweet pill these days; while having turkeys around will mean fewer ticks, it will also mean that all those hideous invasive plants will be spread around more efficiently... [photo by Mike Crewe]. 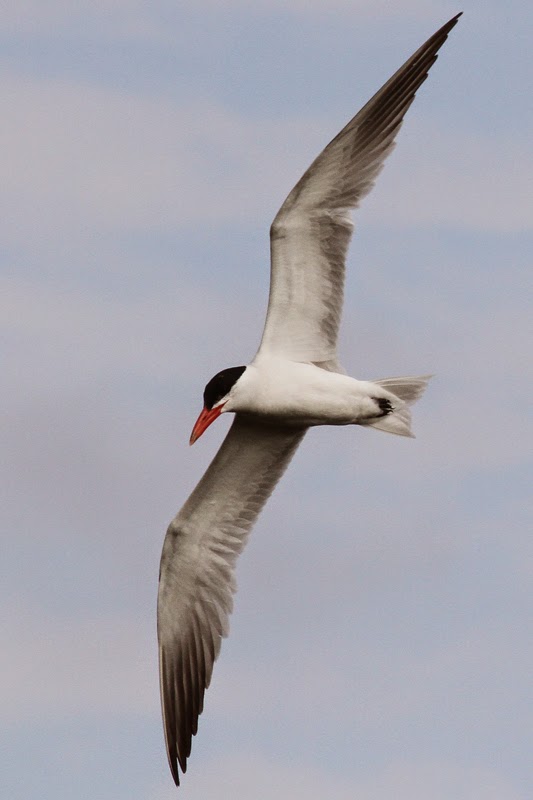 Last Friday saw the third, annual Pledge 2 Fledge event at Cape May Point State Park. CMBO were there, manning a membership table and running a 'Little Sit' on the Hawkwatch Platform. This latter event notched up 63 species from 3:00-6:00PM and visitors enjoyed some great birding, including this Caspian Tern that took a few spins around Bunker Pond before heading off in search of a meal at The Meadows [photo by Mike Crewe]. 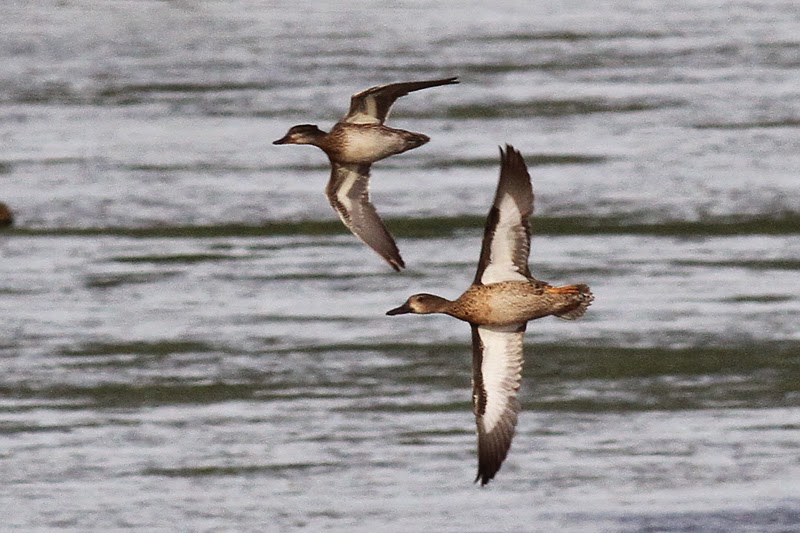 Also on our Pledge 2 Fledge 'Little Sit', a party of Blue-winged Teal (lower right bird) flashed around in front of us. Among their number was a Green-winged Teal (upper left bird), giving a great opportunity to compare the distinctive and very different underwing patterns of these two species [photo by Mike Crewe]. 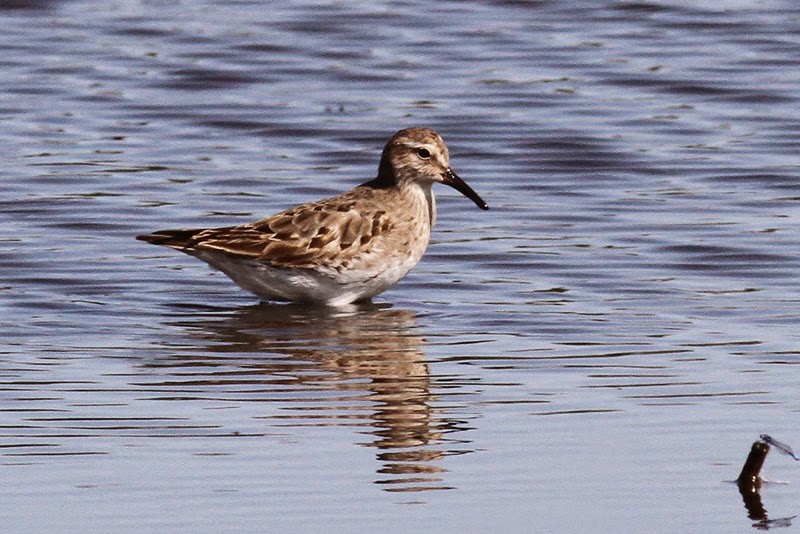 Shorebirds have moved into 'phase 2' of their migration through Cape May recently; that is to say, the predominance of adults in most species is now being replaced by dapper juvenile birds. One exception is White-rumped Sandpiper, which is a species that tends to peak in number a little later than other shorebirds here. This bird is a molting adult and, as can be seen here, adult White-rumps in fall are not really the most inspiring of shorebirds! [Photo by Mike Crewe] 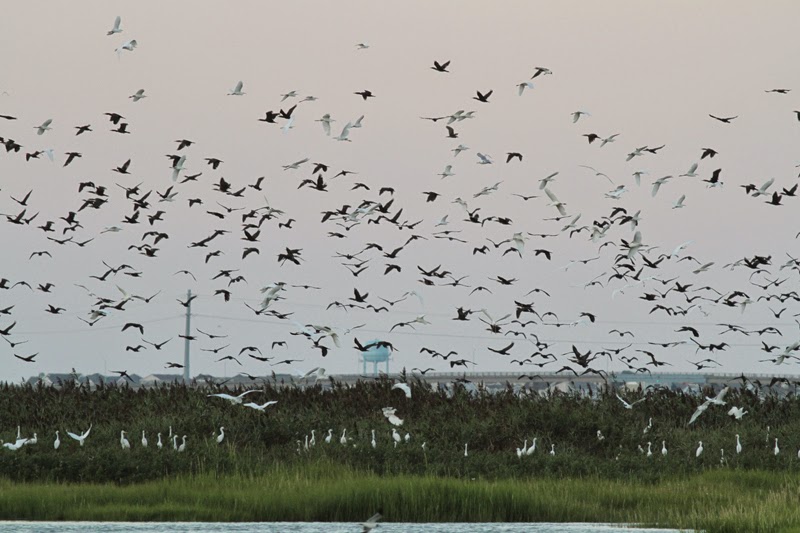 Large gatherings of birds are always spectacular and evening roost gatherings of waterbirds certainly impress. Much thanks is extended to Bob Lubberman of The Osprey for taking a bunch of us out to get more accurate counts of numbers of birds coming in to roost near Stone Harbor recently [photo by Mike Crewe]. 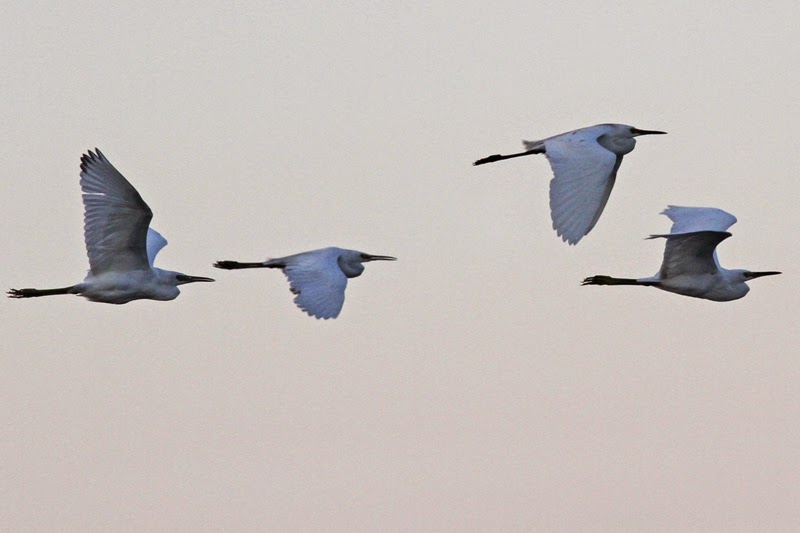 One of these birds is not like the other ones... Getting up close to flight lines of herons and egrets going to roost allows for a better analysis of the species make-up of the flocks. Look carefully at the bird on the left and you should see black tips to the flight feathers. This bird is a juvenile Little Blue Heron and odd singles like this are easily missed among the large numbers of Snowy Egrets heading into roosts right now [photo by Mike Crewe].
Posted by Mike Crewe at 12:11 PM