When something crunched under Sam Galick’s shoe as he stepped out his back door a few weeks ago, he assumed it was a twig that had fallen onto the deck. He certainly wasn’t expecting to lift his foot and see North America’s biggest beetle crawling away, quite unharmed. And when I say big, I mean big – the Eastern Hercules Beetle is more than two inches long. 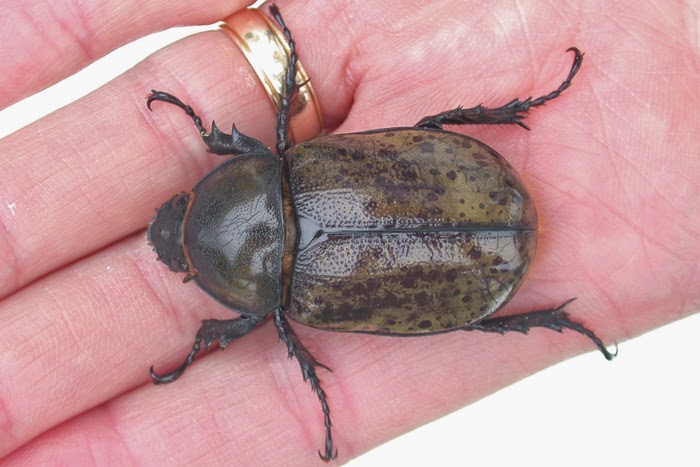 It turns out that Sam’s beetle was a female, drawn to the lights on his porch. As you can see in the above photo, she’s olive green and sprinkled with irregular black spots. A male would have been even bigger – though not by much – with a pair of horns at the front, one that curves up from the head and a second even longer one that curves down from the pronotum (the segment of the body behind the head) to meet it. Despite their somewhat scary appearance, the beetles are not dangerous and not known to bite; certainly Sam and his roommate handled this one repeatedly with no bad experiences.

Although the beetle is quite widespread in forests throughout the east, ranging from New York state to Florida, and west to southern Illinois, western Arkansas and eastern Texas, it isn’t easy to see, as it spends most of its life underground. Females lay their eggs directly in the soil. At 3/16 of an inch (5 mm), these shiny, white eggs are huge for an insect. The eggs hatch roughly a month after they’re laid, and the white grubs live underground, feeding on decaying plant material. For males in particular, finding a good food source is important; the better their nutrition levels as larvae, the longer their horns are!

Often, the larvae move from the soil up into rotting tree stumps, feeding on the decaying heartwood; they never attack living trees. After 6-12 months of stuffing themselves, the larvae pupate, emerging a few weeks later as adults. Even then though, they remain underground, waiting until spring to venture forth. Males seek out ash trees and make “sapping spots” on the branches, using their long horns to shove rival males away from the food sources. The sap attracts females too, which use pheromones to attract males for mating.

While most of us are unlikely to be as lucky as Sam in finding an adult Eastern Hercules Beetle, it is possible you might come across a larva lurking in the earth as you dig in your garden. Keep an eye out for a very big C-shaped grub!
Posted by Megan Crewe at 2:48 PM