--===============--
WATERFOWL THROUGH STORK
An unseasonably large group of Black Scoters, likely still numbering over 100 individuals, remained at CMP through the period (m. ob.). At least 4 Surf Scoters could also be found with this group at times (m. ob.). Gadwall remained a regular sight at CMPSP and SCMM; a recent high count of 13 was obtained at CMPSP on 6 Aug (m. ob.). Wild Turkey reports included a group of 8 near the corner of New England & Bayshore Roads 4 Aug (MeC), and a female leading 2 young birds along Lighthouse Avenue, CMP 8 Aug (TR). Wilson's Storm-Petrels are becoming less regular from shore, as often happens after mid-Jul. This week's only land-based reports were all of single birds, viewed from CMP 3 Aug (MS) and 8 Aug (TR). A whale-watching trip produced 15 Wilson's Storm-Petrels on 4 Aug (DL). A Cattle Egret flew in off the ocean before it briefly put down at SCMM 4 Aug (VE). A juvenile White Ibis entertained numerous observers at SCMM 3–4 Aug (DF, m. ob.). It was last seen along Stevens Street, West Cape May 4 Aug (m. ob.). Several White Ibises have appeared in the Delaware Valley since mid-Jul, and observers should be on the lookout for this southern stray. Another wanderer from the south was a Wood Stork over CMP 7 Aug (MP, MiC, JS). This individual represents approximately the 12th Cape May County record. A Wood Stork was also reported later the same day, flying over Route 47 near Reed's Beach (WK). There have been no sightings since. 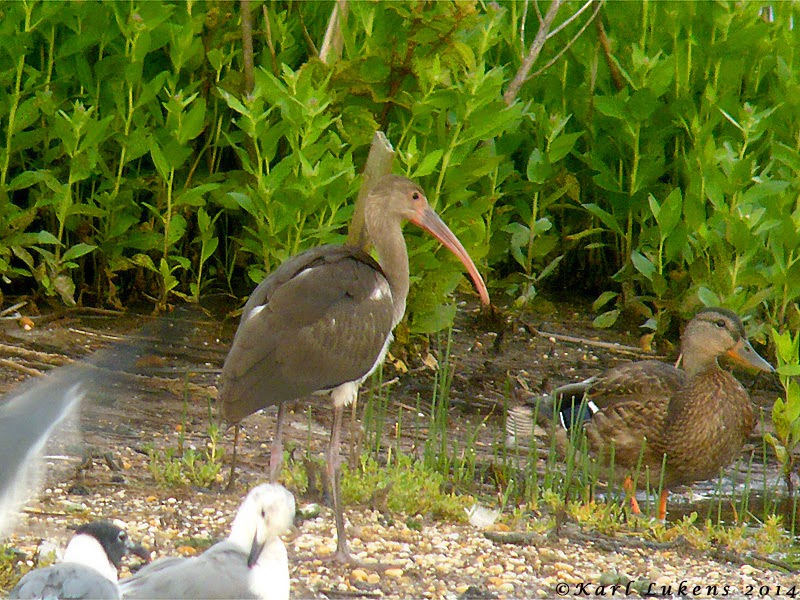 [White Ibis at SCMM, 3 Aug. Photo by Karl Lukens.]
RAPTORS THROUGH SKIMMER
Cape Island's first Broad-winged Hawk of the season was noted near the corner of New England & Bayshore Roads 7 Aug (MiC) and more interestingly, a juvenile Red-shouldered Hawk was photographed over Cape Island the same day (AA). Water levels at SCMM and CMPSP have become unfavorable for shorebirds, and most reports during the past week were restricted to fly-over migrants. The county's 6th American Avocet of the season shot past CMPSP 2 Aug (DF et al.). An evening shorebird flight along the Delaware Bayshore included a Hudsonian Godwit and a Long-billed Dowitcher over Reed's Beach 8 Aug (TR). Intriguing were the 2 Pomarine Jaegers spotted from the 2nd Avenue jetty in Cape May City 3 Aug (SR). A Sandwich Tern and a Black Tern put in brief appearances on the CMPSP beachfront 5 Aug (VE), and Royal Tern numbers increased through the week (m. ob.). Approximately 100 Black Skimmers have been noted at Poverty Beach in recent days-- the species is nesting at the site this summer (fide NJDFW).
[Wood Stork over CMP, 7 Aug. Photo by Mike Pasquarello.]
COLLARED-DOVE THROUGH SONGBIRDS
After another lengthy absence, a Eurasian Collared-Dove was seen from SCMM as it flew toward Cape May City 7 Aug (TR). Observers are encouraged to continue reporting any sightings of this species. On the heels of the latest cold front, a couple of Common Nighthawks were observed over CMP 7 Aug (MP), followed by another over Erma 8 Aug (TB). Red-headed Woodpeckers bred in the Green Creek section of Middle Township this year; an adult and two juveniles were noted on private property 4 Aug (TB). Merlins have appeared with increasing frequency during Jul and Aug in recent years-- 2 were ahead of schedule at SCMM 8 Aug (m. ob.). A locally scarce migrant, the season's first Olive-sided Flycatcher was a smidge early at Higbee Beach WMA 7 Aug (VE). The flycatcher was part of a post-frontal songbird movement that also included 50 Blue-gray Gnatcatchers, 100 Yellow Warblers, 55 American Redstarts, 20 Orchard Orioles, and the season's first Chestnut-sided Warbler at Higbee Beach (VE). Additional southbound arrivals at Higbee included Mourning Warbler 4 Aug (MS), Least Flycatcher 7 Aug (VE), and Warbling Vireo 8 Aug (MG).