WATERFOWL THROUGH TERNS
Approximately 100 Black Scoters, and at least 2 Surf Scoters, continued their stay at CMP through the period (m. ob.). Wilson's Storm-Petrel reports continued to diminish, but a handful were seen during ferry crossings (m. ob.). The fall's first Green-winged Teal appeared at CMPSP 14 Aug (TR). A juvenile White Ibis was seen at the Cox Hall Creek marsh, along Clubhouse Drive in Town Bank, 12 Aug (TM, m. ob.). There have been no reports since. Westerly winds brought a Broad-winged Hawk over SCMM 15 Aug (VE). The season's 7th American Avocet was found at SCMM 14 Aug and continued through 15 Aug (RT, m. ob.). An Upland Sandpiper made for a surprising sight on the west path of SCMM 15 Aug (VE). A strong movement of shorebirds followed heavy rain associated with a cold frontal passage 13 Aug. This flight was easiest to observe at Cape Island, where 550 Lesser Yellowlegs and 120 Stilt Sandpipers flew south past SCMM during the AM hours (MO'B, m. ob.). Multiple American Golden-Plovers were noted after the storm at Cape May Airport 13 Aug (JN, BB), and 2 were seen over West Cape May 14 Aug (MO'B). Several observers sent along reports of White-rumped Sandpiper in recent days, including multiple sightings at SCMM. Mid-August can be a good time to find Marbled Godwit-- a group of 4 dropped in at SHPt 13 Aug (EH). SHPt was also home to 600 Sanderlings and 9 Lesser Black-backed Gulls 14 Aug (m. ob.). Black Terns became more obvious during the second half of the period, with sightings logged at SHPt, SCMM, and CMP (m. ob.). The SCMM beachfront was home to a pair of Sandwich Terns 15 Aug (VE). 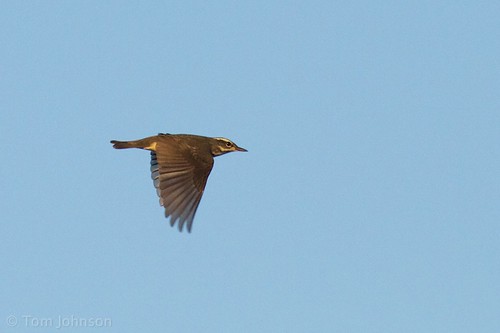