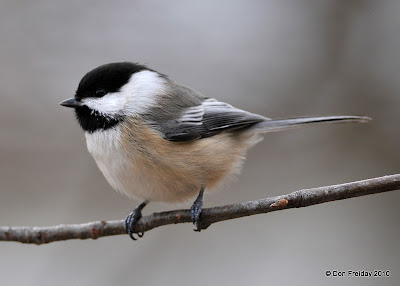 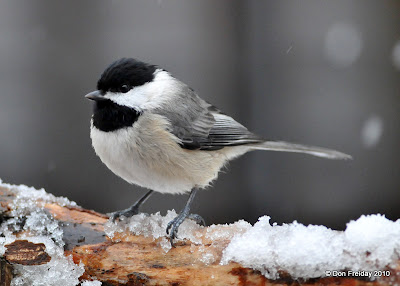 [Top, Black-capped Chickadee, West Portal NJ December 19, 2010. Bottom, Carolina Chickadee, Del Haven, NJ, February 25 2010. Click to enlarge. . but you're better off just flicking your eyes up and down between the birds to compare features.]

Having spent very almost no time in Cape May during December, I've got relatively little Cape May-relevant to talk about. E.G., I'm in Florida at the moment, ironically wanting to be in the Cape May blizzard watching my feeders. A report just came through of a Black-capped Chickadee at a private feeder in Cape May county, the second county-first species in 3 days if correct (the first being the Varied Thrush). Soooo. . . Let's consider the chickadees.

Chickadees make a great bird to remind ourselves that not all indivduals of the same species look the same. On a north Jersey CBC this year I wrestled with a Spizella sparrow that was "too" gray and "too" dull to be a Clay-colored Sparrow (itself a great NJ CBC bird), which means only it was grayer and duller than any Clay-colored I'd ever seen. I decided in the end the bird was "just" a Clay-colored, thanks to insights from friends and examining a variety of photos on the web. So be careful. Shapes can vary wildly with posture. Feathers can wear, so just because it doesn't show much white edging on coverts or tertials doesn't mean it was never there, especially if you are looking at a spring or summer chickadee. And some individual chickadees show more or less white or buff than others, or more or less ragged bibs, just because.

We can also remind ourselves that identifying photos of birds is different than identifying birds. I think these two photos show chickadees in the same overall posture, so the shapes should be comparable. I actually think the photos look very close to what a human eye would have seen, but on the lower bird the highlights are perhaps a bit "blown," e.g. the cheek is a bit too white and we might have lost a bit of color. Maybe. The bottom bird was also in colder light, literally - in snow.

With a healthy dose of the above in mind, compare the following characters on the two chickadees pictured:

1. Size and roundness of head.
2. Overall "contrastiness" of the bird.
3. Edging on tertials (tough to see on this angle,and perhaps even misleading in these photos).
4. Edging on greater coverts.
5. Size/prominence of white cheek, and degree to which it blends into the nape, or doesn't.
6. Amount of buff on flanks.

Something I left off the list of characters is overall size, because you can't do that with separate photos, but I will say that while you couldn't exactly call a Black-capped Chickadee "ginormous," moving to Cape May has made the Black-cappeds look darn big when I stray northward.

I'm not sure when I'll next be on a computer, so I invite my co-bloggers to chime in. Perhaps we'll offer a few "quiz"chickadees to challenge the readership. . .
Posted by Don Freiday at 4:32 PM