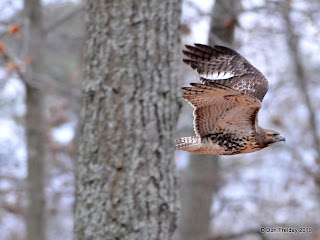 [Juvenile Red-tailed Hawk, Villas WMA on Sunday.  What's with the white mark on the far wing? Sometimes a bird's feathers don't align properly (one reason birds spend so much time preening), and the result can be a marking out of place. In this case, the redtail's fourth primary (P4; primaries are numbered from the inside out) has somehow gotten on top of the next one in, P3. On both wings and tails, outer feathers are supposed to slide under inner ones. The result of misaligned P4 here is that we can see the inner web of P4 from above, which we normally can't and which is much paler than the outer web of that feather and the outer webs of the rest of the flight feathers, hence the white slash in the wing. Click to enlarge photos.]

But Tony, I thought "Lucy" was a boy! [See Tony's post on aberrant plumages below.] "She" was certainly a smallish Red-tailed Hawk, which points to male. I still think "Blondie," the Clint Eastwood character from The Good, The Bad, and The Ugly, would be the best name for the bird.

Speaking of red-tails, I finally got the old camera back from the shop, and trundled it around Villas WMA on Sunday for a test drive, hence photos here. Remember, young Red-tailed Hawks have barred tails, not red ones.

For what it's worth, I've spent the past two days sitting in a tree in northern NJ listening from pre-dawn to dark (while deer hunting), and heard exactly zero siskins, redpolls, crossbills, and grosbeaks. Not one. And if you think it's cold in Cape May right now, try sitting perfectly still for hours on end on a north Jersey ridge with the wind howling! The regular Pileated Woodpecker sightings were a bonus, however, since we don't get that species down in Cape May. Speaking of north Jersey regulars we don't see, a little birdie whispered of a Ruffed Grouse seen well in Cumberland County the other day, along Route 555. This species has essentially disappeared from southern NJ, e.g. we listed it as extirpated on our most recent Cape May checklist. Grouse are known to make fall dispersal flights, and I wonder if the Cumberland bird is a persisting local or a new disperser. It was seen not far from where one was seen a couple years ago. 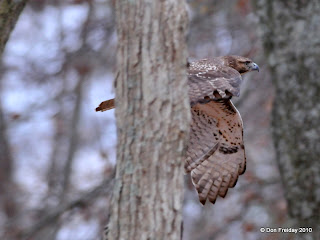 [Same Red-tailed Hawk, showing disheveled wing from below. The outer web of P3 is visible, obviously darker than the inner webs of the other flight feathers. Click to enlarge. This bird undoubtedly preened P4 back into place when it landed.]
Posted by Don Freiday at 8:34 AM