Great Birding After the Snow

As to be expected, a number of unusual and out-of-place birds have been found during the past few days following Sunday's blizzard. Highlighting the show has been a Lincoln's Sparrow near the small parking lot at Cape May Point State Park. This bird was found by Chris Vogel yesterday, and continued today. I understand that this/a Lincoln's Sparrow was also seen near the start of the State Park boardwalk on December 16. 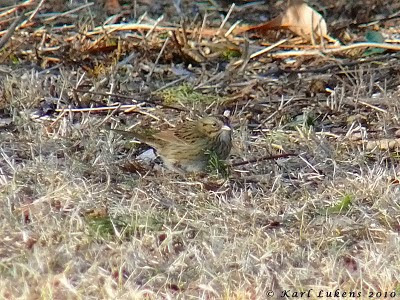 [Lincoln's Sparrow at Cape May Pt. State Park yesterday.
Photo by Karl Lukens; click to enlarge.]
Clay Sutton sent along a note, mentioning a female King Eider in the company of half a dozen Common Eiders at Stone Harbor Point today. Also in the realm of waterfowl, one of yesterday's more notable events was the exodus of Canada Geese trying to escape the snow. It was difficult to look up without seeing a flock of geese overhead at times yesterday afternoon. As an added bonus, a Cackling Goose was among one such flock over Reed's Beach.

Also notable has been the large number of American Pipits throughout the area. Non-snow covered patches of fields, large lawns and beaches are great places to find the species right now. A bunch were on the lawns at Cape May Pt. State Park yesterday, and two even landed in my modest front yard along Reed's Beach Road this afternoon. 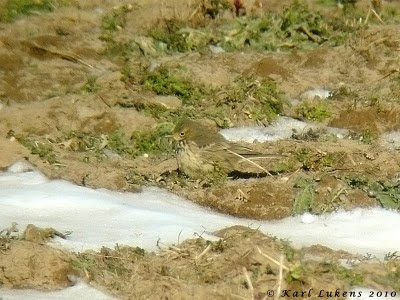 [Look closely and you'll see this American Pipit in the field between Sea Grove Ave and Lighthouse Ave yesterday. Pipits tend to blend into the landscape, but are also pretty vocal. Learning their stacatto, high-pitched call is helpful when trying to locate them. Photo by Karl Lukens; click to enlarge.]
Lastly, as a general note- road conditions continue to improve, but many side streets remain snow covered. Patches of black ice are forming overnight, particularly now that temperatures are rising above freezing during the day. Temperatures will continue to moderate throughout the week, and daily highs will edge toward 50 by Friday. It's a heat wave!

It should be a great weekend for birding in Cape May...hope to see you here.
Posted by Tom Reed at 6:34 PM