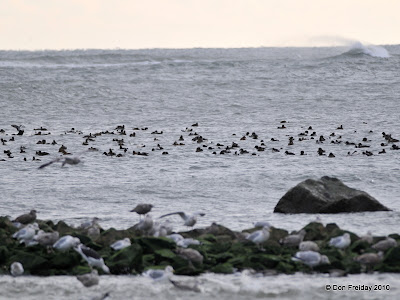 Times have changed. We had an adult Black-legged Kittewake far offshore, and the usual spectacular Harlequins, Purple Sandpipers, Northern Gannets, etc. at Barnegat Light on the CMBO field trip yesterday, but the real story was the Common Eiders. I did an actual count (meaning 1-2-3-4-5-6. . .10; 1-2-3-4-5-6. . . 20; etc.) of the huge flock north of the inlet first, aided by the fact that something made them lift off.  Ready? 280!! But wait, there's more. We got out to the end of the jetty, and around the remains of the old 8th street (south of the main jetty) there were close to 300 MORE!!! And there were more still within Barnegat Inlet - I ebirded 580 Common Eiders, which I think is a new single location high count for NJ.

Slowly I become accustomed to the fact that bird abundance and distribution is in constant flux - it's not a matter of memorizing the range maps and thinking you know where you can find what, forever. Clearly there is a shift underway for eiders. Whether the shift will be long term or not, no one knows, but I think it will be. At least some of this eider shift to NJ is probably related to the maturation of sea life on our "rocky coast" - NJ has no natural rocky coast south of the Palisades, but rock jetties and groins are clearly an acceptable facsimile, from an eider or Harlequin perspective, anyway. Piping Plovers think differently - see Chris Kisiel's article in New Jersey Birds 35 (3) for insights on Piping Plover distribution and "shored" (jettied) inlets.

I understand Ray Duffy extracted an immature male King Eider from the flock at Barnegat - we were not so lucky. We had my favorite conditions for Barnegat, which might help explain the eider concentration. The tide was outgoing and nearly low, and with the new moon and relentless 20 mph west wind pushing water out the door, that meant really low, with shallower water, more rocks exposed, and probably more food available for the eiders, other seaducks, gulls, etc. There were many, many birds of all sorts, a real spectacle. A young Northern Gannet made it all the way in the inlet, past the lighthouse, where it joined the foraging gulls there - gulls that included a few lingering Laughing Gulls. Here's another coastal insight - the bit about strong east winds being best for seabirding is bunk, at least from an NJ perespective. West winds can be just as good or better, and have the added bonus of subduing the waves down close to shore, making viewing easier. 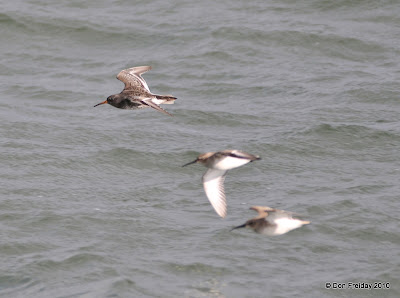 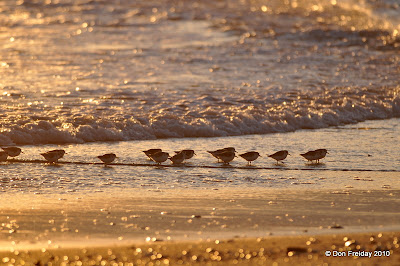 [Day's end Sanderlings at Holgate. A close White-winged Scoter floated offshore, and a Peregrine roosted on the water tower there as darkness fell.]
Posted by Don Freiday at 9:28 AM