A recent post to ID Frontiers (a listserve dedicated to pushing the envelope on bird ID) fortuitously provided a link to a great paper on abnormally-pale plumages in birds. As I had previously written on the subject in regard to Lucy (scroll down a few entries), and as this paper provided more detailed information on the subject, I figured that an update was in order. While the paper is somewhat technical in nature, don't let that scare you off; the gist of the paper is still easily accessible.

Understanding the rest of this essay requires a glossary of sorts.

Different species have differing ratios of eumelanin and phaeomelanin, with some species completely lacking one of them, usually phaeomelanin.

So, as the vast majority of cases of abnormally-pale plumage is created by the lack, or reduction in amount, of melanins, the rest of this essay is restricted to that topic. Except to say that deposition of carotenoids is not all that rare, but many instances are due to deficiencies in diet and are not genetically based. All aspects covered below have a genetic (thus, heritable) basis.

Melanin production occurs in color cells that produce melanins by oxidizing (that is, adding oxygen) the amino acid tyrosine with the enzyme tyrosinase. (Enzymes are always named for the substance on which they act, with the -ase ending tacked on.) The darkness of the color is dependent, and this is critical, upon a combination of 1) the amount of oxidation and 2) the concentration of pigment granules.

Albinism (adjective: albinistic; descriptive noun: albino) is a genetic mutation causing a problem with the manufacture of melanins. The cause of this manufacture problem is due to a lack of tyrosinase. This is a yes-no, on-off problem. An organism is either an albino or it is not. As the paper stated, "partial albinism" is as impossible as is "being 'partially pregnant.'" Albinos lack ALL melanins, but be aware that this lack of tyrosinase has no bearing on the deposition of carotenoids; albinos can still sport color, just not any melanins (check out the various European Goldfinch pictures in the paper). Such organisms have pink soft parts (skin, eyes) because of the strong red color of the blood in those areas. Additionally, albinos have greatly-reduced visual acuity, so mortality rate in the wild is extremely high.

Leucism (adjective leucistic) is a genetic mutation causing a problem with the deposition of melanins. That is, a leucistic organism can manufacture melanins, it simply has problems utilizing them to produce colored body parts. In birds, this mutation is variably expressed, from just a few random feathers lacking melanins to birds with entirely white plumage. Leucistic birds usually have normally colored skin and eyes, though at least some can have pink skin; they always have dark, or normally-colored, eyes.

There are other types of mutation often expressed in birds that have different causes than do albinism and leucism. Like leucism, these individuals have an aberration in deposition of pigments, not in manufacture. Because this is an abnormality of process rather than capability, and because there are two types of melanins (see glossary, above), there is a variety of things that can go wrong, thus a variety of types of diminution of melanin deposition.

Brown, as a an "aberration, is defined as a qualitative reduction of eumelanin." That is, the organism's problem is a deficiency in oxidation, but of eumelanin only. This mutation is recessive and sex-linked, and is the only color "mutation sex-linked in all birds." In bird species that normally have both melanin types (e.g., House Sparrow), this mutation is less obvious than in species normally lacking phaeomelanin (e.g., crows). The physical result of 'brown' is the reduction in eumelanin pigment granules, which also serve as strengthening agents in feathers. Thus 'brown' feathers are more susceptible to bleaching by sunlight. 'Brown' feathers that are normally fully exposed to sunlight while the bird is at rest will quickly bleach toward white, while those 'brown' feathers of which only portions are exposed will have only those exposed portions bleach toward white. As example, I have banded a few individual Downy and Hairy woodpeckers with brown tips to the otherwise black longest primaries. These feather tips are always exposed to sunlight, so they had bleached quite quickly and I now know that those birds might have been 'brown' mutants.

Dilution (dilute plumage) is a quantitative reduction in the deposition of melanins. That is, the problem resides in the concentration of melanins, not in the oxidation thereof. There are two forms of 'dilution.'

Pastel is the dilution of both types of melanins, while Isabel is the dilution of eumelanin only. While dilution in individual birds is variable, it apparently runs around 50%, that is, only half the pigment granules are deposited in the plumage as in a normal individual of the same species/age/sex. Dilute plumage typically bleaches fairly rapidly under sunlight, as in 'brown' plumage, and these two mutations can be difficult to separate in the field.

Ino is a strong qualitative reduction in both types of melanin. Normally-black feathers are very pale brown, nearly white, in 'ino' mutants. In fresh plumage, color and pattern are "vaguely visible;" in old plumage, feathers have usually bleached to white. 'Ino' eyes lack pigments, so are pink. However, they apparently have better eyesight than do 'albinos,' such that adult (abnormally-) white birds with pink eyes are almost certainly 'ino' rather than 'albino.'

Schizochroism is the absence of only one of the two types of melanin, with, obviously, two varieties.

Phaeo birds exhibit a complete loss of eumelanins (sporting only the reddish-brown phaeomelanins), while grey birds have lost all phaeomelanins (sporting only the black/gray and brown eumelanins). Eyes are normally-colored (dark) in these mutants. Obviously, in species that normally lack phaeomelanin, the 'phaeo' condition can be nearly impossible to separate from 100% leucism, though the latter birds should be almost completely white (lacking color entirely).

While many a reader's eyes have probably glazed over at this point, I want to emphasize that this essay is a brief synopsis of pale plumages and the paper cited. I encourage all with an interest in the topic to refer to the paper ("Not every white bird is an albino: sense and nonsense about colour aberrations in birds") to achieve a more-complete understanding of the topic. While it will probably take multiple readings (I'm still trying to figure out some aspects of this), I believe the effort to be worthwhile.

Now, for the re-analysis of Lucy's condition. 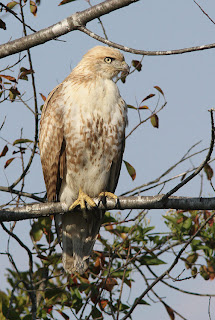 She's obviously not leucistic, as she isn't really white and doesn't sport any all-white feathers that shouldn't be so. What we can see suggests that deposition of eumelanin (the dark melanins), in particular, has been negatively affected. The cause of a reduction in eumelanin might be either qualitative ('brown' or 'ino') or quantitative ('dilute' or 'schizochroism'). We can rule out 'ino' because the bird's color pattern is more than just "vaguely visible" and because she has yellow eyes. I am arbitrarily ruling out 'brown' as an option, because it wouldn't fit my ending to this essay.

If the problem is quantitative, then she could be 'pastel,' 'isabel, 'phaeo,' or 'grey.' Since Red-tailed Hawks have both types of melanin, our analysis hits a sticky point, as any of these might be the cause. However, the paper does state that 'schizochroism' is rare, so I'm fairly happy to go with a dilute plumage of some type. My interpretation of the paper suggests that a 'pastel' might be even paler than this (because both types of melanin are affected), so I think that we should change her name to Isabel!
Posted by Tony Leukering at 1:47 PM