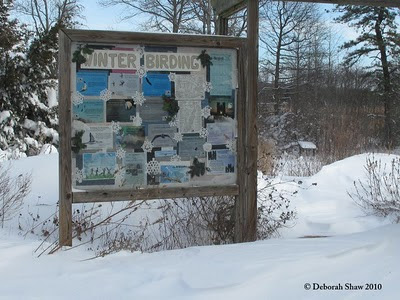 [Winter Birding! CMBO's Center for Research & Education in Goshen this morning.
Photo by Deb Shaw; click to enlarge.]
The entire Cape May peninsula was slapped around by an impressive winter storm yesterday, with snow totals ranging from 12-20". Whiteout conditions occurred for a while last night, and blowing and drifting of snow has resulted in drifts up to five feet high in spots. Roads countywide were closed until this morning, and traveling conditions remain treacherous, especially in the very northern and southern portions of the county. High winds and low wind-chills were the name of the game today, and the latest forecast doesn't bring an end to the gusty conditions until tomorrow night.

So then what, other than the prospect of hibernation, does all this mean for a birder?

Well, a number of things. First of all, as demonstrated during the past few days: watch your feeders! A number of birds that you don't ordinarily see at your feeding station might suddenly appear after a big snowfall. Case in point: a single Swamp Sparrow joined the dozen or so White-throated Sparrows under my feeders this morning, while a Northern Mockingbird was battling a trio of Blue Jays for the rights to the millet I scattered along the adjacent hedgerow. A heated birdbath would also be a valuable item to possess right now.

Second, if you're brave enough to head outdoors, make an effort to work grassy roadsides that have been cleared of snow. This is where many birds will accumulate to feed, including American Woodcock, Fox Sparrow and various other passerines. Bare patches of fields might reveal American Pipits, Horned Larks and who knows what else. The biggest advantage is that you can bird right from your car- just do so safely!

Third, massive storms such as this one always have the potential to bring in some unusual birds. Satellite imagery this morning revealed an apparent "eye" within our storm as it moved along the upper northeast coast. Wind gusts in excess of 70mph ripped along the Massachusetts coastline and pressure readings dropped to levels usually associated with a category 2 or 3 hurricane. I won't toss up any rarity suggestions in fear of jinxing it, but birders should keep a very close eye on their local patches during the next few days. 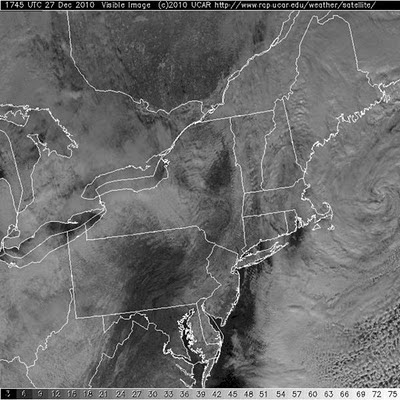 [Satellite view of the storm as it moved up the Northeast coast this morning.
Image courtesy of NBC 40 Weather's twitter page.]
Lastly, this weather system might help facilitate a southward push of several northern species. Rough-legged Hawk comes to mind, as does Common Redpoll, which was already making a significant push into the northeast even before snowpocalypse hit. It also wouldn't be surprising to see a sudden arrival of American Tree Sparrows by week's end.

Regardless, the most important thing you can do right now is ensure an adequate food and water source for your backyard birds, as they'll be needing it. If you do venture out for some post-storm birding, please play it smart: drive extremely carefully and dress warmly. Good luck, have fun and enjoy the snow! 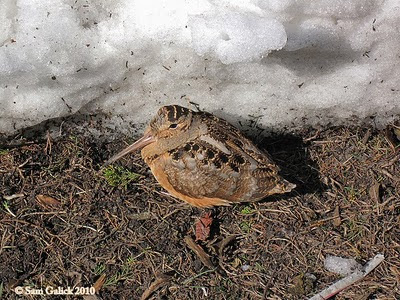 [Scenes like the one above should be fairly widespread around Cape May
during the next few days. American Woodcock, Cape May Point,
February 2010. Photo by Sam Galick; click to enlarge.]
Posted by Tom Reed at 3:40 PM