2 October -- an excellent flight in the morning 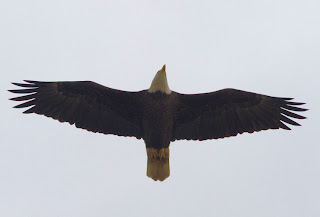 [This adult Bald Eagle made a low pass directly over the Hawkwatch platform shortly after 10 am on 2 October. Though numbers of Bald Eagles are so high as to be an everyday occurrence here, such birds -- particularly adults -- only rarely fly so close to the hordes of eagle oglers. All photos were taken from the Hawkwatch platform on 2 October and are copyright Tony Leukering; click on image{s) to see larger version(s).]

Tom Johnson has already noted a few bits from an interesting and exciting 2 October morning, but I thought that I'd add a few more details.

The sheer variety going past the Hawkwatch in the first few hours of the day was incredible, with a goodly variety of warbler species (e.g., Cape May, Pine, Black-throated Blue, Northern Parula, and 6 Yellows -- late for such a large number), the first big Northern Flicker flight of the season, a juvenile Red-headed Woodpecker, a White-rumped Sandpiper amongst a large-for-this-late-in-the-season flight of Semipalmated Sandpipers, a large-for-this-late-in-the-season flight of Bobolinks, falcons and accipiters everywhere, four species of swallows (Tree, Bank, Barn, Cliff), a few flocks of Cedar Waxwings, a few Rose-breasted Grosbeaks, a Baltimore Oriole, and even a few Broad-winged Hawks. In fact, warblers were still coming off the ocean well into the afternoon.

However, the best show -- or, at least, the one varying most from normal -- was put on by herons. At least nine flocks of Black-crowned Night-Herons totalling some 170 individuals passed by. But the mixed Great Blue Heron-Great Egret flock (56 and 8) that picked up in late morning to the north of the Hawkwatch and proceeded across Delaware Bay took the Oscar for Best Heron Performance.

Late-morning rain slowed the flight down, but there were interesting occurrences all the way through the afternoon; enough so to keep some of the regulars pinned to the platform until the bitter end. Those that stayed got to be amazed by the most exhilarating act of the day, when an adult male Peregrine Falcon took a cue from all of the Merlins. It came speeding in, just like a Merlin, but in a much-higher gear, from the vicinity of the lighthouse into the Tree Swallow swarm at the back side of Bunker Pond. It made a couple swirling stabs at Tree Swallows, then, seemingly effortlessly, nabbed one from near the water's surface and carried it back past the stunned crowd. 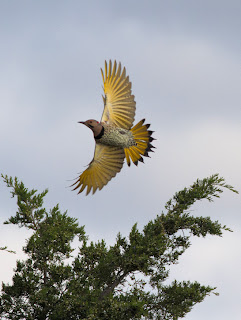 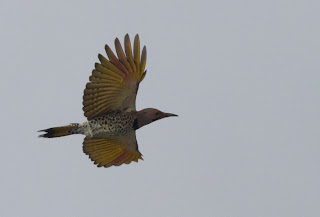 [The flight of Northern Flickers past the Hawkwatch numbered greater than 300 and included these two obliging individuals. Note on the lower bird that the 6th and 7th primaries (count inward from number 10, but don't count that really short feather, as that's the alula) are salmon-colored. I believe that the color is due simply to some odd availability of pigments at the time the feathers were growing, rather than the result of gene introgression from Red-shafted forms of Northern Flicker.] 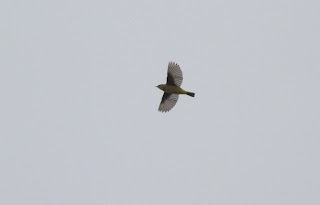 [Though the original image was tiny, we can still see the diagnostic yellow vent and tail pattern of the western subspecies of Palm Warbler in the picture (the eastern form, Yellow Palm Warbler, is entirely yellow below). Palm Warblers are now very numerous in their favorite local habitat: the dunes.] 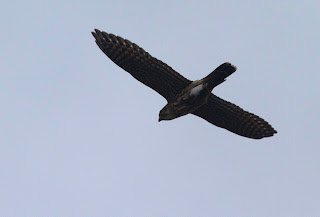 [Late in the afternoon, Merlins were more interested in an early dinner than in migrating, as we noted three consecutive Merlins coming off the water with some hapless victim. Though the jury is still out on this bird's meal, I believe that it is a Tree Swallow, one of hundreds swarming the Point this day.] 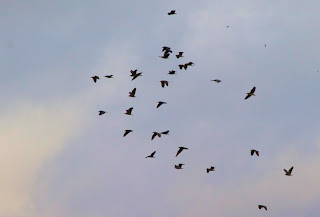 [29 of a flock of 46 Black-crowned Night-Herons lumbering their way toward the Bayshore and points south. Note the other, smaller, birds in the picture; I think that they're Tree Swallows, but....]

[Part of the flock of 56 Great Blue Herons and eight Great Egrets heading out.]
Posted by Tony Leukering at 8:51 AM