Now and again - honestly, it's only now and again! - I complain just a little about being stuck in the office while the world and his wife appear to be out and about and enjoying all the great birds that Cape May has to offer. Well, today I think I probably lost any sympathy that my whining may attract, since the Northwood Center seemed to have great luck stowed upon it - and most specifically, my office window!!

The day had started well with a Connecticut Warbler, two Cape May Warblers and two Blue-headed Vireos in our yard, along with a good assortment of other birds - but there was work to be done in the office. Settling down to a plethora of emails my attention was drawn to a small group of shrubby trees just outside my window - the distraction had begun! A Sassafras, a small American Holly and a barely-worthy-of-the-name-'tree' Hackberry were attracting birds with, at one point, seven birds present and all of different species! This continued throughout the day, but the skies above produced the goods too. As shapes began to circle overhead, it soon became apparent that a good raptor flight was taking place and it wasn't long before a text message from Doug Gochfeld had me dashing out the door and trailing customers along with me. A Golden Eagle had been seen from the Hawkwatch - chances are it might come our way. Well, it took a few minutes, but the eagle duly appeared; in fact, it appeared alongside a juvenile Bald Eagle and mixed in with a wonderful mix of other raptors. At one point it was mobbed by a young Northern Harrier while seemingly endless numbers of Cooper's and Sharp-shinned Hawks spun past, accompanied by Black and Turkey Vultures, Peregrines and Red-tailed and Broad-winged Hawks. 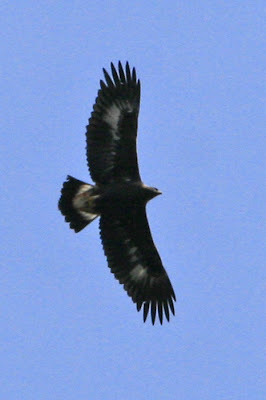 A juvenile Golden Eagle with all that white in the wings and tail is a fine sight at any time, but all the more so when you just have to step out of the door to appreciate it! This bird spent nearly 15 minutes circling within sight of the Northwood Center today - and often directly overhead! [photo by Mike Crewe]
And what of the birds from the window? Well here's a few shots I got today. Oh yes, didn't I mention it? I keep a 400mm lens on the desk - just in case!! 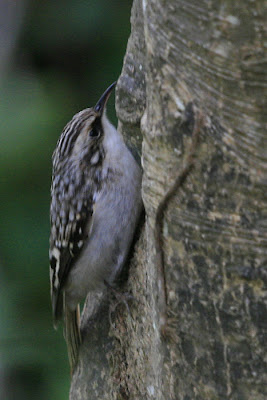 Not the sharpest of shots, but they do like the darkest of spots! This Brown Creeper checked out the holly trunk for a few minutes and gave me a chance to appreciate just how frosty they are compared with European Treecreepers [photo by Mike Crewe]. 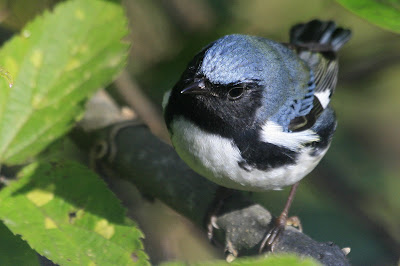 This male Black-throated Blue Warbler spent all day catching insects within sight of my office window - how am I ever supposed to get any work done?! [Photo by Mike Crewe] 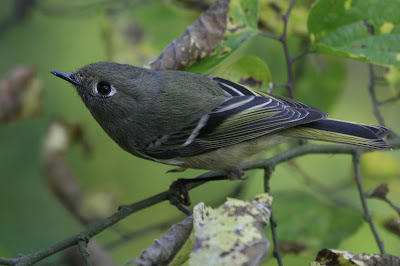 Ever-active, getting a Ruby-crowned Kinglet to stop even for a second can often seem impossible. This little guy hover-gleaned for insects for hours in the tiny hackberry and must have left no leaf unchecked [photo by Mike Crewe.] 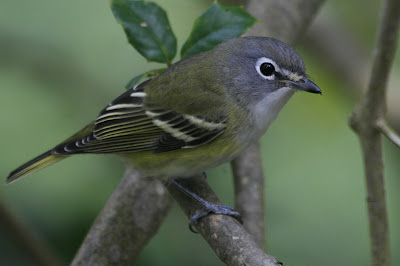 Third of the day! This snazzy Blue-headed Vireo chose the holly to spend its time and knocked off several small moths in the late afternoon [photo by Mike Crewe]. 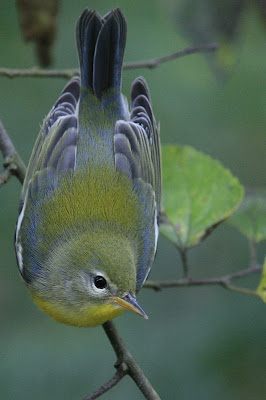 The hackberry comes up trumps again! Several Northern Parulas contorted themselves as they searched for insects during the course of the day. These hyperactive little warblers never cease to amaze me with the positions they get themselves into, yet still maintain their balance - and a grip on the branch! [Photo by Mike Crewe]
Well, that's just a few of the birds that paraded before me today and made all that paperwork that little bit more bearable! Elsewhere over the past couple of days, birds have continued to trickle through nicely, despite the variable and often windy weather. Some interesting reports from backyards in the county have included Mourning Warbler, Scarlet Tanager and Orange-crowned Warbler as well as an as-yet-unidentifed-to-species Selasphorus hummingbird. Two American Avocets continue on the mudflats near Nummy's Island, mostly being reported from near the toll bridge at the south end of the island. An Ash-throated Flycatcher reported from Cox Hall Creek WMA yesterday was still present today.

At the Seawatch, Tom Reed reported his first of season Horned Grebe on 16th as well as a nice surprise in the shape of a Red-headed Woodpecker. Horned Grebes and Common Loons featured on both The Skimmer and The Osprey boat trips during their journeys out to see the Brown Booby - which seems to be getting on like a house on fire with the local Double-crested Cormorants now! 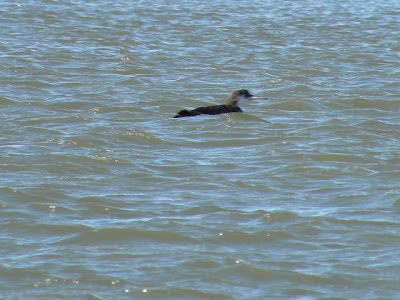 Common Loon from The Skimmer [photo by Ginny Powell]. 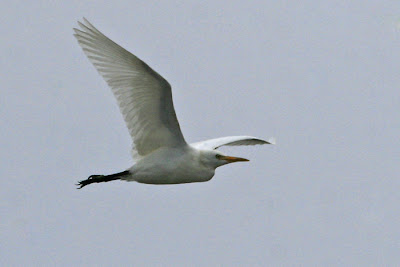 Cattle Egrets are pretty uncommon at Cape May this time of year so it's surprising that this bird went almost unreported, despite spending several days in the area (here seen flying across the state park parking lot on October 12th [photo by Mike Crewe].
Reed Spraying
Sharp eyes may have spotted that reed spraying hasn't taken place at The Meadows or the state park yet this Fall. The weather has been too windy for the past couple of weeks, but the last I heard was that they were going to try again this week. Both sites are likely to remain open now that the spraying is more localized, but please do be prepared to take on-site directions from staff if spraying is in progress during your visit.
Posted by Mike Crewe at 10:17 PM