It was a funny old day today and one where you either hit the right place - or you didn't. The Morning Flight count at Higbee Dike seemed to be a bit so-so by all accounts, leaving Tom Johnson with time to head out to the backbays on a very full high tide and report good numbers of salt sparrows (ie Seaside/ Saltmarsh/ Nelson's - delete as necessary!). Tom sadly also found a dead Northern Saw-whet Owl on Avalon Boulevard, presumably hit by a car during the night. A couple of recent reports of fly-by Short-eared Owls suggest that owl time is upon us. In contrast to the dike count, my walk at Hidden Valley this morning scored an amazing total of 90 Eastern Meadowlarks, with a biggest single-flock count of 48. This is far and away the biggest count I have had of this rapidly declining species in Cape May over the last couple of years and more reminiscent of the 'good old days' when there was more grassland in the eastern US.

At lunchtime today I made it as far as the South Cape May Meadows for the first time in many months and found plenty of Swamp and Savannah Sparrows and a nice range of ducks to enjoy. Offshore, at least 14 Parasitic Jaegers were harassing terns with some of them coming in quite close to shore, including a wonderful 'golden-headed' juvenile with blond hair like a Golden Eagle! Northern Gannets are present in good numbers in The Rips and Surf and Black Scoters are piling into the bay now. Here's some pictures from the last couple of days (all photos by Mike Crewe): 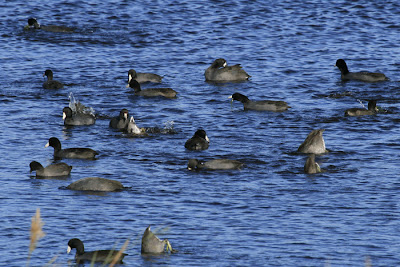 American Coots continue to increase at the point with probably over 200 now, scattered around the state park and meadows ponds. This is a good number for here, but what does it suggest? A good breeding season, or sign of bad weather further north? 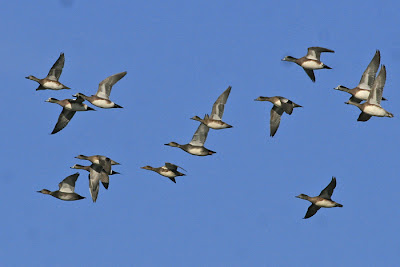 American Wigeon and Gadwall flying off Bunker Pond. Checking the axillaries in the 'armpits' of the wigeon is a good way to look for Eurasian Wigeon - which has gray not white axillaries. 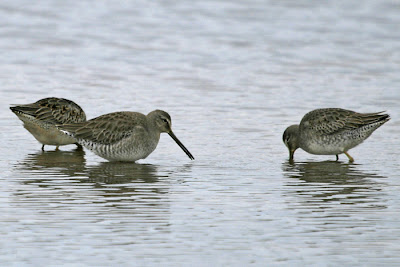 Michael O'Brien reported four Long-billed Dowitchers from the South Cape May Meadows yesterday and they were still there today (one of them is off to the left and wouldn't fit in the photo!). Long-bills tend to favor freshwater ponds over tidal saltflats and are far less common here in Cape May than Short-bills. 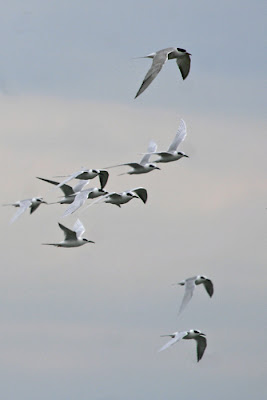 Tern numbers have dwindled considerably since the heady days of August and early September, but there's still a few hundred Forster's Terns out there with their little black 'bandit masks'. Note the gray-winged Common Tern at the top - there was still two of these hanging out on the beach today. 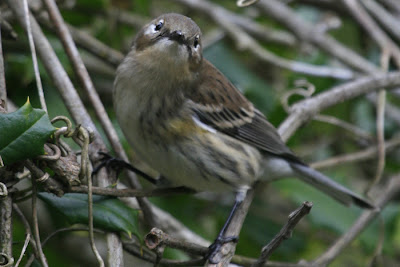 Lest we forget - yes, Yellow-rumped Warblers are massing all over the place still, but this one caught my eye for some reason. When it turned its head I realised why... 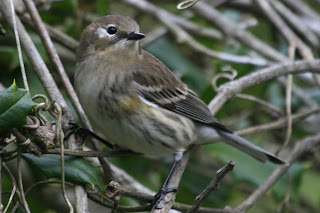 It had these strange white patches on both sides of its face! That's one way to stand out in the crowd I guess!!
Elsewhere today, there's been reports on and off lately of a Selasphorus hummingbird at our Goshen Center and Vince Elia reports that it is still present as I write. We assume this is either an Allen's or a Rufous, or maybe even a Broad-tailed Hummer. Juveniles of these three are notoriously difficult to identify and an out-of-range bird often even more so. The Seawatch continues to turn up interesting counts daily now, with today producing 80 Purple Sandpipers last time I heard, while some nice counts of Wood Ducks passing offshore with scoter are always interesting to ponder on - perhaps they've learnt that it's better than being shot!!

STOP PRESS - Before I even finish the post, I hear that the hummingbird at Goshen is identifiable as a Rufous Hummingbird. A nice bonus for the Autumn Weekend Birding Festival if it hangs around!
Posted by Mike Crewe at 5:22 PM