Of Warblers, Hawks and Other Feathered Things

It's been one of those great, Cape May, late October days today - and it looks set to be similar tomorrow, so I suggest you all beat a hasty path in our direction! Our Higbee's Beach walk this morning turned up a surprising number of Blackpoll Warblers - we even enjoyed seven in a single tree at one point! I reckon we had seen a good 35 to 40 Blackpolls by the end of the two hours, as well as the expected mass of Yellow-rumped Warblers and even two Nashville Warblers. But where are the sparrows? They are certainly in short supply at the moment but maybe tomorrow will be the day - or maybe next weekend...

I had to drop by the Rea Farm on the way to the office and chanced across another Nashville Warbler that Mike Fritz had just spotted and I did note the odd Swamp and Savannah Sparrow there too. Down at the Hawkwatch, they seemed to have a heck of a day today, with Merlins and American Kestrels roaring past at point blank range, Sharp-shinned Hawks spiralling way up high and an impressive run of Bald Eagles. When I was there at lunchtime, seven Bald Eagles were in view together - even the diehards were impressed!! A little after 2PM, we were all alerted to a dark morph Swainson's Hawk by Michael O'Brien - heading over his house of course! The bird soon came into view from the Hawkwatch and then made an impressive low fly-by at the Northwood Center. That's my kind of bird! 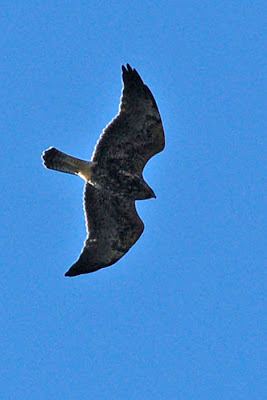 Swainson's Hawk over Stevens Street [photo by Clay Sutton].
Also notable today was the impressive passage of Chimney Swifts, given the late time of year. I saw at least 15 during the course of the day and I am sure that those who spent more time out there will have notched up a higher number than that. Tom Reed recorded the first Purple Sandpiper of the season at the Avalon Seawatch and a smattering of shorebirds passed through the point, with Pectoral Sandpipers making it into double figures. The two female-type Eurasian Wigeons continue on the state park ponds.

If you can't make this weekend, I'll see you next weekend - because it's our Autumn Weekend Festival with all the fun and great birding that is always associated with that event and I can't believe anyone would want to miss it!! And if you are in the area, we have just two places left on Louise Zemaitis's awesome, three-day 'Cape May With Everything On It' workshop - the very best way to be treated to the cream of North American birding in Fall!
Posted by Mike Crewe at 4:40 PM