Well the dust hasn't settled in the parking lots, but general agreement appears to have been settled upon - it was another great Autumn Weekend here at Cape May; I dread to think just how many photos were taken over the past three days, and just how long it's going to take for all those bird pictures to be catalogued and filed away! As forecast, Saturday turned out to be a pretty dreadful day weather-wise but, to be honest, it could have been worse - we certainly didn't get the foot and a half of snow that some places in North Jersey got! Some localized flooding from astronomically high tides affected the barrier islands and a few roads had to be closed for a while, but somehow our Autumn Weekend kept going. Yes, the boat trips had to be cancelled, but it was impressive the way the weekend participants soldiered on and I particularly liked the way that a variety of impromptu seawatches seemed to spring up anywhere that there was places to stand out of the wind and rain. Also worthy of high commendation was the way that our volunteer leaders turned up in such dreadful conditions, just in case there was anyone wanting a walk - thanks guys!

My Saturday was rather strange as it started with me singularly failing to find my waterproofs and having to travel to good old Walmart for another set! But it was well worth as Saturday proved to be a great day for birds. Early morning walks that did go ahead produced an interesting array of sparrows (presumably mostly hangovers from the day before), while the Cape May Point walk produced the bizarre site of a shearwater which did a turn high over the state park before disappearing back out into the bay... At Cape May Airport, shorebirds escaping the flooded coastline included sone 200 or so Black-bellied Plover and a few Dunlin. The seawatch at the Grand Hotel (5th floor, great view!) produced a couple of Common Eider and the season's first Snow Bunting was reported from Brigantine. My own seawatching experience took place at Sunset Beach with my wife and refugees from the rained out Beanery and Meadows walks. We managed three Horned Grebes, two Parasitic Jaegers, four Red-throated Loons, a male Long-tailed Duck, two Bonaparte's Gulls and plenty of Northern Gannets and Royal Terns. At least three Great Blue Herons slowly beat their way back in off the bay against the rain and two American Pipits were feeding on the tideline.

Indoor events were understandably popular in such stormy conditions - but surely would have been popular in their own right; Kevin Karlson, Michael O'Brien, Pete Dunne, John Kricher, Ted Floyd, Kenn Kaufman - an amazing team of speakers with a wealth of knowledge, humor and insight to impart.

Sunday was certainly a release for us outdoor types as we headed back out for the final day of events. After a day of stormy conditions, birds were hungry and eager to be out feeding. Sparrows were very much the order of the day at most locations and great waves of birds scurried for cover in front of appreciative groups. Kenn Kaufman's group at The Beanery enjoyed a very late Orchard Oriole and the same site also produced Cattle Egret, Golden Eagle, up to three Bald Eagles, two Vesper Sparrows, Yellow-breasted Chat and Tennessee and Black-and-white Warblers. A Yellow-billed Cuckoo was still at Higbee's Beach and at least three Baltimore Orioles, various fly-over Rusty Blackbirds and oodles of both Ruby-crowned and Golden-crowned Kinglets were around - many at amazingly close range. The Rufous Hummingbird at Goshen was joined by a Ruby-throated and the afternoon's Stone Harbor walk produced a Black-throated Green Warbler along with a nice range of shorebirds. A Glossy Ibis at the South Cape May Meadows was followed by reports of a very obliging American Bittern and at least two approachable Vesper Sparrows. Events at the end of the day were to make the meadows the place to be as Kathy and Roger Horn spotted a Black Rail from the viewing platform (Will Kerling had flushed one earlier in the day during a butterfly survey walk at the Plover Ponds which may well have been a different bird). As the masses gathered, all that could be found was a Sora, but those who stayed until dusk were rewarded with a Black Rail calling, along with no less than 21 American Bitterns and two Short-eared Owls leaving the marsh to head south!

Boat trips on The Osprey resumed today and highlights from there included the Brown Booby (yes, it really is still here!), Brown Pelican, Common Loon, Horned Grebe, Bufflehead, Tricolored Heron and a Short-eared Owl. What more can a say? An amazing weekend and, as always, you had to be here to be part of it. Start planning for next year now folks!!! 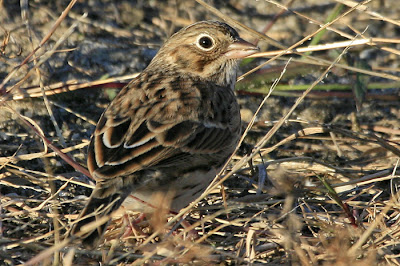 I was busy all day with guided walks today, but in celebration of a great weekend for sparrows, I offer up this Vesper Sparrow, one of two showing well at the South Cape May Meadows. Telling them apart can be tricky, but the sparrows have a subtle charm all of there own and many are really quite beautiful once seen well [photo by Mike Crewe].
Posted by Mike Crewe at 10:49 PM