Copious amounts of dust are finally settling around us all at the bird observatory as we recover from another great Autumn of birds and birding, and we catch up on ceaseless emails and all those other everyday items that were put on temporary hold. After the hideous Nor'easter of last Saturday, the weather has been pretty gentle on us here at Cape May, though our New Jersey Audubon headquarters up in Bernardsville is still without utilities, so please do bear with us if you experience communication difficulties. With a steady north-east flow of cold air and some ground frosts in the area, we are experiencing birds shipping out in good numbers at the moment. Typical birds of the season showing up now include Orange-crowned Warblers (ever-elusive!), Golden-crowned Kinglets and Vesper, Lincoln's and Nelson's Sparrows along with large numbers of other sparrow species and Yellow-rumped Warblers. One or two Common Eiders are appearing with the scoter flocks and Golden Eagles are brightening up the hawkwatch counts. A scattering of Baltimore Orioles and Yellow-breasted Chats lurk in Porcelainberry tangles and there was a report of a possible Sedge Wren in the state park on November 1st, though I have no further details of that bird. An individual of the distinctive Gambel's form of White-crowned Sparrow was at the Hawkwatch on November 1st and a White-winged Dove put in a brief appearance there on 2nd. This may well be the same bird that was seen briefly on October 28th, so it's worth keeping an eye out around the point. Two female (apparently from their behavior!) Eurasian Wigeons continue on Bunker Pond and the Rufous Hummingbird was still present at Goshen on November 1st but I've had no reports as yet since. Finally for now, a couple of Red-breasted Nuthatches put in an appearance by the Hawkwatch Platform on Wednesday, reminding us that they have been very obvious by their absence so far this season. 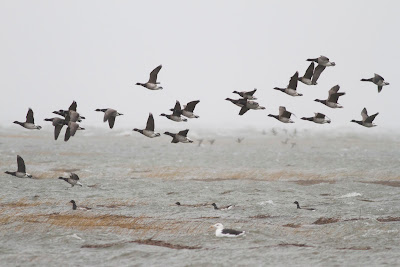 Flashing back to the storm on Saturday, October 29th, I think that this picture from Sam Galick sums the day up! Believe it or not, this is Nummy's Island on an astronomically high tide - no island, just swimming Brant and a Great Black-backed Gull! 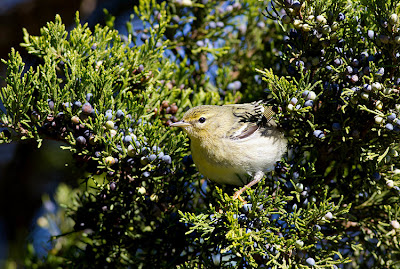 Blackpoll Warblers have been a real feature of the late October period at Cape May this year with good numbers noted daily for some time now. Many birds have been observed eating Porcelainberry or - as here - Virginia Juniper (Eastern Red Cedar if you prefer!) berries and it is this ability to switch from insects to fruit that enables certain warbler species to leave their southward migration until a little later than some other species are able to do. [Photo by Tony Leukering] 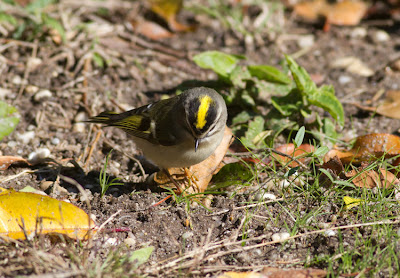 The king is crowned! Golden-crowned Kinglets are now calling from evergreen patches all over Cape May Point. This picture from Tony Leukering does a nice job in showing that wonderful, yellow head stripe. 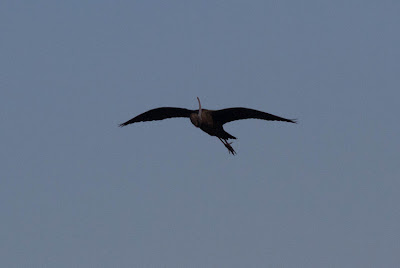 Tony Leukering has a habit of capturing the unusual with his camera! Here, a passing ibis is doing a peculiar head rub against his neck whilst in flight - see if you can do it, it's not easy! 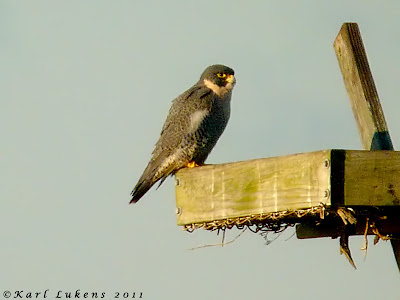 The Osprey nesting platform near the beach at the South Cape May Meadows has never yet been favored for its intended purpose, but raptors use it as a look out perch frequently - as here with this passing Peregrine during one of our Meadows walks. 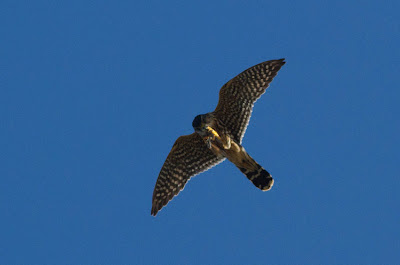 Merlins continue to pass the Hawkwatch in fair numbers, and some are even managing to find a few straggling Green Darners to tuck into. [Photo by Tony Leukering] 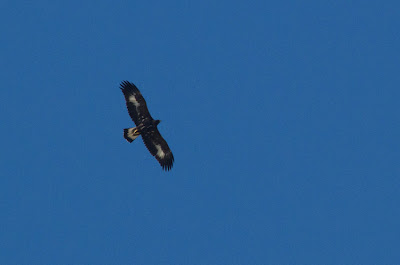 Late October and - especially - November are prime times to look for Golden Eagles at Cape May. When they are youngsters with this amount of white at the base of the primaries, identifying them is not too hard [photo by Tony Leukering]. 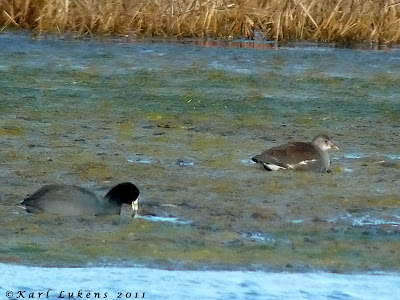 Rail duet: coots and moorhens differ from most other members of the rail family in being primarily birds that spend a lot of time swimming, rather than lurking in thick vegetation. American Moorhen (right) remains a scarce but regular stray this far north and most birds are youngsters with a poorly-defined white flank streak and pale faces. 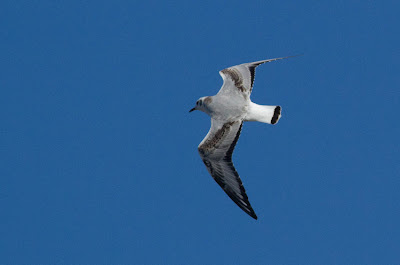 A sure sign of winter on the horizon - a trickle of Bonaparte's Gulls has been witessed around the point this past week so keep an eye along the tideline anywhere along the beaches. [Photo by Tony Leukering] 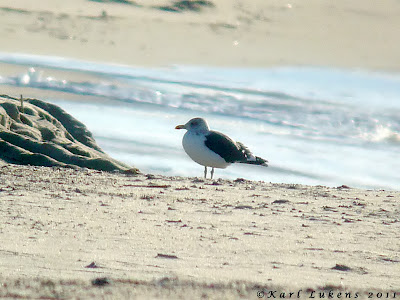 Ever present at the ponit these days it seems, Lesser Black-backed Gulls still linger in ones and twos but will most likely have shipped south by the end of this month. [Photo by Karl Lukens] 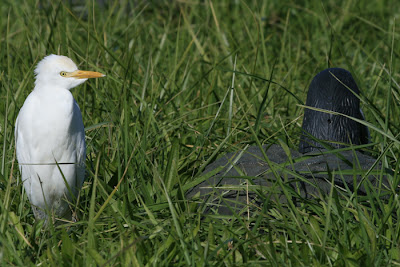 A friend in need... The Cattle Egret continues to hang out at The Beanery and now has to settle for sharing time with the only other birds that like the grassy meadows there - the local gun club's plastic decoy geese!! [Photo by Mike Crewe] 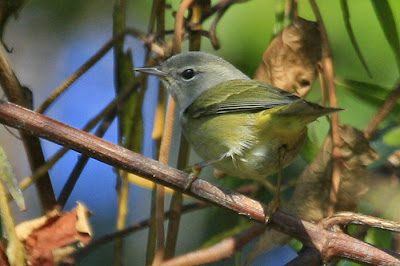 Perhaps the most elusive of the regular warblers at Cape May is Orange-crowned Warbler. Even if one is located, it seems to be unusual for it to still be around once other birders arrive on the scene! This bird spent several days in a hedgeline at The Beanery but was never easy to watch, often flitting from hedge to weeds to trees then off across the field and being lost until mysteriously reappearing back where you last saw it again! [Photo by Mike Crewe] 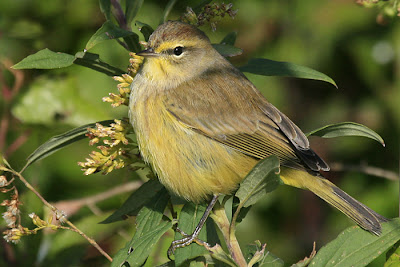 A good sign that the season is fast drawing on is when you suddenly realize that all the Palm Warblers you are seeing are yellow on all the underparts and are thus of the easterm form hypochrysea. These birds are plentiful here at present and spend a fair amount of time feeding on the ground in fields and dunes. [Photo by Mike Crewe]
Posted by Mike Crewe at 3:24 PM