Some Recent Bits and Pieces

As the season rolls on, the text messages thin out, but there's still plenty to keep us occupied with here. The weekend saw the three Eurasian Collared Doves on Lincoln Avenue finally behaving themselves and, though they have been here for several months now, I reckon this was the first weekend when they could actually be called 'easy to find'! This is the first time that this species has stayed for such a protracted length of time at Cape May and (provided they're not all boys or all girls!) it must surely be time to speculate on whether they will stay here and breed now. Perhaps the answer will lie in the weather we get over the winter period. To me, it is certainly interesting that I have not heard a single territorial call out of any of them yet. Along with the collared doves, a White-winged Dove appeared on Saturday too and hung out for most of the day on the corner of Lehigh and Lincoln Avenues. This may be the bird that was on Seagrove Avenue recently, but it appears to now have a chest injury of some sort. 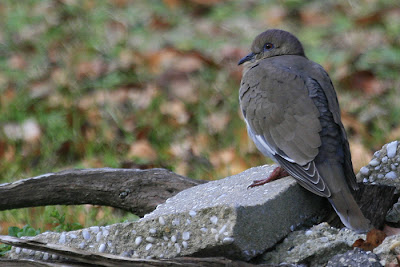 White-winged Dove at Cape May Point on Saturday, looking a little under the weather [photo by Mike Crewe]. 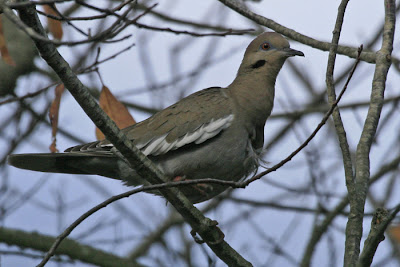 Close scrutiny of the White-winged Dove revealed an open injury on its chest (just  visible here) [photo by Mike Crewe].
The young male Redhead continued on Lighthouse Pond over the weekend and a female and two male Eurasian Wigeons were also present there. The Ash-throated Flycatcher at Cape Island Preserve continued to at least 26th and the same day saw another one found by Pat Sutton at Woodcock Lane. This location is a nice, walkable section of the Cape May National Wildlife Refuge and is situated on Rte 47 at the small settlement of Dias Creek. Staying with flycatchers, a Western Kingbird was found on 26th at Exit 13 on the Parkway - that's the turn off for Avalon. 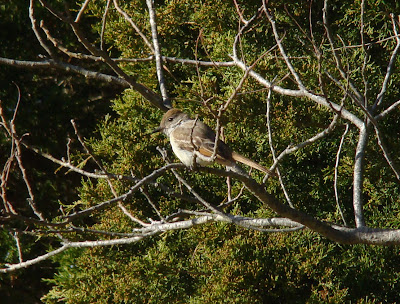 Ash-throated Flycatcher at Woodcock Lane on the Cape May National Wildlife Refuge [photo by Pat Sutton].
Stone Harbor Point continues to hold good numbers of Snow Buntings, though as ever they can be elusive. Kevin Karlson reported 80 there on 26th, along with two Short-eared Owls. Late news broke of a Northern Shrike photographed at Thompson's Beach on 27th, while the Avalon Seawatch continues to produce some wonderful birding experiences with another two Black-legged Kittiwakes in the mix this morning and Northern Gannets in large numbers. For me, an interesting sign of the times was that I saw 24 gulls on the South Cape May beach on Saturday and three of them were Lesser Black-backs - a remarkable percentage! 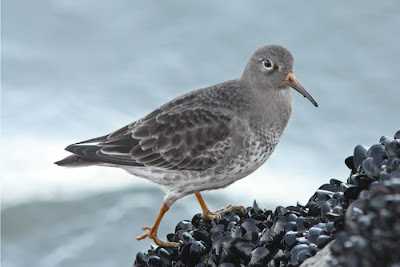 Purple Sandpipers are arriving on Cape May's stone jetties right now - this one was at Avalon at the weekend [photo by Beth Polvino].
As the autumn hawkwatch season starts to wind right down now, spare a thought for Melissa, doggedly sitting it out until the end of the month to round off this year's figures. But there's still a few raptors out there, as these wonderful photos show - and which I felt deserved a wider audience, in celebration of Cape May's spectacular annual raptor passage: 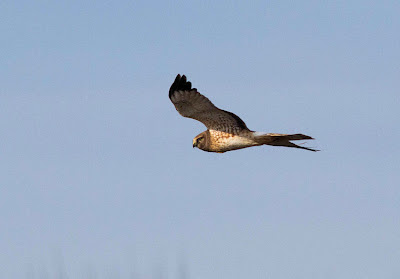 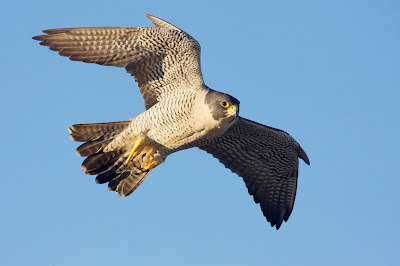 The Peregrine serves as a logo for Cape May Bird Observatory for a reason; this species is a common autumn migrant through here, having recovered spectacularly from the bad old days of DDT, they are awesome to watch and truly magnificent to watch. And when you get a close encounter like this... 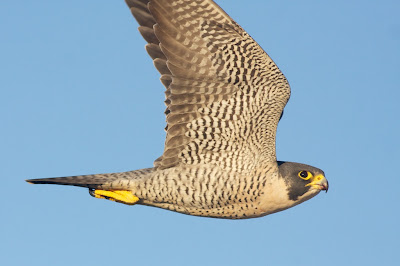 ... well, what else is there to say!! [Both Peregrine photos copyright Tom Johnson]
Posted by Mike Crewe at 12:27 PM