Cape May Hot and Cold!

It's been a strange few days since my last post here at Cape May; Wednesday saw a wonderfully calm and warm, sunny day with temperatures reaching 70F, while today (Friday) the trees are thrashing around in a pretty chilly north-west wind and it's really not that pleasant out there! Wednesday's warm weather was perhaps best demonstrated by Will Kerling who managed to find 11 species of butterfly around Cape May Point that day - here's his list: American Snout, White-M Hairstreak, Common Buckeye, Monarch, Sachem, Fiery Skipper, American Lady, Red Admiral, Questionmark, Small White, Orange Sulphur. The first two are particularly remarkable, especially the snout, which one would not normally expect to see here past August or early September, yet this was a fresh individual. In addition to the butterflies, Will has been finding late dragonflies and damselflies in the area, with his November list so far including Green Darner, Carolina Saddlebags (I have heard of a Black Saddlebags from Melissa Roach too), Yellow-legged Meadowhawk (Jimmy Dowdell also reported a Blue-faced Meadowhawk to me), Citrine Forktail, Rambur's Forktail and Familiar Bluet. While the larger dragonflies will be southbound migrants, the smaller damsels probably hang on as long as they can until a particularly nasty frost finishes off either them or their food supply (and thus them indirectly!). 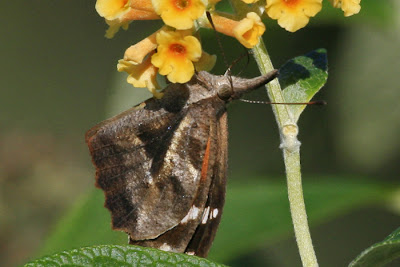 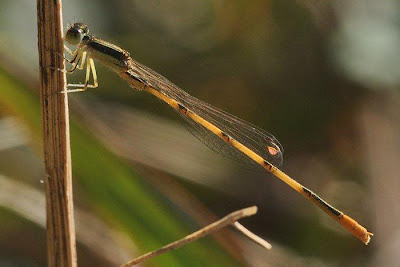 Citrine Forktail at Cape May Point on November 2nd - another individual was seen on November 3rd [photo by Will Kerling]. 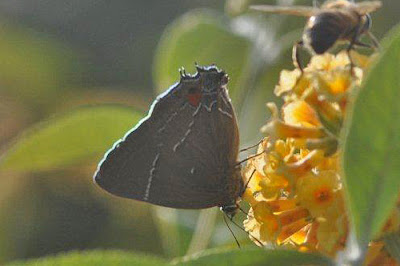 A very fresh-looking White-M Hairstreak on Lighthouse Avenue on November 9th [photo by Will Kerling]. 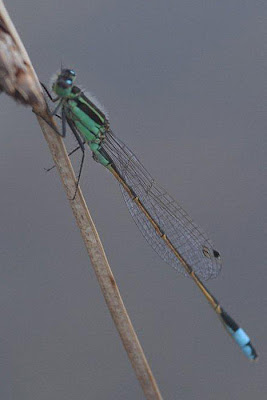 Male Rambur's Forktail at Cape May Point on November 9th [photo by Will Kerling].
And so to the birds of the last few days; several 'stayers' continue to be reported including at least three of the Eurasian Collared Doves around the general area of the eastern end of Lincoln Avenue, the White-winged Dove on Seagrove Avenue (though not reported today) and a surprising number of Blackpoll Warblers - I saw three today without trying! American Coots remain in three-figure numbers around the ponit and several reports of small groups of Tundra Swans filtered through today. Up to three American Moorhens have been reported on and off at the state park since 7th and American Bitterns continue to show really well on occasion - including one that we saw swimming on one of the open channels on our Wednesday morning walk!

The Rufous Hummingbird continued at least until 10th at Goshen and an as yet unidentified Selasphorus hummingbird was reported on New England Road, just south of the canal on 10th and was still present today.  One of the hottest reports of the week came from Jimmy Dowdell, who found a Sedge Wren that stayed for at least November 9th and 10th at the south end of the west field at Hidden Valley, off New England Road. There was also an American Tree Sparrow there on 9th. A good movement of Ring-billed Gulls off the Seawatch at Avalon produced a report of a California Gull heading south - now there's something to look for tomorrow! Tom Reed also added an adult Little Gull heading south with Bonaparte's Gull at the same location. Finally, nice to see that Higbee's Beach was being checked this late in the season, with Bob Brown reporting a male Black-throated Blue Warbler as well as a good-sized feeding flock of American Pipits in the Rye that has been sown in the first field.

Plenty of birds around to be found and, with a Snowy Owl now lurking up in Warren County in North Jersey, who knows what might pop up this weekend - get out and enjoy it!
Posted by Mike Crewe at 5:35 PM