Well, Thanksgiving Day and Black Friday gave us some nice birds to be thankful for, the highlight of which was undoubtedly the very obliging Le Conte's Sparrow - though sadly it appears to have been a one-day wonder. For me personally, Thanksgiving Day also gave me my 160th bird species fror my yard list - an Orange-crowned Warbler, which hung around long enough for photos! It seems to have been a good autumn for the latter species, with occasional reports from a number of sites over the past several weeks. If you are still looking for one, I would suggest checking weedy field edges where there is plenty of seeding goldenrod or Frost Aster; regular sites lately have been Cape May Point State Park, Cox Hall Creek WMA and Cape Island Preserve, but there is plenty of suitable habitat elsewhere too. 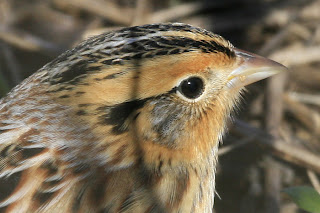 Le Conte's Sparrow at Higbee's Beach WMA on Thanksgiving Day. The small Ammodramus sparrows are inveterate skulkers, making identification potentially pretty tough. However, with patience and an ounce of luck, you can work your way into their world and study the finer details. Here, the combination of gray ear coverts and a shawl of chestnut spots on the nape, rules out all other species. [Photo by Mike Crewe] 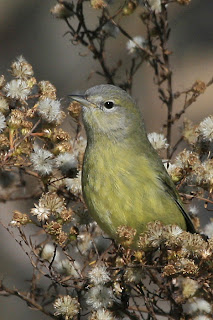 Orange-crowned Warblers are typically late-season migrants through Cape May. This one graced my yard on Thanksgiving Day and was followed by an awesome roast turkey dinner with good friends - what a day! [Photo by Mike Crewe]
This morning I tried my luck at St Mary's as there has been something of a trickle of Black-legged Kittiwakes at Avalon of late as well as one seen by Tom Johnson off Higbee's Beach on 22nd. I had no luck with that species but there was a reasonable backwards and forwards of Black and Surf Scoters, a few Long-tailed Ducks, Bonaparte's Gulls and Forster's Terns and plenty of Northern Gannets. Though it was relatively short, there was also a nice overhead movement of American Robins, Cedar Waxwings, Red-winged Blackbirds, American Godlfinches, House Finches and Eastern Bluebirds this morning and a Red-breasted Nuthatch was on Lincoln Avenue, which reminded me that this was only my third one for the fall! 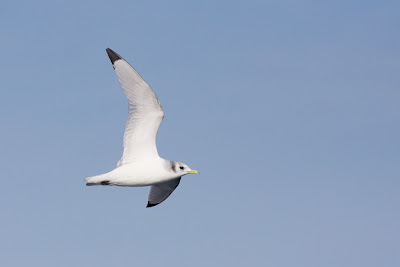 Black-legged Kittiwakes are worth looking for offshore right now. Note the 'dipped in ink' wing tips and dark shawl behind the head [photo by Tom Johnson]. 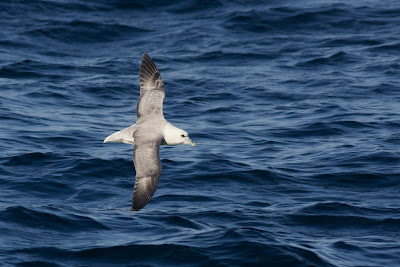 Something of a holy grail at Cape May, this Northern Fulmar was photographed on 19th during an offshore boat trip to the southeast, so was perhaps in Delaware waters. Though this species is commonly seen from land further north in its range, down here they seem to prefer to stay well offshore [photo by Tom Johnson].
The seawatch at Avalon has been remarkable all week - rather than repeat all of Tom Reed's counts, I would suggest you check out his posts on our View from the Field blog. I can't believe that there are any more Red-throated Loons north of us, they must just be sneaking round the back and flying by repeatedly just to annoy us!! Perhaps the most interesting bird at the seawatch this week (on 22nd) was an odd-looking gull which may well prove to be a Black-headed x Ring-billed Gull hybrid. Such birds have been reported before and, though it seems like a weird combination pairing, the features of the bird would support this idea. Stone Harbor Point seems to be holding good numbers of Snow Buntings right now, with a high count so far of 90 on 24th, when a Lapland Longspur was also with them. Up to six Ipswich Sparrows are also at Stone Harbor Point. The occasional single Cave Swallow gets reported from the state park, but so far there has been no notable movement of this species recorded this year. Down at the point, recent reports have also included a scattering of Baltimore Orioles (two up at Del Haven on the bayshore too), a male Redhead and a second male Eurasian Wigeon on Bunker/Lighthouse Ponds on at least 24th and 25th, and a Short-eared Owl flying offshore on 24th. 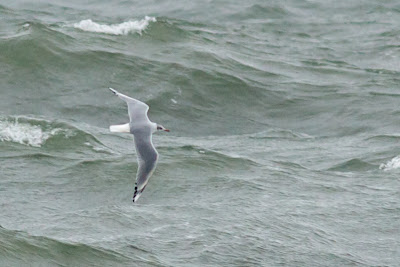 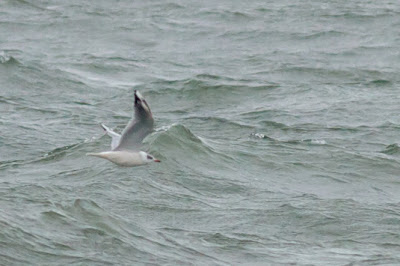 The above two photos show the odd gull off Avalon on November 22nd. The overall appearance is of a Black-headed Gull, but note the darker upperparts, extensive dark smudging on the head, the slightly heavy-looking bill and that odd, dark streak towards the tip of the outer primaries [photos by Tom Johnson].
Finally, I hear that the highly elusive Ash-throated Flycatcher was re-found at Cape Island Preserve this morning (26th).
Posted by Mike Crewe at 10:52 AM