A Farewell to Bebop 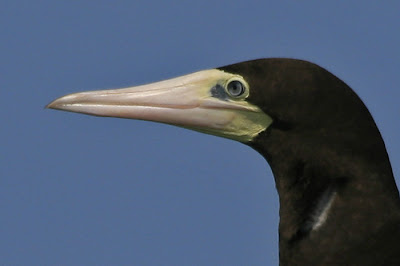 Most people will know by now, but I wanted to wait, just to be sure - our Brown Booby has finally left us. She was first spotted in Jarvis Sound in a blaze of glory, sitting atop the now-famous channel marker number 475 in glorious sunshine on August 20th. A wonderful apparition in brown and white with sassy, pale yellow feet. Panic ensued; we all had to rush over there as soon as possible to catch a glimpse before this exceptionally rare Cape May bird departed. Queues formed for boat trips out into the sound; Two-mile Landing did rather distant lip service for those without the time for a boat trip. Then everything calmed down; the bird stayed. She (for those face markings make this a she) became part of the scenery, became chummy with the local Double-crested Cormorants and moved back to hang out with them on some nearby wooden pilings. We could all relax, go back for better views, better photo opportunities.

Sadly, the inevitable day of departure had to come. A change in the weather, a big drop in nighttime temperatures and the anticipated message came through. On our Monday boat trip on October 31st, Bob Lubberman of The Osprey told us:


"AND SHE'S OUTTA HERE! This morning's totally awesome trip was highlighted by a meeting with a very determined looking Brown Booby passing us, going under the Two Mile Bridge and heading out towards the inlet and the Ocean. Apparently all the white slippery stuff associated with this morning's hard frost might have finally turned on a light bulb in our hopefully former resident booby's head that there are some differences between Jarvis Sound and The Caribbean Sea. Tell your friends in the Carolinas because I think she's on her way. She was not seen in the remainder of that trip or on the afternoon trip."

"Assuming she doesn't show again it couldn't be a cooler ending. She didn't just disappear. We were coming in from the inlet and she came down past the fishing boats in an area we had never seen her, went straight under the bridge past the dredge and headed straight out the inlet. We turned around and went back under the bridge up to the turn marker and looked in all directions but saw nothing. Ditto for all of her usual haunts in Jarvis on that trip and the next trip."

Though this was the first ever 'twitchable' Brown Booby in Cape May County, she probably never really achieved the heady status of our Ivory Gull of two years ago. Yet she gave great pleasure to so many and channel marker 475 (and sometimes 473!) will long be remembered for its famous visitor. Much thanks goes out to the captains of The Osprey and The Skimmer for keeping us updated on Bebop's presence and whereabouts and for ensuring people got great looks while respecting the bird's personal space. Oh, you may be wondering why she became known as Bebop... Well, on a number of occasions, folks using predictive text on the phones discovered that the four-letter banding code for Brown Booby - BRBO - would get changed to Bebop by their not-so-smart smart phones - so Bebop it is! 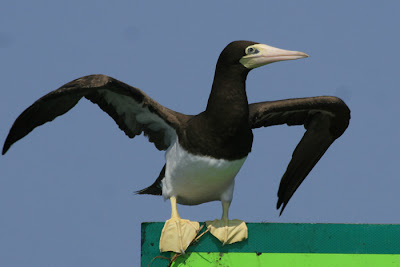 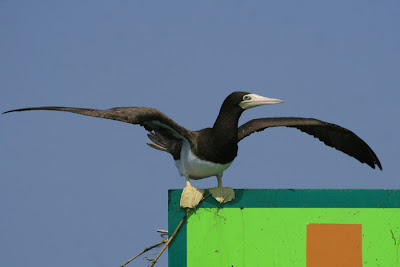 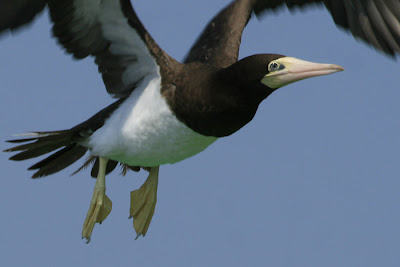 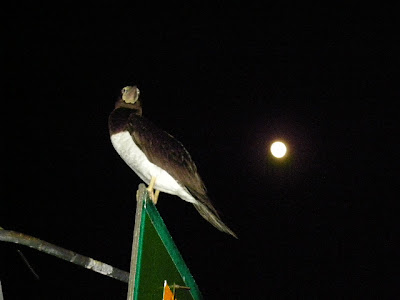 With Hallow'een only just behind us, we'll finish with a photo from Ginny Powell of The Skimmer - Bebop with a full moon.
Posted by Mike Crewe at 11:11 AM