So far, we are seeing a typical November, with late fall migration continuing and the arrival of winter birds - and all sprinkled now and again with a wanderer from some far off, distant location. The ponds at the point continue to fill up with ducks, though for some reason the two female Eurasian Wigeons don't appear to be drawing the cameras in quite the way that the males did last year!! I'm calling them females as they appear to both be paired with male American Wigeons, but as their molt continues this month, we'll see what happens!

The Avalon Seawatch continues to produce pretty much all of the sightings away from the immediate Cape May Point area at the moment, with Tom Reed reporting some pretty spectacular scoter movements this past week - check out some of the day count figures on our View From The Field blog and you will see what I mean! As well as late fall birds, there's a push towards the winterers now too, with Tom today reporting the first Black-headed Gull of the season, pretty much in line with the five Snow Buntings first seen at the point on 6th and still present on 7th at least, along with an 'Ipswich' Savannah Sparrow.

Stragglers from the fall also always feature during November and occasional reports of Yellow-breasted Chat (to 7th at least), Baltimore Oriole (7th), Blackpoll Warbler (8th) and Blue-gray Gnatcatcher (in my yard on 7th!) continue to filter in, while both kinglet species are readily found around the point still. 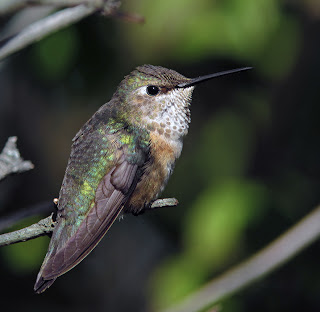 Despite being present for several days, the Rufous Hummingbird at our Center for Research and Education at Goshen has generally been rather flighty and camera shy, so Kevin Bolton did a great job in capturing this image of it. Though the critical tail features cannot be seen here, Ruby-throated can be ruled out by the extensive rusty wash to the flanks. This bird is still present as of today. 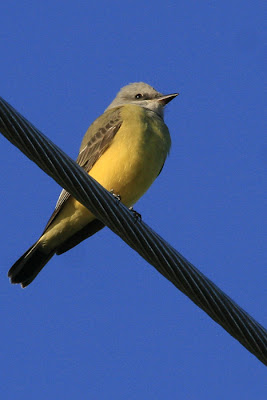 This Western Kingbird performed really well for three days on Sunset Boulevard to a steady stream of admirers - some of them curious passers-by! [Photo by Mike Crewe] 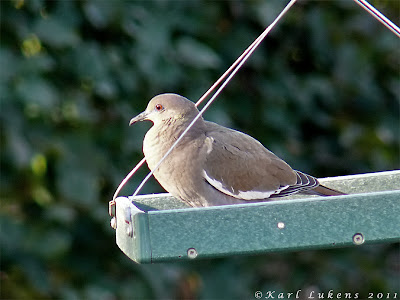 Karl Lukens won the latest round of the pigeon lottery with this White-winged Dove which initially was seen along the dunes at The Meadows, then at the Hawkwatch. This individual is currently being seen along Seagrove Avenue, either on roadside wires, or in Karl's feeder tray! 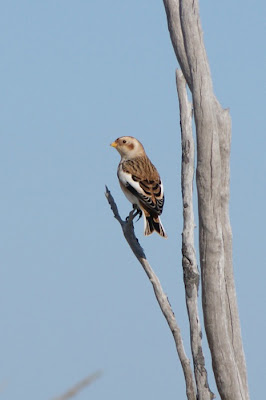 Singletons and small parties of Snow Buntings are turning up at coastal sites now, brightening many a chilly, morning stroll this bird was just north of Millman Boulevard in Del Haven on 7th [photo by Peter Bosak]. 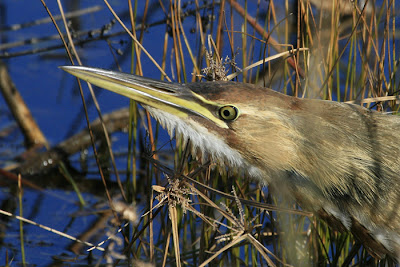 American Bitterns have been passing through Cape May Point in good numbers this fall and a few continue to be reported from local ponds. This bird drained the batteries of several Canons and Nikons at Lighthouse Pond this morning as it hunted right alongside the boardwalk near the viewing platform on the red trail [photo by Mike Crewe]. 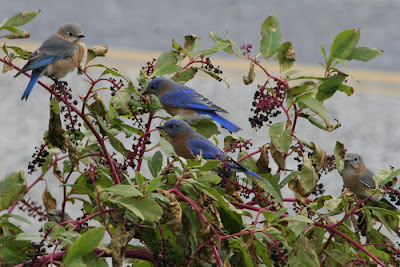 When you have put a lot of effort into starting a wildlife garden, it is always rewarding when the wildife actually decides to start using it! These five Eastern Bluebirds (look hard!) were part of a gang of 21 that fed on pokeweed and sumach berries in our front yard on 7th - so much better for them than the boring, labor-intensive lawn that had previously been there! [Photo by Mike Crewe] 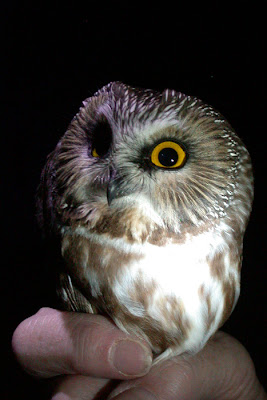 Owls are a tricky topic at Cape May; they benefit best from not being disturbed at daytime roosts, but have a sneaky habit of being out and about when we are not, ie, after dark! Whilst we do not publicize the whereabouts of owl roost sites, you can sometimes get lucky if you just remember that November is a great month for owls and migrants may be active at dusk. If you are down this way during early November, it is always worth checking at the Northwood Center to see if the owl banders are offering any viewing opportunities. Above is a photo of my lifer Northern Saw-whet Owl, proudly being held by owl-bander Katy Duffy [photo by Mike Crewe].
Posted by Mike Crewe at 1:11 PM