It's that man again!

Yes, it's that man again - Jimmy Dowdell, taking his dog for a walk and finding the first Ash-throated Flycatcher of the year south of the canal. I wouldn't mind so much if it wasn't for the fact that the rest of us have been tearing the place apart looking for one for weeks! Today's bird graced the western edge of The Nature Conservancy's Cape Island Preserve. This is a smallish tract of land, accessed from the east end of Wilson Street, off Seashore Road in West Cape May. If you go looking for this bird, please note that there is no parking area here and just a small amount of room for on-street parking.

Among other news this last couple of days, Cedar Waxwings, American Robins and Eastern Bluebirds continue to flock around the point and provide a fabulous spectacle. Best numbers seem to be around the state park and Cape May Point itself, as well as in the open areas around Cox Hall Creek WMA. Three Eurasian Collared Doves continue around Lincoln Avenue at the point and reports of single Nashville Warblers have come from the state park and Cox Hall Creek, with Blackpoll Warbler also still lingering at the state park and an Orange-crowned Warbler at Cape Island Preserve today. One or two Purple Finches are starting to turn up at local feeders now, after a few days of high-flying birds overhead. Continued diligence at the Hawkwatch Platform today produced five species of swallow (Bank, Cave, Tree, Northern Rough-wing and Barn) and a passing Golden Eagle, while Bald Eagles continued a presence at several sites - at least three could be seen over The Beanery at lunchtime for example. The Rufous Hummingbird was still present at CRE, Goshen today and Bob Fogg reported a Clay-colored Sparrow at the Schellenger Tract off Bayshore Road in Del Haven.

The Seawatch at Avalon continues to produce daily good sightings at the moment and I'm indebted to Tom Reed for keeping me kept up to date on sightings there. At least two King Eiders, three Razorbills, Black-headed Gull, two Red-necked Grebes, White-rumped Sandpiper and Marbled Godwit have all been logged in the last three days and large movements of Ring-billed Gulls and Northern Gannets have been enjoyed. 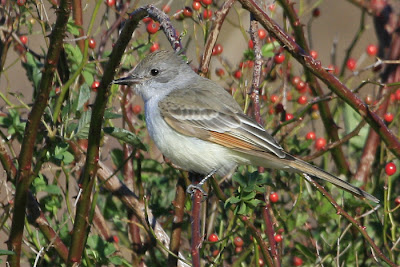 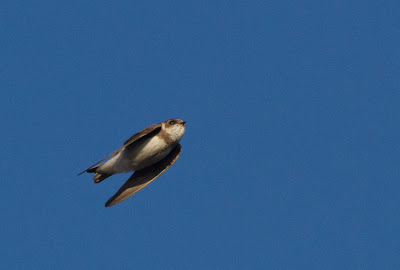 Bank Swallow - one of an impressive list of five species of swallow at the Hawkwatch Platform today [photo by Tony Leukering].
Posted by Mike Crewe at 6:44 PM