Waxwings continue - and other observations

The wonderful flight of Cedar Waxwings continued today, though in lesser numbers than yesterday. Check out this link on youtube which Jenny Isaacs sent me. It was taken in Avalon and shows a wonderful gathering of Cedar Waxwings, coming to drink at a broken water pipe.  Our Wednesday morning walk saw several hundred birds wheeling around the state park, along with American Robins, European Starlings, Brown-headed Cowbirds and smaller numbers of Eastern Bluebirds, Yellow-rumped Warblers, Common Grackles and House Finches. Four Tundra Swans were noted (one on the Plover Ponds - which as been around for a few days - and three flying over) and a juvenile Bald Eagle was hanging out on the beach scaring all the Great Black-backed Gulls - about time someone did that! Just after the walk, single Blackpoll and Nashville Warblers and a Red-breasted Nuthatch were by the Hawkwatch Platform. 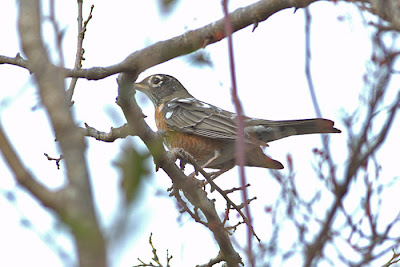 With all the American Robins around at the moment, someone was bound to spot a weird one! This spotty robin with a patchwork of white feathers on its upperparts was at Cape May Point on Tuesday. [Photo by Scott Whittle] 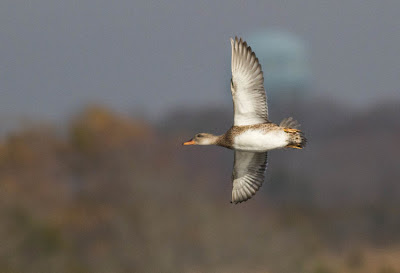 Ducks continue to be the main attraction at the state park right now and those who have been on my recent walks there will know that I like to use the white belly on a female Gadwall as a nice feature that separates them from the rather similar female Mallards. This photo, taken from the Hawkwatch Platform shows that feature very nicely in a great action shot taken by Tony Leukering. 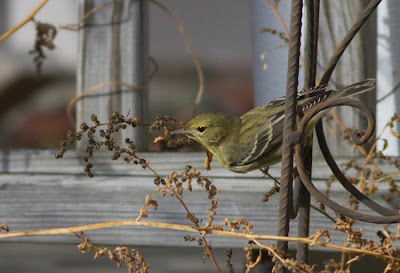 Small numbers of Blackpoll Warblers still hang on around Cape May Point as a reminder of what a fabulous fall it was for them here. This bird, looking for food amongst garden weeds is a fine example of just how tolerant they have been of photographer's lenses! [Photo by Tony Leukering] 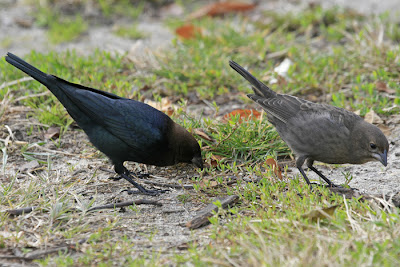 Despite all their misdemeanors, Brown-headed Cowbirds are pretty smart birds when you see them close up. A large flock of several hundred birds is currently in the state park with even larger numbers of European Starlings. When seen feeding together, look for the cowbirds' telltale sticky up tail! [Photo by Mike Crewe] 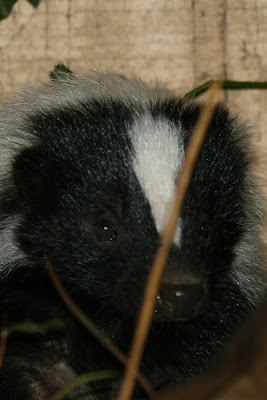 I got home a few nights ago to the sound of much rustling in the leaf litter right outside the back door, so went to investigate after first grabbing the camera (well you would, wouldn't you!). I was faced by this little stripey-faced chappie poking out from under our garden shed... 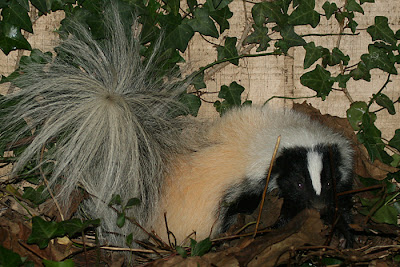 The great thing about skunks (yes, I really did write that!) is that their eyesight is pretty poor so you can stand six feet away from them and they don't even seem to know you are there - though I wouldn't recommend suddenly startling them! Striped Skunks are very variable in color and this one is well towards the whitest end of the spectrum of variation. Last night I saw the complete opposite in Cape May - a skunk that was completely black but for a tiny white tip to its tail!
Posted by Mike Crewe at 5:18 PM