It's always nice to get pictures from our many visitors, who always seem to leave Cape May with sand in their shoes - which means they will return some day. Here's a few I received recently. 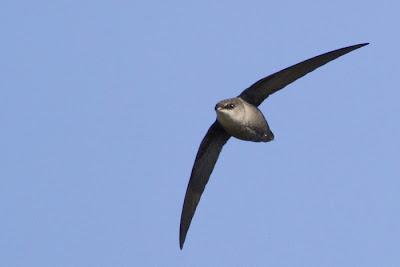 Sam Galick sent me this truly amazing picture of a Chimney Swift and we present it here in celebration of an amazing day on Saturday when more than 500 of these 'flying cigars' were tallied passing through Cape May Point. A remarkable event so late in the season. 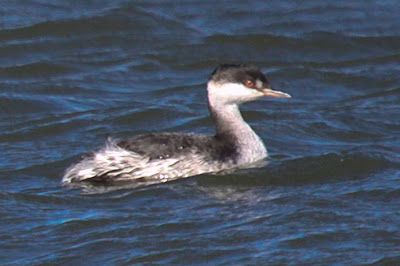 Horned Grebes like to hang out in the main channels and are not always that approachable, so Mike Newlon did a nice job getting a photo of this guy from The Osprey last week. 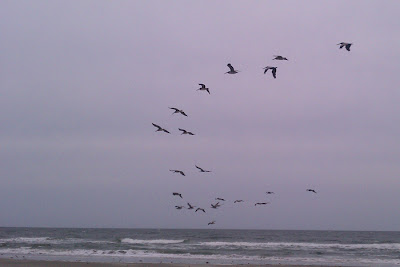 Wildwood resident Dave Fleming snapped this wonderfully moody shot of 23 Brown Pelicans with his phone while on the seafront. It's been a great autumn here for this species with good numbers passing in late September and early October. 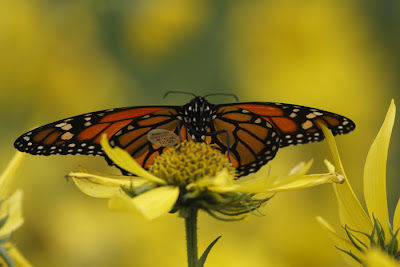 And of course, Cape May migration is about more than just birds; Linda Widdop sent me this great photo of a Monarch nectaring at the Giant Sunflowers in the state park - and look, it's got one of our tags on it!! Don't forget to keep an eye out for Monarchs with these little round tags stuck on the underside of a hind wing. Most tagging projects rely on people spotting and reporting the Monarchs as they head south. (Don't forget to note the number on the tag!) 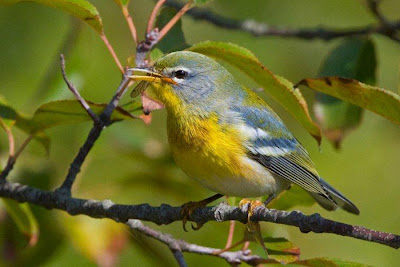 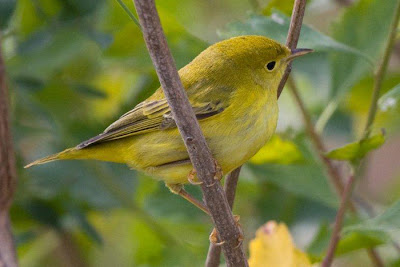 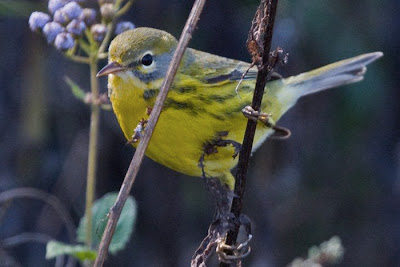 We finish with three pictures from David and Susan Disher from North Carolina. Warblers may be subtly less colorful in the Fall than they are in Spring but you sure can see them better this time of year! Here are fine portraits of Northern Parula, Yellow Warbler and Prairie Warbler. The last two are pretty much done heading through here now so these are nice finds (the Prairie Warbler was seen October 17th and the Yellow Warbler on 18th).
Excitement builds as we head towards this year's Autumn Weekend Birding Festival and there is still plenty of birds to see - with a very promising forecast for the weekend itself! The Hawkwatch Platform was aglow with excitement when I stopped by a short while ago, as a dark morph Swainson's Hawk had been showing itself spectacularly well to the gathered admirers. A steady stream - yes a stream! - of Northern Harriers was breezing through, along with an even greater number of American Kestrels and Merlins. Bald Eagles? Yeah, they were there, you know, you see them every day now!!!
Bunker Pond is filling up nicely with a good selection of ducks, plenty of Pied-billed Grebes, and I counted 118 American Coots - and no sign of that Coot menace from last year yet...
Posted by Mike Crewe at 4:33 PM