Higbee's Beach was certainly alive with birds today (see, I told you to get down here!), with Tom Johnson recording some 15,000 Yellow-rumped Warblers on the Morning Flight Project at Higbee Dike, as well as an impressive show of other birds, including Blackpoll Warblers, American Robins and the first notable passage of Hermit Thrushes for the season. Yesterday's dark morph Swainson's Hawk arose early from somewhere in the Hidden Valley area and headed out early - though not before making a pass at the Hawkwatch Platform. As for the fields at Higbee's... Well it took us some time just to walk the last few yards of road to get into the fields in the first place, as wave after wave of Yellow-rumped Warblers, Ruby-crowned Kinglets and White-throated Sparrows poured across in front of us. Eastern Towhees were calling in impressive numbers from deep in cover and good numbers of Chipping Sparrows and American Robins were present too. We spotted a Swainson's Thrush high in a Virginia Creeper, then shortly after we were distracted by little parties of Palm Warblers (mostly the yellower Eastern form) and a smart Blue-headed Vireo. We didn't get as far as we had intended, but we didn't need to, for the birds came to us! One little corner of Porcelainberry harbored eight Hermit Thrushes, as well as several Gray Catbirds and Brown Thrashers and single Yellow-billed Cuckoo, Magnolia Warbler, Yellow-breasted Chat and Lincoln's Sparrow. Further on, we came across a second Yellow-billed Cuckoo and heard about a second Yellow-breasted Chat, while kinglets and warblers continued to entertain the gathered admirers.

At the Hawkwatch, there was plenty of overhead action throughout the day and, besides a great day for hawks on the move, Chimney Swifts put on an excellent show - perhaps surprisingly so given the late date - and that inveterate counter, Tony Leukering had tallied some 500 of them by the day's end. Northern Rough-winged Swallows were notably in good numbers too and certainly outnumbered Tree Swallows at the Higbee fields this morning. Other highlights today included a Vesper Sparrow briefly at the Hawkwatch, an unidentified Selasphorus hummingbird at the CMBO Goshen Center, a Grasshopper Sparrow reported by Bob Fogg from the Schellenger Tract (Del Haven) and a Red-breasted Nuthatch at the Northwood Center - the latter species has been remarkably scarce here so far this Fall. I haven't heard from the Seawatch yet today, but take a look at yesterday's figures here and you'll see that things are pretty busy up there at the moment... 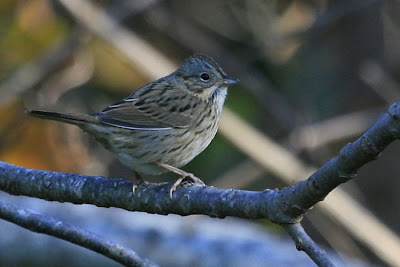 A heavy wave of sparrows this morning made up for a shortage of these birds over the past week or so. This Lincoln's Sparrow was our prize find amongst the hordes of White-throated, Song, Swamp, Field, Chipping and Savannah Sparrows [photo by Mike Crewe]. 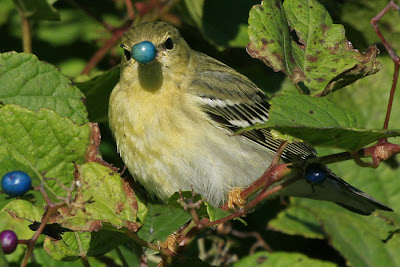 It's probably rude to take someone's picture when they are busy eating... 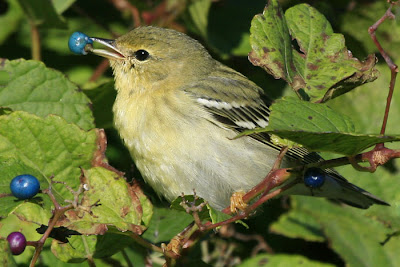 ...but this Blackpoll Warbler just posed so nicely in the Porcelainberry [photos by Mike Crewe]. 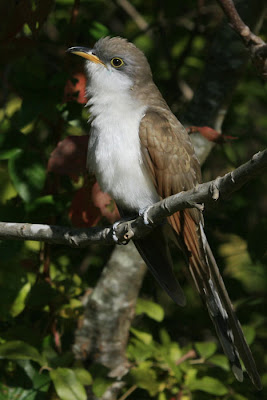 Our second Yellow-billed Cuckoo this morning proved to be very popular with photographers as it actively hunted crickets and other insects along the edge of the second field at Higbee's Beach. Indeed, it was so approachable... 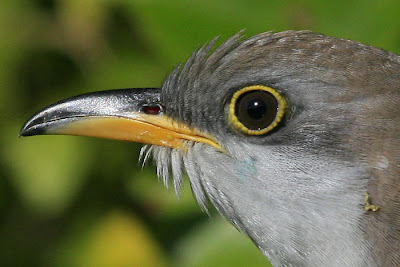 ...that sometimes it seemed almost too close! And no, this bird isn't in the hand, it really is in the bush!! [Photos by Mike Crewe] 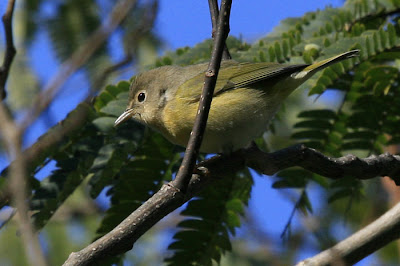 Our garden came up trumps again before work this morning with a nice range of birds, including this Nashville Warbler [photo by Mike Crewe].
Posted by Mike Crewe at 6:14 PM