For those taking part in our Autumn Weekend who may not have been present at the meal this evening, please not that, due to the severity of Saturday's forecast, we have deemed it necessary to cancel the mini-pelagic on the Cape May Ferry and the backbay boat trips. If you are signed up for any of these events and need an update, please contact CMBO on the usual numbers.

Note also that Kevin Karlson's 12 Noon outdoor photography session has been moved to 1:00PM on Sunday and that a special indoor seawatching event has been set up on the fifth floor of the Grand Hotel - just in case!!

All other events are expected to take place as scheduled - and who knows, maybe we will dodge the worst of the weather!

Today proved to be a fabulous opening day for the three-day festival with White-winged Dove, Rufous Hummingbird and Clay-colored Sparrow being rarity highlights on a morning that saw a fabulous rush of American Robins, Yellow-rumped Warblers, kinglets and assorted sparrows (including Vesper Sparrow at The Beanery). The Seawatch at Avalon really excelled, finishing with a day total of some 75,000 birds, including 62,000 scoter. Other highlights there included a high total of 13 American Golden Plovers passing south. At least three American Moorhens were reported today, as well as the first Fox Sparrow I have heard of this season. 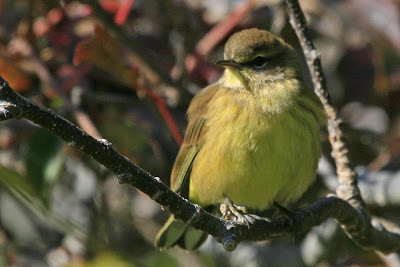 Palm Warblers were much in evidence at Higbee's Beach this morning, with all but one of those that we saw on our second walk this morning being of the Eastern race (hypochrysea), with an extensive yellow wash on the underparts [photo by Mike Crewe]. 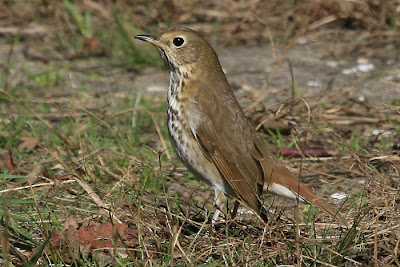 Hermit Thrushes put on their first good showing of the season this morning. This species bucks the trend of Catharus thrushes by showing itself to its admirers instead of skulking in the shadows somewhere! [Photo by Mike Crewe]
Our 'flying things other than birds' walk proved almost a complete luck-out due to the cool and overcast conditions, but was redeemed in spectacular fashion by the discovery of a very obliging Black Witch right at the start - what an awesome place this is!! 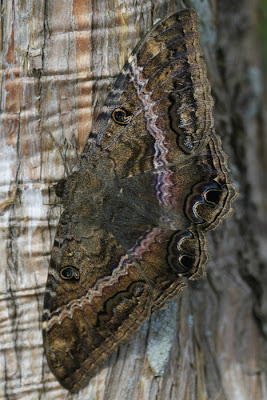 Black Witch (Ascalapha odorata) at Cape May Point State Park this afternoon. This species is a large tropical moth with a wingspan of up to six inches (that's longer than a Palm Warbler!) and is the largest owlet moth in North America. Despite its tropical distribution, it is prone to vagrancy and has been recorded from all 50 US states and Canada. It is overall most rare in the north-east however, and this is probably the first Cape May record for a number of years. The narrow, pale pink band on this individual indicates that it is a female [photo by Mike Crewe].
Tomorrow's forecast doesn't bode well for a day spent out in the field but remember, forecasts can be - and often are - wrong. Our guides will be out there, we look forward to seeing you. Fingers crossed!!
Posted by Mike Crewe at 9:43 PM