I think it's fair to say that we have fun on our walks; we see plenty of great birds without needing to take it too seriously. So it's not surprising that last week we coined a new phrase - Emelia Birds. What are Emelia* Birds? Well, they are birds that are always flying away from you when you see them. There they go, disappearing over the dune top or behind a pavilion roof. Now Karl* Birds are different, they fly towards you and disport themselves in all their glory! So last week, Emelia birds were pointed out to us by Emelia and we saw the tails of Black Skimmers sneaking away behind us; Karl pointed out Black Skimmers to us and they graceful arced their bills down into the water and cut neat lines right across the Plover Ponds. You get the idea...

So today on our Wednesday walk, Emelia Birds were in evidence even when Emelia wasn't there! A bunch of 11 ibises approached and were clearly dropping in to land on Bunker Pond. So clearly, that when I first scanned through them, I quickly fell upon the tell-tale pink face with broad white surround of an adult White-faced Ibis among their number. We were going to get great views of this bird in the scopes - or so I thought! As they emerged on the other side of a line of bushes, they were already powering off towards Pond Creek Marsh - Emelia Birds without a doubt!! Immediately after this, four shorebirds shot right past us, revealing white rumps as they - inevitably it seems - quickly became Emelia Birds! They were White-rumped Sandpipers alright but they really weren't behaving for us this morning! Our walk finished with the ultimate Emelia Bird trick - two Caspian Terns that turned up the very moment that the last walk participant had just turned the corner out of the parking lot!

Of course it wasn't all like that and we enjoyed great scope views of two American Oystercatcher chicks that were just a few days old, tottering around on the beach with their parents, a pair of Cedar Waxwings carrying nest material and some very obliging Blue Grosbeaks and Indigo Buntings among others.

* Note that names may, or may not, have been changed to protect the innocent - or guilty... only those who were there know the truth!

Recent Bird News
A White-faced Ibis has headlined a series of good birds at Brigantine over the first few days of June and maybe was the same bird that flew through Cape May Point today. Brigantine also had Marbled Godwit and American Golden Plover recently - both scarce birds here in spring. Dave Lord tells me that the Semipalmated Sandpiper show remains good on sandy beaches in Cape May Harbor, as seen from our scheduled boat trips, while Tom Reed reported a late Wilson's Warbler in Avalon on June 2nd. Other wandering warblers of late have included Northern Parulas in song at Cape May Point, Cape May Point State Park and Head of River and a Yellow-throated Warbler (not surprisingly with white lores) at Cape May Point on 4th. A Least Flycatcher was somewhat unexpected in the state park on 3rd, while the three Eurasian Collared Doves continue to attract attention at Cape May Point. Elsewhere, the breeding season progresses with Indigo Buntings and Blue Grosbeaks showing well at our usual weekly walk locations and a trickle of late shorebirds passing through included a nice group of four White-rumped Sandpipers at the state park this morning. 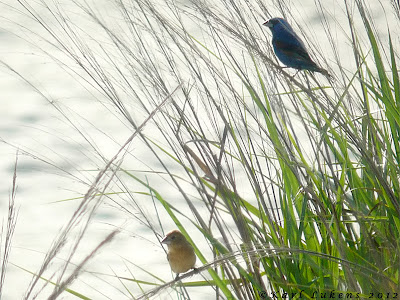 Blue Grosbeaks are a nice feature of a summer's day around Cape May - this pair fed on old grass heads on the South Cape May dune today [photo by Karl Lukens]. 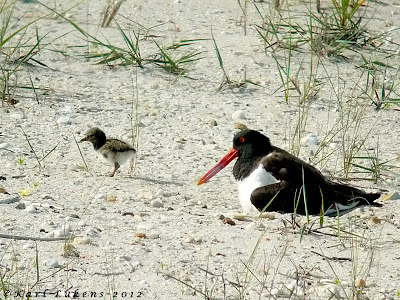 Success at the beach can be measured by the patter of tiny feet on the sand! One of two still-doddery American Oystercatcher chicks seen on the South Cape May Beach on our morning walk today [photo by Karl Lukens]. 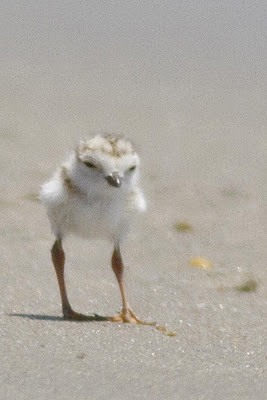 Cute, or too much like a Gremlin?! A baby Piping Plover braves a new world at the South Cape May Beach [photo by Sam Galick]. 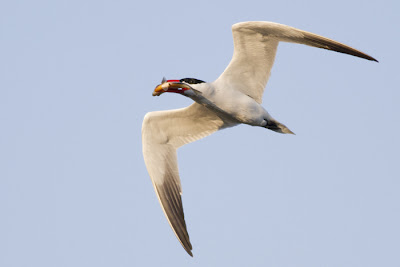 Caspian Tern is certainly not a common bird at Cape May Point during the summer months, so a pair continuing to show breeding behavior here is very interesting [photo by Sam Galick]. 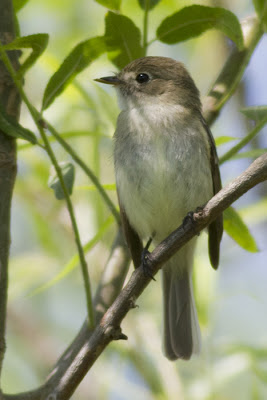 I mentioned in a recent post that June is a good time for surprises and wandering, off-course migrants such as this Least Flycatcher at Cape May Point State Park are out there to be found... (note the slightly odd-looking bill on this bird, which seems a little too long and may be the result of a damaged tip [photo by Sam Galick]. 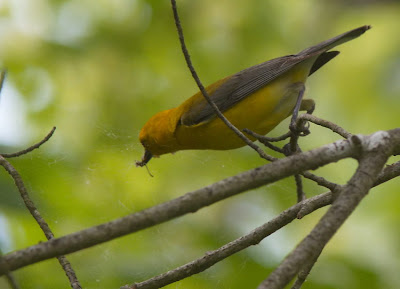 Of course, whatever the time of year, there is always interesting bird behavior to be noted. This Prothonotary Warbler was stealing insects from spider webs at Cox Hall Creek WMA recently - a bit like going to the convenience store [photo by Tony Leukering].
Posted by Mike Crewe at 5:39 PM